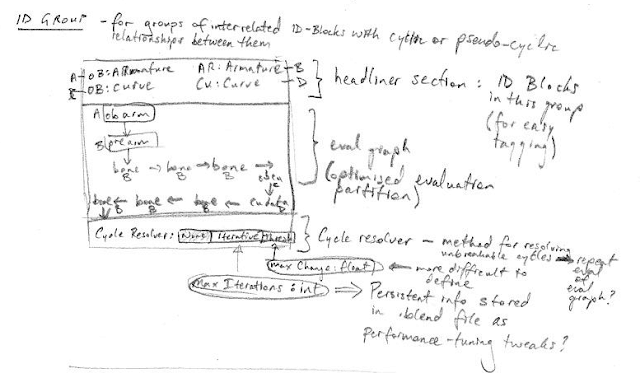 If you'll recall from the Granularity Problem, we often have phantom cycles when it appears that two or more objects are interdependent on each other (i.e. they each rely on each other in a bit of a “mexican standoff” type of situation), thus forming a cyclic dependency between them. Groups of objects in such relationships are basically “strongly connected components” (loosely speaking). The problem with such groups of objects though is that when you come to try and find a way to order them, you can't really find any ordering which will truly satisfy all the dependency relationships, especially if you only want to evaluate each item once. 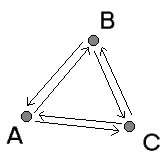 As you may know from experience, after running through such cycles a few times (i.e. by frame stepping, as mentioned before), the relationships generally tend to “converge” to a point where they are in near equilibrium (i.e. all relationships are balanced out so that things don't change too much – or at least to a largely imperceptable level – between runs, even if some of the individual links in the chain aren't exactly obeyed fully).

So, the question now becomes: Since we can't find any single-pass “linear” method to reliably and correctly do this, how can we perform operations on these cycles in at least some form of “controlled” manner?

Perhaps one of the first things we need to do in order to manage these beasts is to realise that, in order to enable some degree of control over the cycle-evaluation/resolution process, we must identify and separate out these nodes from them overall dependency graph in some way. Indeed, our current dependency graph implementation does this, and the implementation docs also mention this (see fig2 in particular). However, where we differ from that implementation is in what we do once we find those components.

Let's look at another example.
1. Here we have a standard, data-orientated depsgraph with coarse-grained granularity. Note how nodes A and B in this state look like they refer to each other, forming a cyclic dependency between these two nodes. 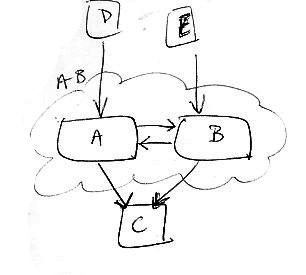 2. Let's round up these interdependent nodes, and replace this with a single node – the “AB Complex” – representing this cluster of closely related dependencies, thus isolating and grouping them together for further analysis and handling: 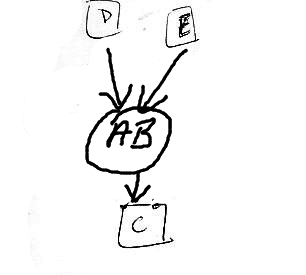 3. With these nodes gathered together, we now know that they are in a tight relationship with each other, when viewed from the current granularity. This could mean that either there is a phantom cycle or a genuine cycle. In any case, we've isolated these from the general graph, so at worst, we only have to cycle (or evaluate) this sub-graph several times to get it working (i.e. we've got a smaller problem than before). Since most of the problems we've been having are really just phantom cycles – where from user perspective there are no cycles, but from Blender's perspective there were due to coarse granularity – we can apply our little “explode then interleave” trick to see if we can create a little sub-graph that neatly eliminates the whole problem (but only if we remember that this set of objects will have to be evaluated together). 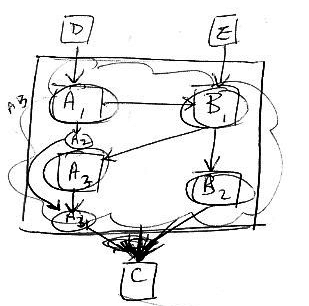 A Side Note about Implementation Concerns and the Generality Goal

This method of isolating out little sets of tightly-coupled entities is one of the reasons why we need to get rid of the current set of handler-functions like object_handle_update() (and the loopers on scene-level which call this). Although these types of groups act somewhat like replacements of those (except that instead of iterating over objects at toplevel, we iterate over these groups, which then dispatch out evaluation steps), they also have the potential of being more general than those old static functions.

That is, any cluster of ID-Blocks can be bolted together like this, to be evaluated as their interdependencies dictate, instead of only by a fixed order (which sometimes screws up). Thus, it seems that these groups can also extend upwards, and also cover the “Generality” goal – evaluating the current application state becomes merely a problem of figuring out how to schedule up these groups (which are wired together so that their dependencies will be evaluated in a way that doesn't result in phantom cycles).

Groups within Groups...
Some of you may be wondering at this point what happens if for whatever reason there ends up being yet another granularity/phantom cycles problem between groups (due to the way they were partitioned).

On one hand, these situations shouldn't happen at all, since as soon as two coarse blocks tightly interdepend on each other, we simply clump them together into one group, and then hook up their components within that group's evaluation graph so that they don't have any problems. Here, blocks can be ID-Blocks, but could also potentially be between an ID-Block and a group, in which case the ID-Block gets folded inside the group.

On the other hand, there's still a conceptual advantage/simplicity to merely restricting these situations to groups of ID-Blocks. However, if we had a tiered system like this, we'd eventually need to flatten them out somewhere to yield the flattened graph. Having said that, we'd get benefits in terms of being better able to sub-clusters within a group, which can further be treated semi-autonomously (i.e. perhaps more opportunities for topology-driven parallelism here).

Size of Graphs
The other concern perhaps is that these groups end up in rather large graphs. While it's true that we could end up with perhaps one or two really massive graphs corresponding to these groups and then a few smaller ones for the leftovers, at the end of the day, we're still breaking down/reducing the size of the problem, even if not by very much!

What about leftover ID-Blocks
I briefly mentioned “leftover” ID-blocks earlier. Ultimately, I think we're going to end up with a few of these (or perhaps many in simple acyclic situations). For these, they'd still end up as single-entity groups. This would result in a composite-like situation (though slightly weird).

Having talked for a while about these “groups”, what exactly do I mean? The following diagram aims to show the main components that we have:

In short, each group consists of 3 sections or components:

Refer back to “What's in a Node? → Split-Hierarchy Model” for how this corresponds with the model presented there.
Posted by Aligorith at 1:44 PM