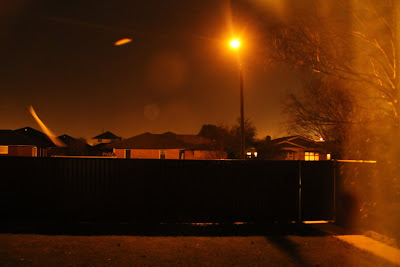 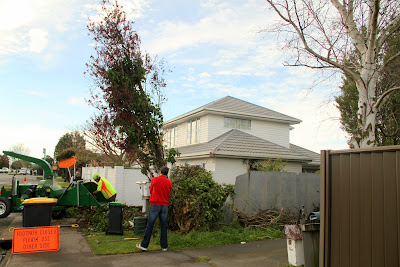 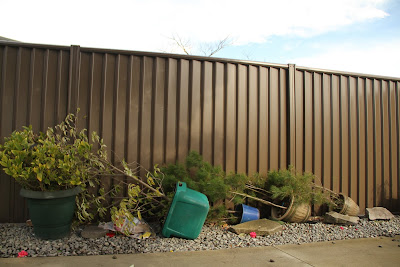 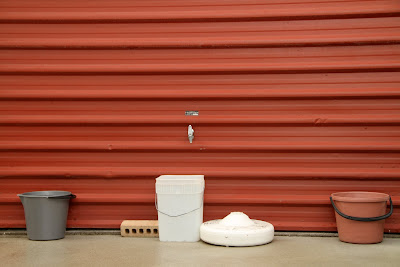 Last night, the Christchurch/Canterbury region was struck by strong "Nor'west" winds. As any Cantabrian knows, the Nor'Wester is one hell of a wind, known for being very strong/blustery and bringing warm and dry conditions (to be followed within the next few days by a cold snap). Indeed, last night, at midnight, it was still over 18 deg Celcius, which is quite something, considering that it is almost never 18 deg Celcius at midnight here in Christchurch, except for one or two nights tops in the middle of summer, but definitely not in Spring!

For most of the evening, the lights were flickering (as they do, whenever the wind speeds pick up a bit - I always imagine those main lines on the towering transformers swaying around and almost clanging into each other in the breeze), coming close to going off completely once or twice. Apparently in other parts of town, people weren't quite so lucky, with power being lost to many homes. Despite this, there didn't seem to be any wind at all; at least not that you could tell looking out the window or listening for the tell-tale whooshing/howling noises, or the low C/G sound that the spouting seems to make everytime the wind picks up nowadays.

However, by 10pm, things started picking up. First there was the howling noises. And then, there were the sudden gusts, with one of these blasting into the house with such force that for a moment it felt like the walls were about to implode! Looking out the window, there were things flying through the air everywhere! The two smudges in the image above were in fact plastic bags and newspapers. Here it doesn't look like much, but just minutes earlier, there were heaps of these things blowing about in the air. 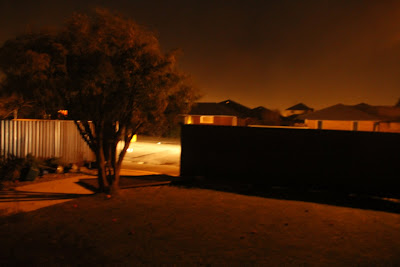 The awkward moment when you realise that the wind has just blasted out your locked and clamped front gate...

As the wind continued to howl, there were suddenly two loud bangs. One of these sounded like something had crashed into some plants. The other, it soon became apparent, was our front gate, which had been blasted out of its fittings by a very strong blast of wind. This was quite a surprise, as the gate had been held in place by several different clamps and locks. Surely it wasn't possible for it to have just come out like that!

Although the wind was still blowing quite strong out there, we ended up heading out to investigate what was going on out there. Leaving the gate just lying there on the driveway didn't exactly seem like such a great idea: for one thing, it could very well become a lethal projectile during another really strong blast of wind, and secondly, prior experience suggests that it's not great to have no locked gate at night when rowdy bands of drunk and/or naked students are charging down the street on stolen supermarkert trollies.

It soon became apparent though that it wouldn't be possible to put the gate back up that night. As we started trying to prop it up, we noticed that one of the roller-fittings at the top had been sheared upwards. (Besides, it wasn't until making a second trip out to find a better way to secure the garage door that I noticed that the other roller-fitting was now dangling limply from the fence). Given that these are made out of rather-stiff metal, it was obvious that this wasn't something which could be fixed quickly. So, we ended up settling on moving the gate to another place where it was going to be out of the wind a bit. 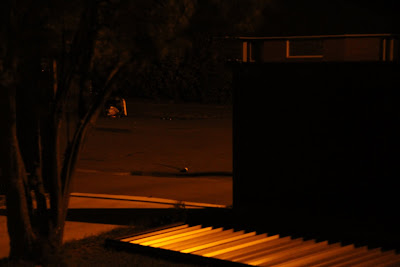 Gate moved off to the side. On the road, all the wheelie bins which had been put out on the kerbside for the fortnightly recycling collection run had all been toppled over, spilling their contents out onto the ground (and by extension, up, up, and away - landing all over the garden, and sometimes flying several blocks away).

With the wind continuing to howl, the lights constantly flickering, our modem on the blink (it tends to be really sensitive to power fluctuations), and thunder in the distance, I decided to call it really early night for the first time in ages.

Aftermath
Early this morning, it started to rain heavily. The rubbish trucks came on schedule, and somehow proceeded to empty (what was left in)  the bins lining the road. (The "runner" guy must have had a hard shift this morning!). A few hours later, the rain stopped, and cleared, leaving a nice fine morning (or so it seemed... the humidity in the air should have given it away...) 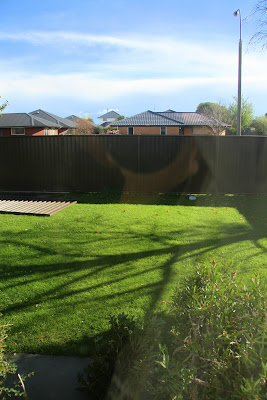 
Then there was the sound of chainsaws. Apparently, a neighbouring tree had fallen over, destroying the fence beside it, blocking a shared driveway. 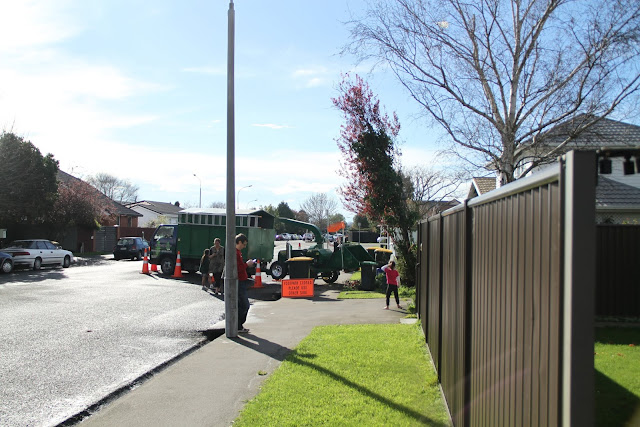 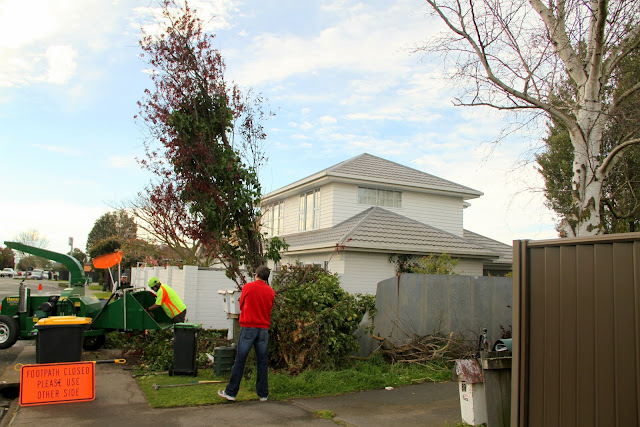 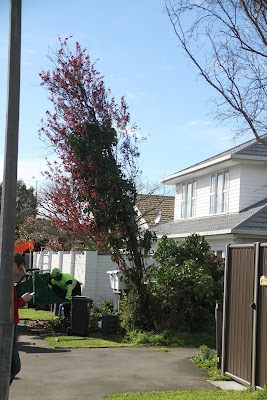 All that was left of the tree at the time. It's now completely gone.


Getting back to our gate: in broad daylight, the extent of the damage was much clearer: 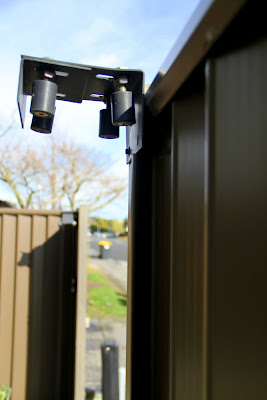 The part which got sheared upwards... It must've taken quite some force to bend this! 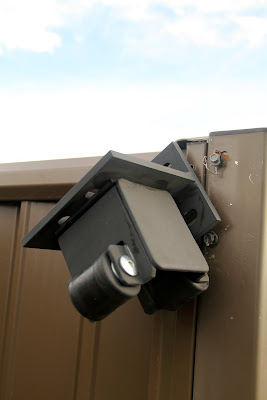 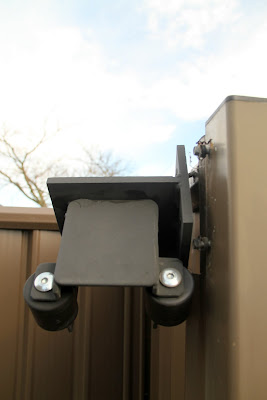 Dangling by a screw - the catcher part on the other side was nearly thrown off its moorings after the wind broke the (at least) side flaps off the washers.

Fortunately, I found that it had at least lifted the gate clear from the latches without causing serious damage to either (or at least that's how it appears on initial inspection).


And to finish off, here are a few shots from around the place: 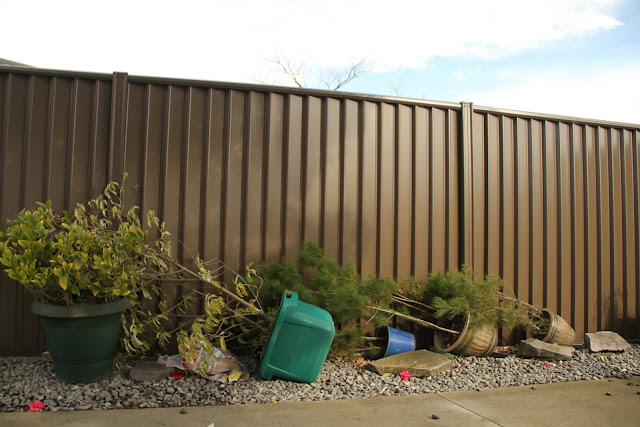 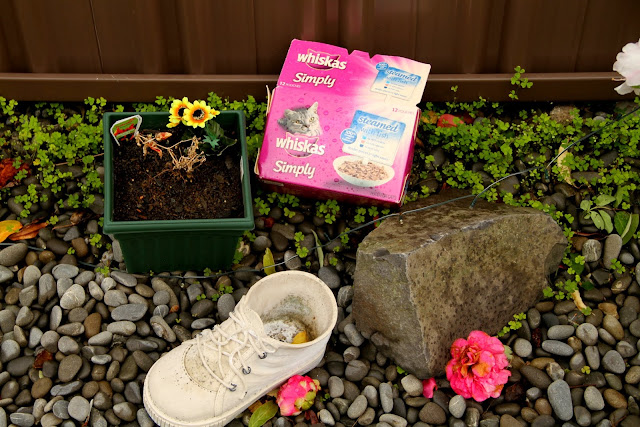 Look what the cat dragged in... 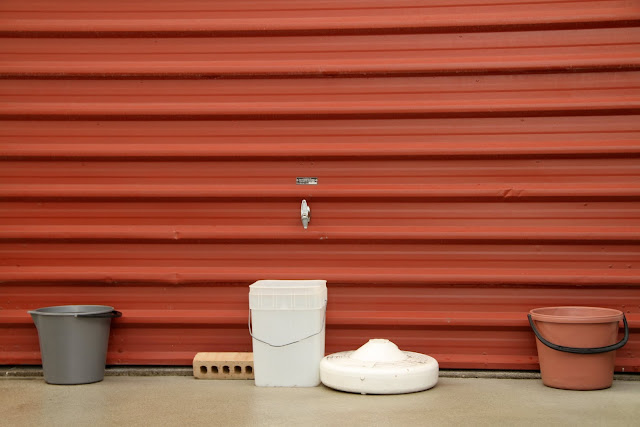 We ended up holding the garage door in place using a few buckets full of water. The door won't exactly close firmly (and if it does, it becomes un-openable later).


While it was still sunny when I headed back inside, within minutes the weather had turned again, and we got another little rain + thunder storm which lasted an hour. Then, it all cleared up perfectly fine again, as if nothing had happened!

All that in a day of weather.
Posted by Aligorith at 3:12 PM