This has been a weekend of mysteriously malfunctioning/misbehaving locks and springs... 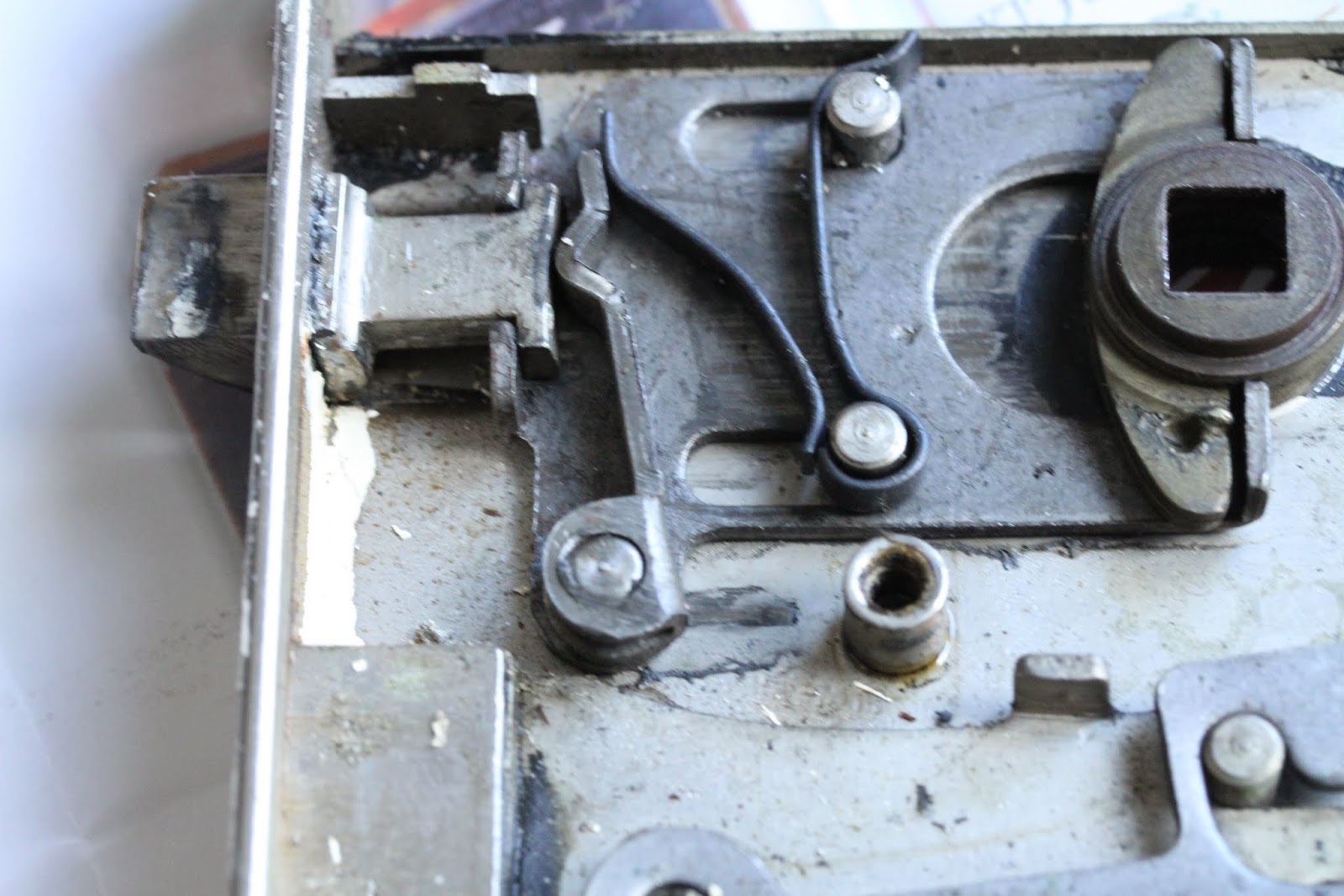 First up, the driver-door lock on one of our cars has been playing up:
So, it's been a bit freaky/annoying at times getting in and out of it this weekend, not knowing whether that time will be when it decides to give up the ghost and lock us out (or in!).

To add to a weekend of lock weirdness, this evening, I noticed that the latch on an old internal door lock we've got here had suddenly started working again. To be specific, the little nub - that sticks out of the socket (when the handle is turned/not turned) to stop the door from just bursting out of the frame - was sticking out (as it should, if it was working) and had resistance to the touch!

This would be not too remarkable, were it not for the fact that I had done some DIY repairs on that lock mechanism (pictured above) about 2-3 years ago (Nov 2012), AND that those repairs (while working quite well with substantially fewer components) only lasted between 2-5 days of relatively light use, before suddenly the locking mechanism no longer worked (i.e. the nub stayed inside its little house, and if it did poke out on a rare occasion, it was limp).

So, here's a bit more back story: About a year or so prior to me trying to fix it, we had a locksmith in to try and fix it. He struggled with it (and another one like it) for ages, before finally getting it working again. The fix lasted a few months, before, suddenly one day, it stopped working. When I finally decided to investigate for myself that November day, I finally found out why it had failed: that black V-shaped strip of flexible metal had snapped (just above the lower round nut), probably from metal fatigue. No wonder it may have posed troubles for a locksmith (who probably normally only encounters locks containing springs!)

At the time, I wanted to try using my long-forgotten soldering iron to maybe try to melt those pieces of metal (they were stiff to the touch, but soft/flexible enough to be bent back and forth with nothing more than the push of a finger on the nub). Sure, it's probably quite futile trying that, but lacking any further knowledge of what that metal was, I figured it was worth a try (to get them to fuse together again; I'm sure the locksmith would probably have had to do something similar to fix it previously, unless he had a tiny portable spot welder in his fan for some reason...) Alas, I didn't know where my soldering iron had gone, given that we had a series of extensive renovations between the quakes, where most things in the house ended up needing to be moved out the the garage or shuffled around at some point (my year 13 graduating yearbook also seems to have gone walkabout at the same time :/

But, me - the newly exam-free and soon to graduate with a postgrad degree in Computer Science dude - though: "Stuff this! Lemme have some fun hacking this thing into submission!"

So, it came to be that I decided to replace that broken v-clip (and a lot of it's associated gunk) with a functional equivalent: a spring! Unfortunately, it was too long ago to remember where exactly I placed it... What I do remember is that I wedged the metal lever thing (which touches the nub, holding it in place) between the first two coils of the spring (to keep it attached to it). I'm not sure what I did with the other end of the spring though: I either smooshed it up against one of the nuts (but then, how would turning the handle have moved the spring), or I managed to attach the other end to part of those grooves in some way (so that when the handle turned, the space got compressed and the spring got pulled along with it).

In any case, playing with that thing in my hands for a few minutes, I found a position for the spring where it worked! Turning the handle, or pressing the nub... all worked flawlessly. It was time to mount it back in the door and try it... Bam! It worked the first 2 times, but then it suddenly failed, and the nub went in and didn't come back out. Opening it up, I found the cause - the spring had "popped" out of place - possibly due to gravity playing some tricks. (NOTE: In that initial test, the spring was only wedged between the two moving parts; it wasn't solidly attached to either end, so it managed to break free completely).

After taking it down and fixing it a second time to prevent that failure (I can't remember if I ended up sticking anything else in there to take up a bit more space or not... probably not), I mounted it back ni the door, and it worked well for the next few days! Now, during some of my tests, I replaced the spring I was using at some point. Initially, it was from one ballpoint pen (*) that was long busted, but I ended up finding a more robust spring (thicker + stronger/more resistant to pressure, and thus less likely to bend out of shape in the middle and spring out of the gap after a few cycles) that I ended up using.

It is the case of this initial failure which lead me to believe that the spring probably bent and popped out of place after several days of being bashed around, causing the nub to stop working. Thus, if it had indeed broken in that way, and stayed broken for 2-3 years after that, there should really be no reason why it would suddenly start working again! There really isn't any easy way to explain how a spring which popped out of a spot it was forced into, could start behaving again properly...

(Side Note: My maternal grandfather was really good at tinkering - fixing and refreshing - small mechanical things. For example, mum has quite a few mechanical watches, all of which my grandfather put together/could completely retrofit himself. Too bad I never really got to pick his brains or even learn a thing or two about this, as he died from lung cancer when I was only 3 - probably from smoking)

In yet another interesting event this weekend (yes, it was a long weekend here, with Waitangi Day - aka NZ's "national day", though it's often marked by political conflict between a certain clan of Maori activists beginning with H and the government of the day), the old luxo lamp which used to sit on my "proper desk" (i.e. the one I did homework on back as a kid, and which used to house the computer gear I first started to learn to program on) succumbed to old age.

It probably would have "lived" a few years longer, if I didn't try to turn it on (for the first time in ages) while trying to repair the figurehead which fell off one of a model car during regular dusting/tidying up stuff. Alas, it was not meant to be, and within a second me turning it on, the lightbulb blew... so, this lead to me trying to change said lightbulb. But, since it's been quite a few years, it wouldn't budge... I'm not sure if it was a screw type or the plug type, but whichever one it is probably doesn't matter that much when they get stuck solidly like that! It was so solid, that, although I felt movement while twisting the bulb, I soon realised that it was the actual light fitting that was rotating inside the lampshade. At that point, I was ready to give up and let it be, but crack! The plastic swivel-hinge linking the lampshade to the arm snapped off clean. Damn.... I couldn't even just keep it as an ornament!

Sadly, this happened to be my favourite of the set of 3 luxo-like lamps I had, and was also the one that's been around for the longest time (i.e. since I was in primary school!). While the other two had a corrugated-plastic tubing for the flexible part holding the head/lampshade, the one that just broke was the one that had the works: the flexible two-part folding hinge-arm, the heavy base, and that lampshade which starts narrow for about 60% of the length or so and then flares out. Basically, it was similar the general style of the one in the Pixar logo (only, the one I had wasn't really one of the "real" luxo lamps, so it ended up having several joints made out of white plastic)! To this day, these types of traditional Luxo desk lamps are still my favourites. Too bad we don't seem to have any of the official (i.e. "real") Luxo lamps like this here in any of the stores here... having only cheap Chinese knockoffs that have built-in weaknesses due to the crappy plasticky joints and hinges they put on them. Still, I'll keep looking for a new one - a sturdy and well built one this time - to replace it from now on :)
Posted by Aligorith at 2:41 AM