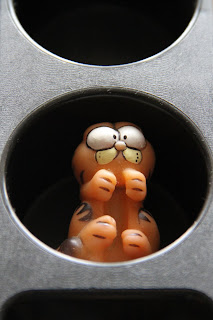 At some point yesterday while taking busily photos around home, I somehow managed to get one of the buttons (it was the "preview/playback" button BTW) on the back of my Canon EOS DSLR partially "trapped". That is, the button looked like part of it had gotten partially wedged under the shell around it, with one side depressed and the other sticking up a bit but only half as much as usual. Try as I might to try and pries it out of its little trap, with gentle nudges along the trapped edges with fingernails and other thin pieces of card, it would not budge. Bugger... not good with Christmas + summer holidays looming...

Fortunately, the button was not wedged so deeply that it had decided to give up yet, so I decided to leave it for a while until I could find a better way (with a clearer mind), or at worst until it did finally pack up. In the past, I've managed to cause serious damage to things after trying to force them back out in situations like this, so it looked like this was going to be another one of those cases.

Move along to this afternoon. While idly gazing at the button, I noticed that it appeared to be slightly twisted in an anticlockwise direction in addition to be wedged. In a "Edison" moment, I decided to try pressing the button while turning it clockwise, while aiming the force towards the trapped edge. Lo and behold, the trapped button was free again! Yay!

I mention this here in the hopes that if anybody every encounters this sort of problem in future, then they may stumble across this post. At least I know that I could've done with advice like this yesterday while doing some Googling on the matter.
Posted by Aligorith at 4:00 PM