Today, I came across the following fish in one of the aquariums I visit from time to time: 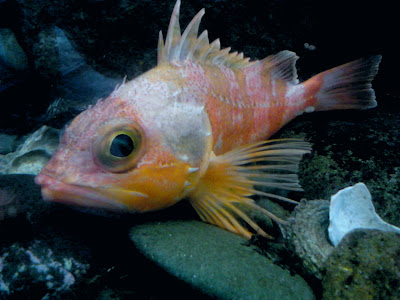 Apologies for the image quality - it was an impromptu shot taken using my ultra-crappy phone's camera (which promptly died a few shots later, just when I had lined up another really nice shot of another new arrival in the tank).

EDIT: Apparently, this is a "Sea Perch"

Other points of note:
- This is the first image I've ever uploaded to Picasa via Linux. As an initial quick test, this has been uploaded using Shotwell (since it was a smaller download than Digikam). To get that working though, I've had to follow the advice in the second post here, since I was encountering a similar problem to the thread starter.
- I'm not sure what type of fish this is. It's got these interesting white spikes on its gill covers, and the rest of its body is actually more of an orange colour. Anyways, what I do know is that it is apparently new to the tank, and was "playing dead" when I saw it (i.e. no moving its fins, gills, mouth, or eyes - though it did started to "relax" a bit after I'd been staring at it for a good 5-10 minutes... hehe XD). Also, chances are, it's a NZ native fish...
Posted by Aligorith at 12:22 AM