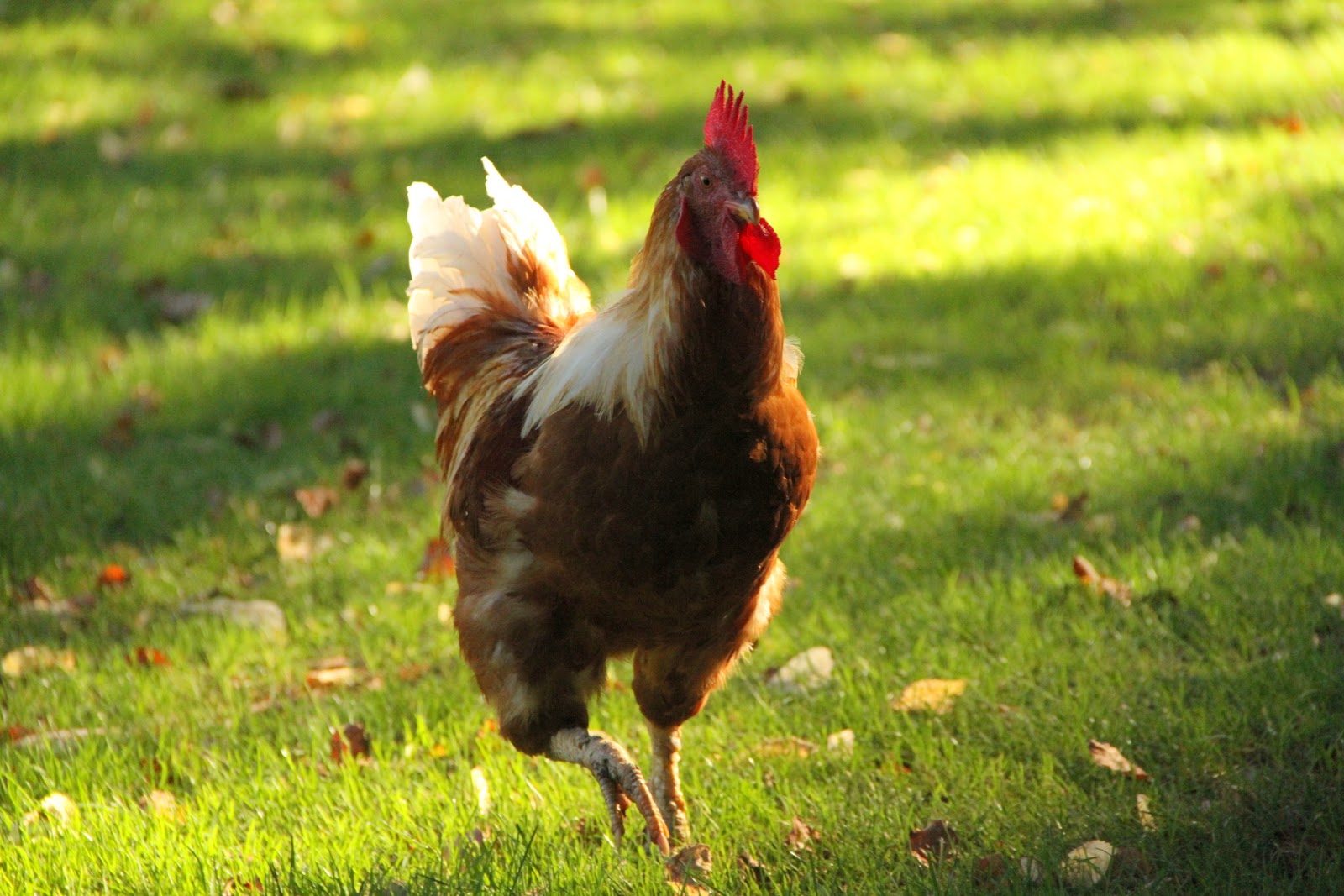 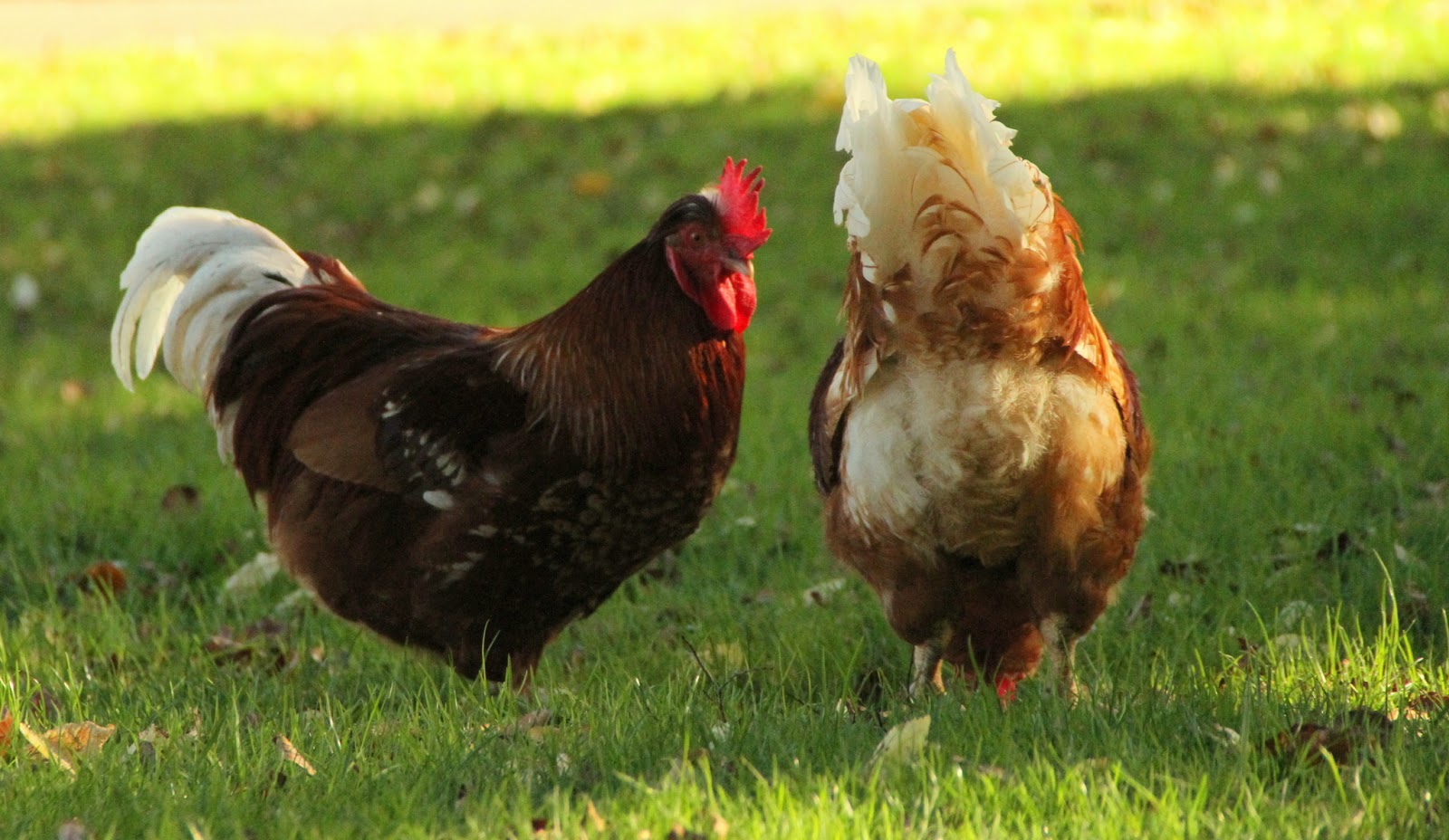 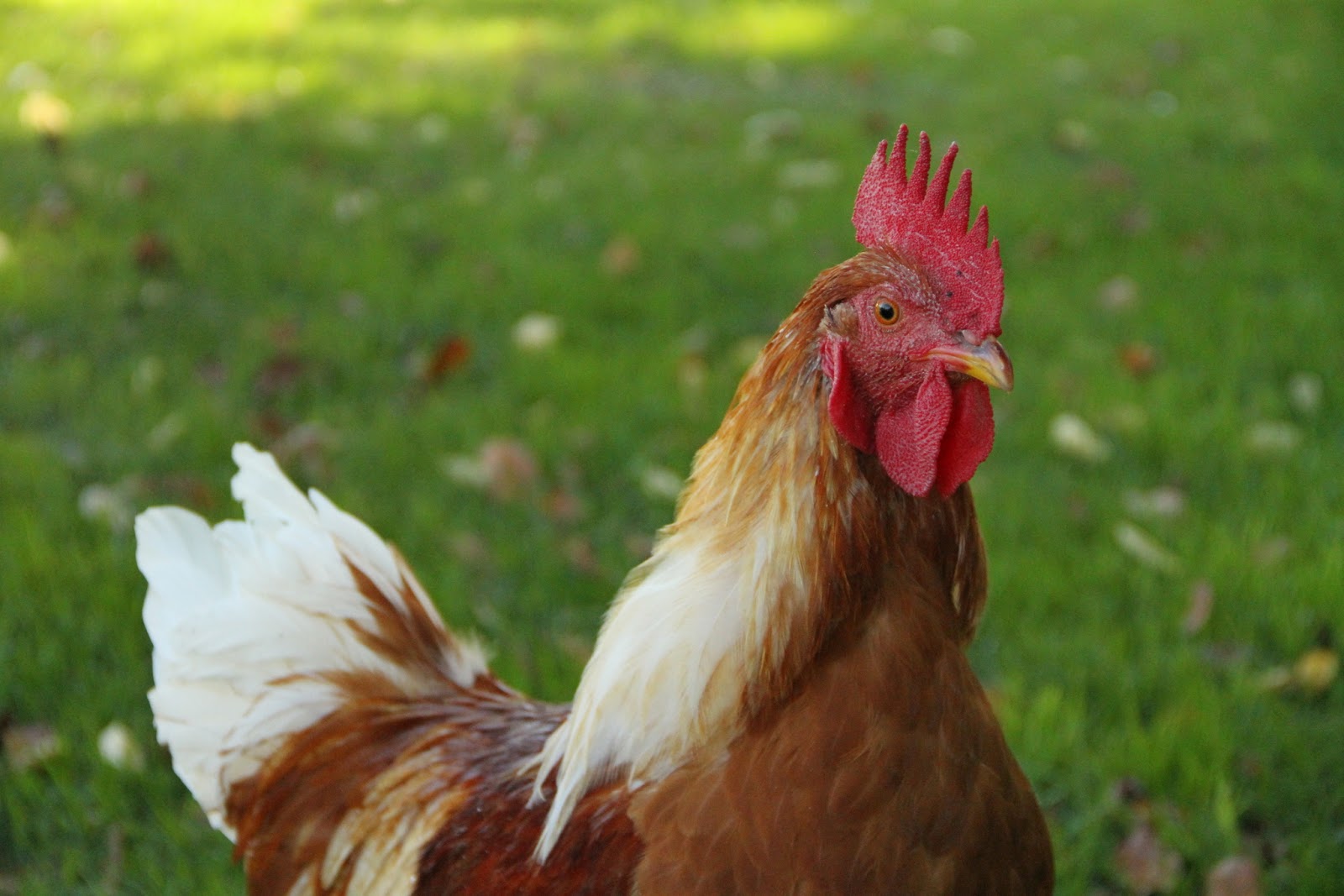 
While this is only really the second time that I've actually seen live roosters up close (following my previous encounter last year, and incidentally also on a day when I was annoyingly running low on storage on my camera!), this time I actually managed to get right up close to them, looking them eye to eye (or eye to lens). This is fun!

Initially, they were very friendly, curiously rushing forwards towards me as I crouched down to get some good shots of them...

One of the two roosters running towards me, snapped here mid- "funky chicken leg-liftting walk step". It's always quite funny watching how they walk, with the way they lift their legs up + forwards (with the claws draped downwards), and then plant their foot down nearly vertically.

Heck, they even had the star-power to stare straight at the camera, and start pulling off a few fancy poses like the one below (pity though that I ended up deleting a previous shot which was even better than the one I ended up getting). At this point, they were almost close enough to touch (but just barely out of arms reach; otherwise, barring fears of getting "bird flu", I would've been curious to find out what exactly those red floppy bits around its head felt like, given the comical way they wobble every time they move their heads):

Buugghhhaart! Where are my goodies? Huh? Huh?

But alas, it seems that they were just checking me out to see if I'd brought any goodies with me... When the goodies weren't forthcoming, they turned on me with a loud flap - a flurry of feathers mere inches from my face, and landing about 1.5 meters away in the opposite direction, tail plumage pointing defiantly sky high...

Bah! No goodies?! Speak to the tail! 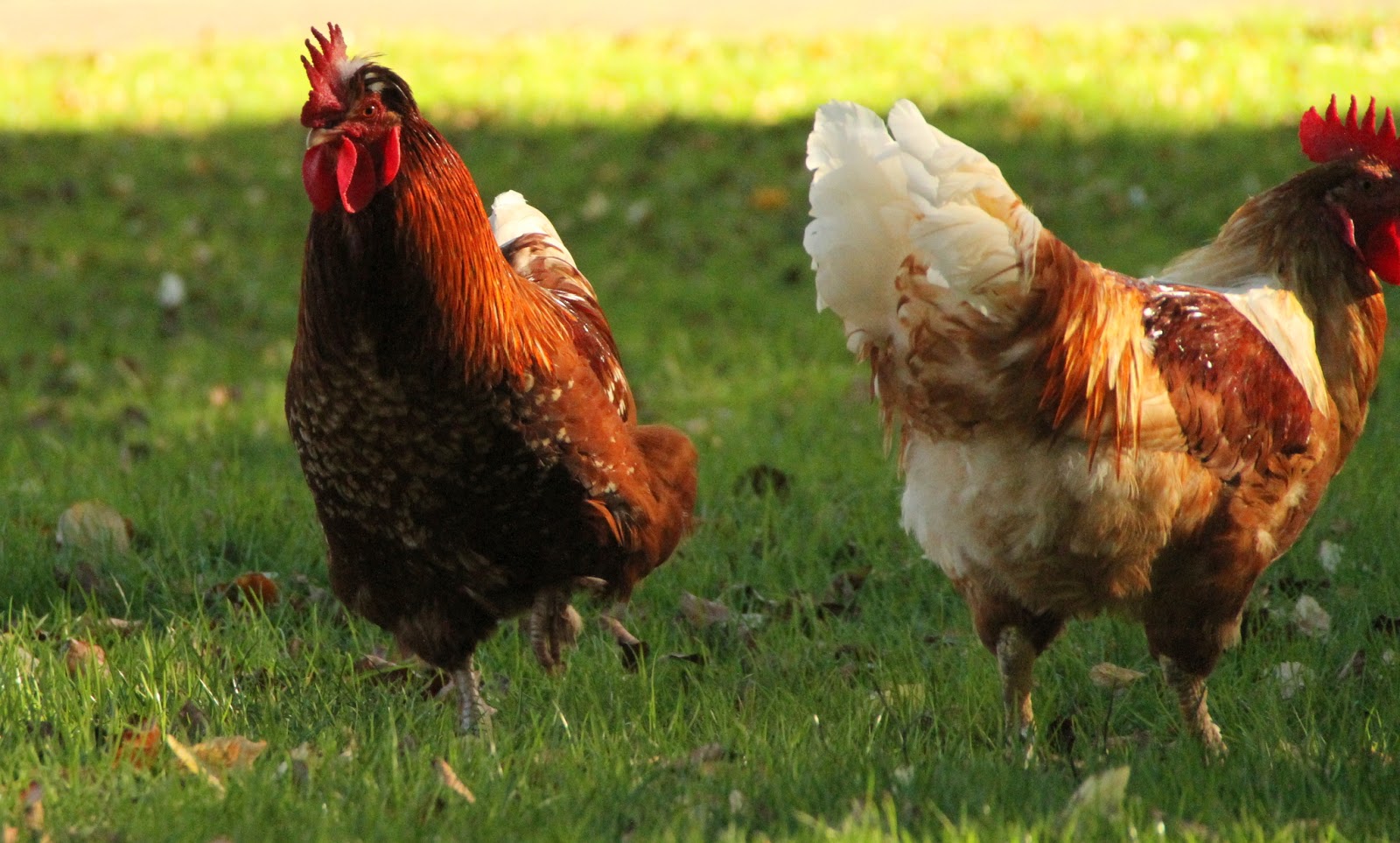 I'm still not paying attention to you!


I spent the next 5-10 minutes basically crouching near the ground, stalking them from light to shade and back again... The strong sunlight at the time made things a bit challenging, especially when the birds would be in the shade, but the background would be in full direct sunlight, not to mention the chickens being slightly backlit while having dark bodies with white + red bits (which easily blow out/clip). 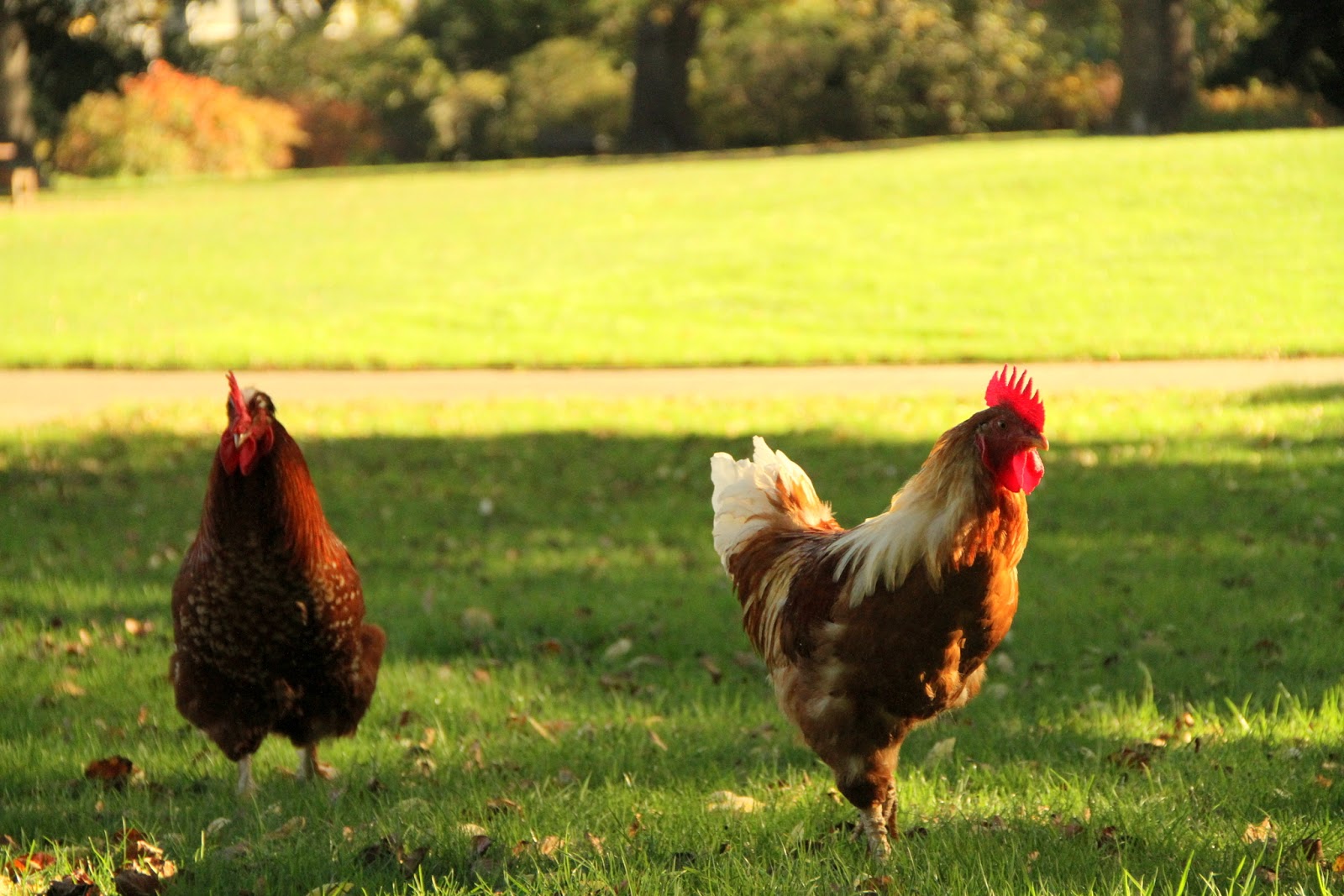 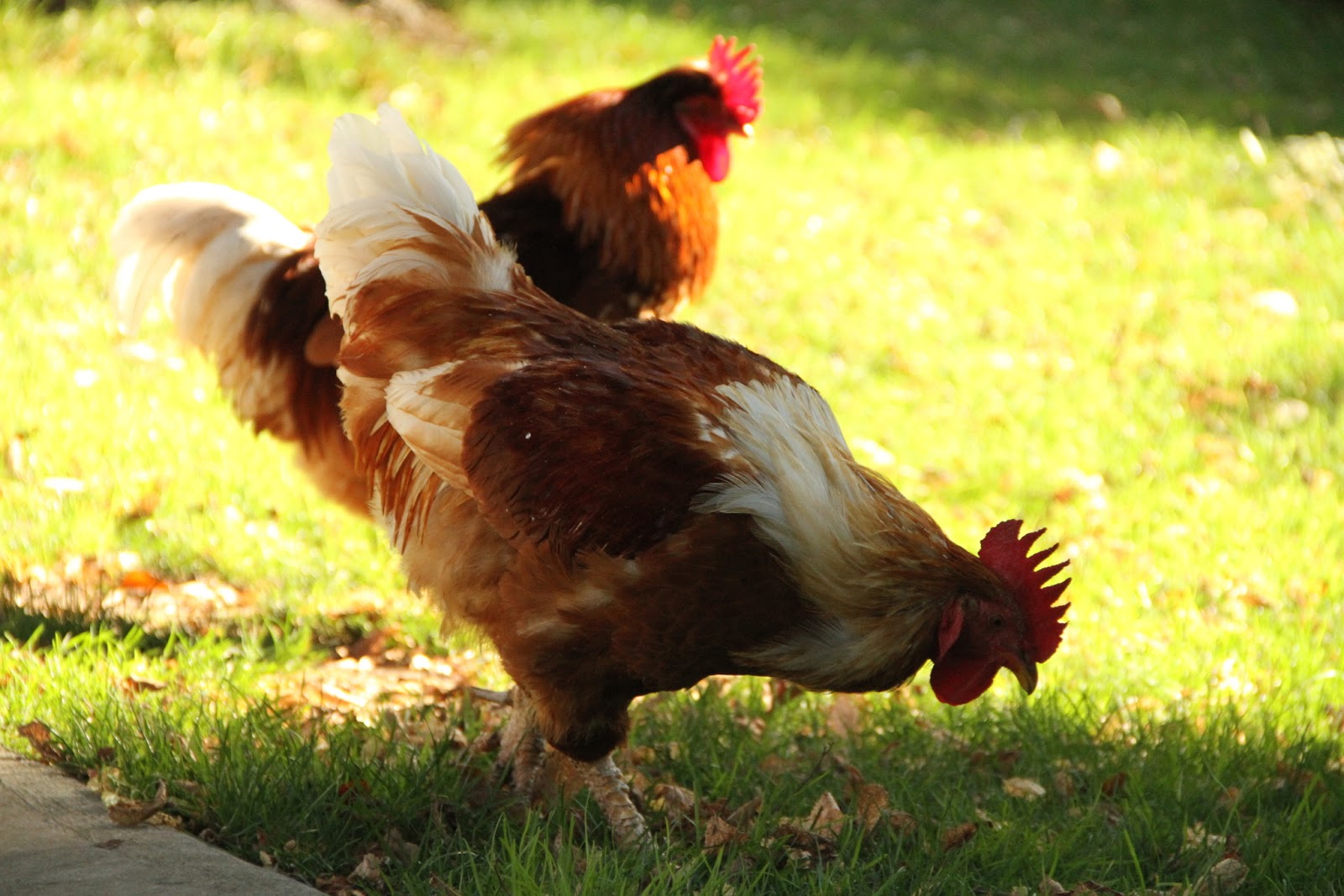 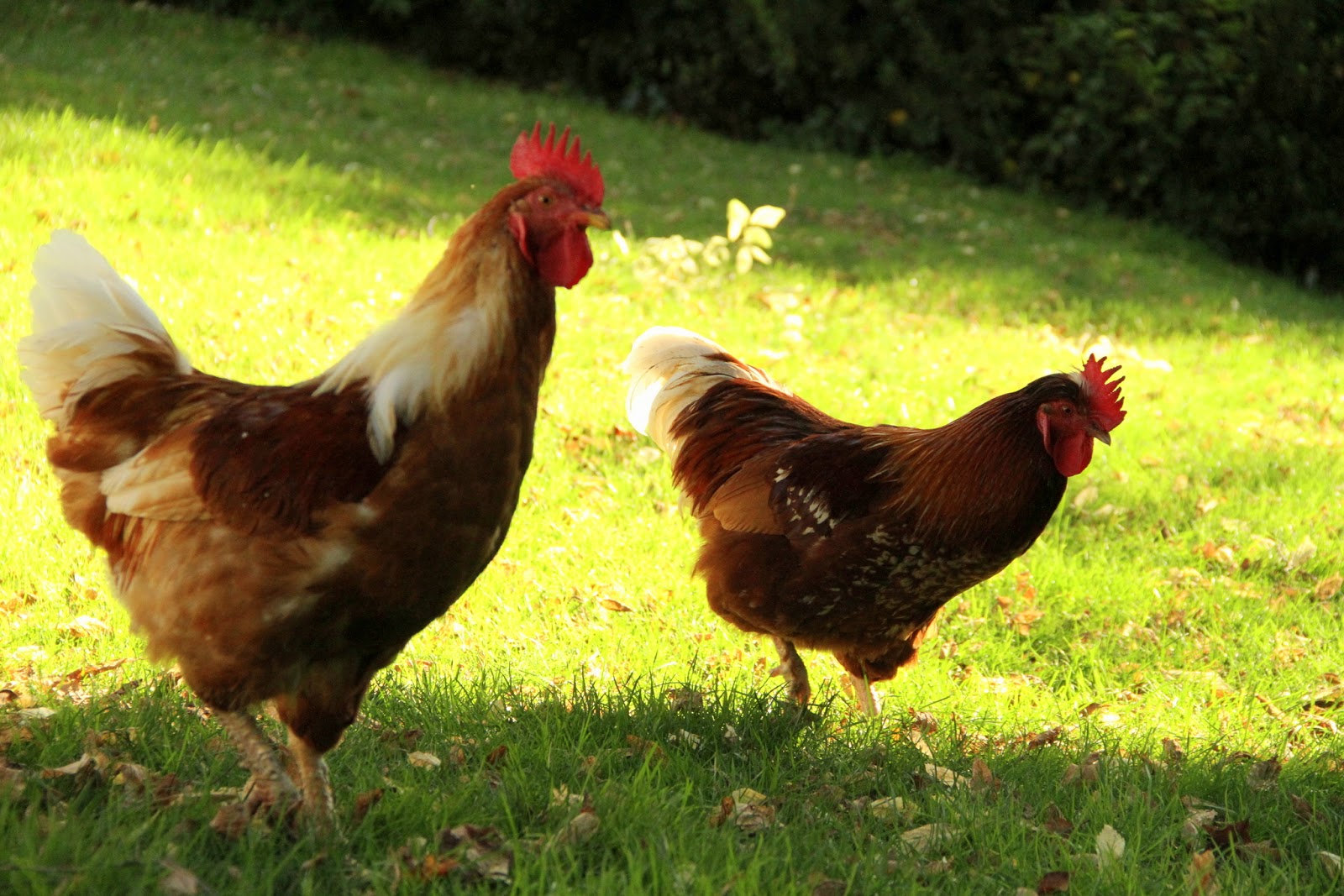 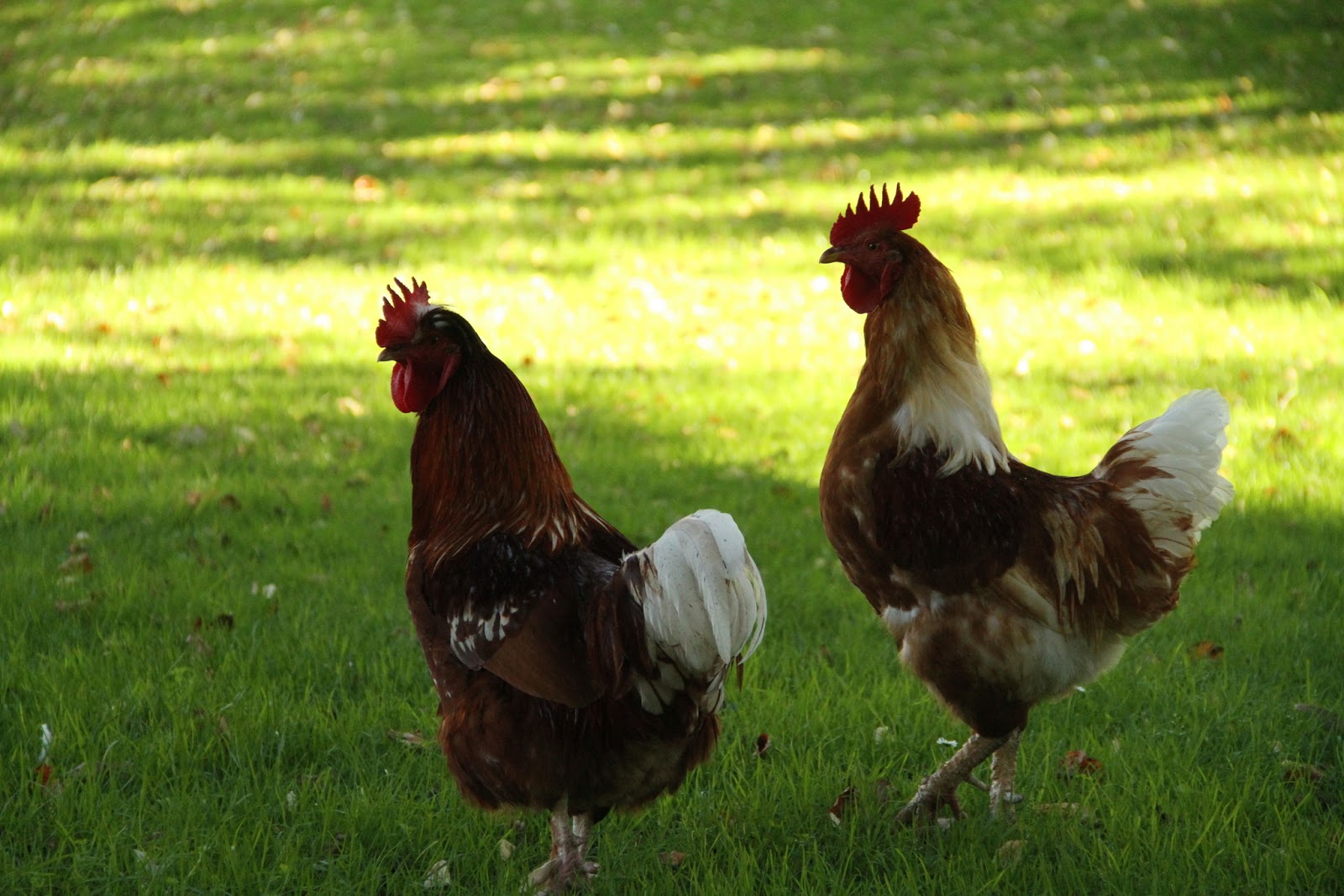 Here we see the rest of the park setting that they were walking around in (which is perhaps familiar to regular followers of this blog, as I've posted photos of this part many times in the past; I spent quite a bit of time wandering around here when I first started getting into photography during my second year at uni -- a few times when I was supposed to be in lectures though XD) 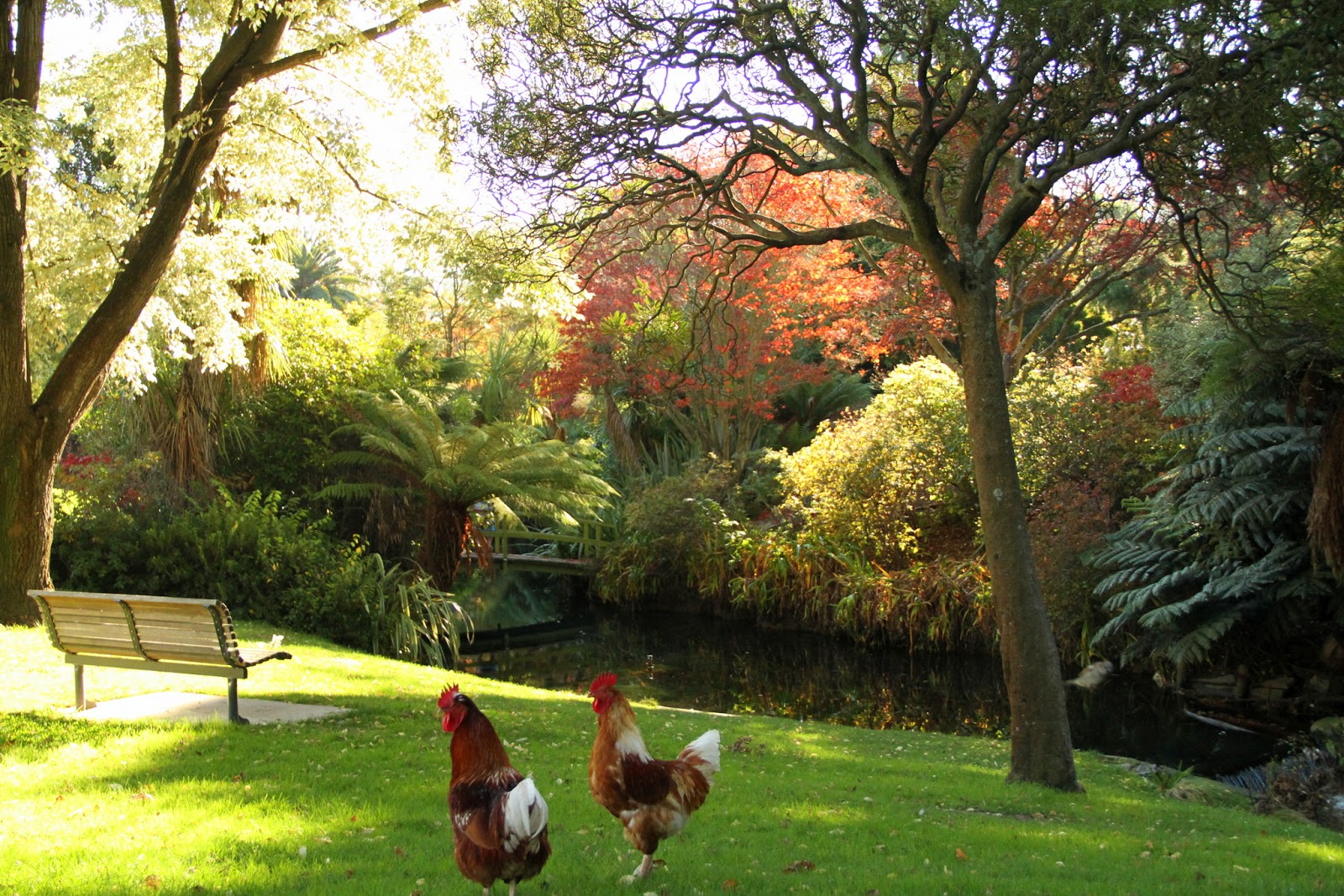 As with the other time I've seen some live roosters, I'm not sure how they ended up here. Having said that, it's very likely that they were introduced by the manager/caretaker of the club buildings and grounds, maybe as a replacement for the pair of ducks that have been MIA for a few years now (i.e. ever since the now completed remediation work on the quake-damaged villa began). Regardless, it was quite a treat seeing them strutting around, pecking, scratching, drinking from the river, and wandering around some more. 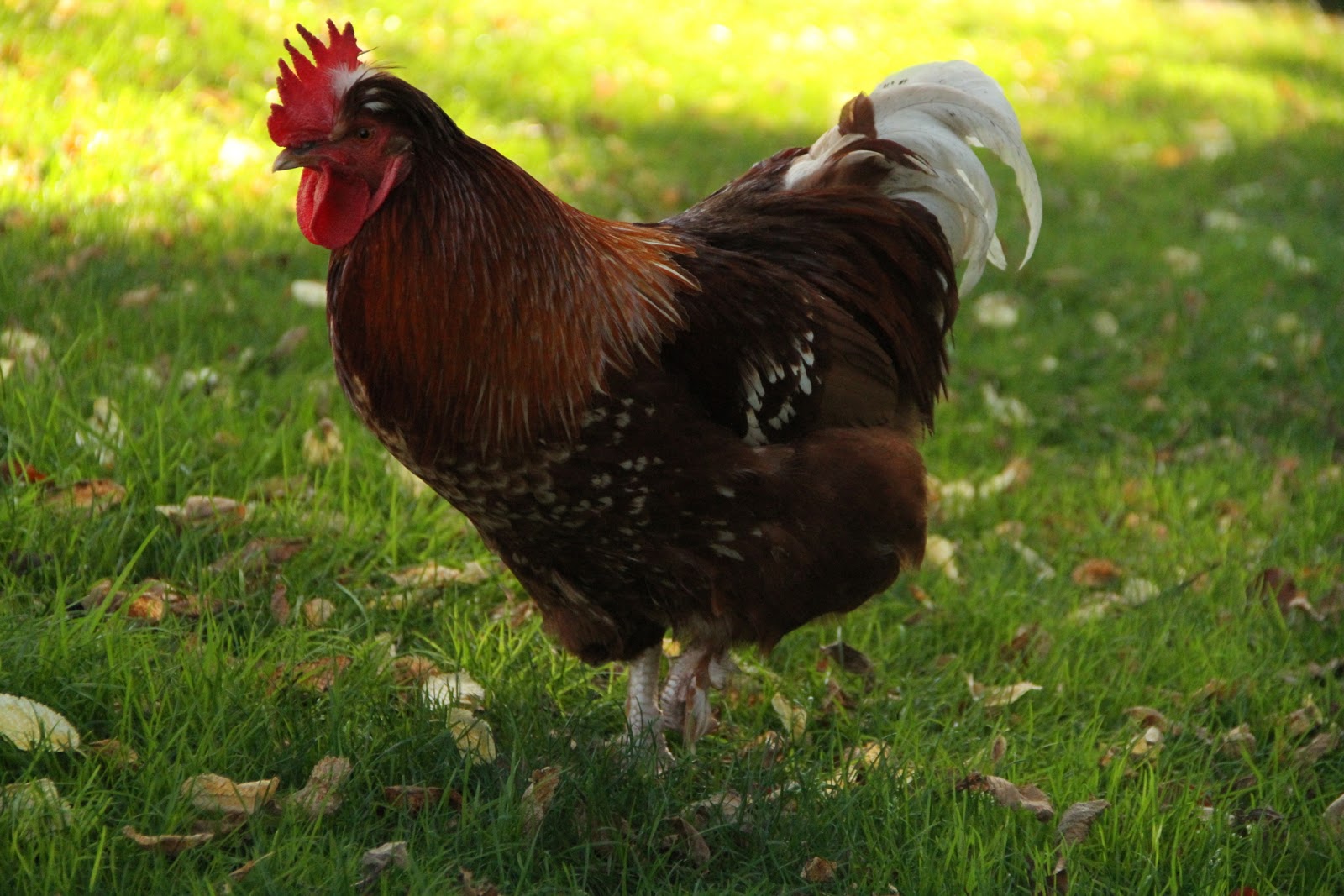 Brownie - The darker and tamer of the two 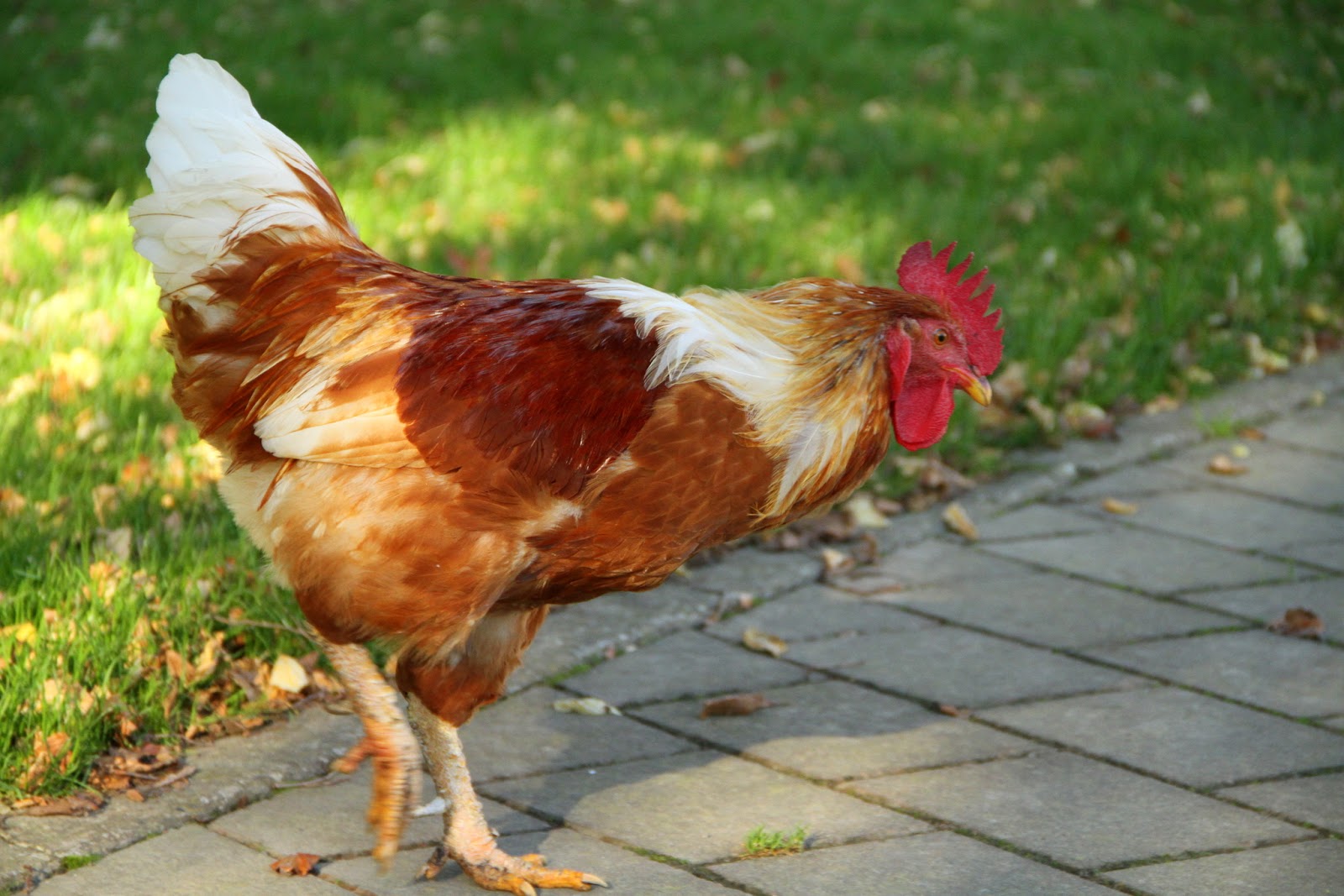 Fluffy Tail - The more inquisitive/aggressive of the two
Posted by Aligorith at 1:44 AM