Sometimes, nature can be quite savage and cruel, reminding us all just how fragile life really is. Just over an hour ago, I watched in horror as a silvereye fell out of the tree and onto the cold hard concrete less than a metre away from where I stood. Out of nowhere, there was a rustling of leaves overhead, and then all of a sudden, there was a chaotic ball green-grey wings and feathers flailing around on the ground, frantically tossing and turning (in what I presume was shock) before rolling onto its back, legs twitching, and taking its last gasps of air. 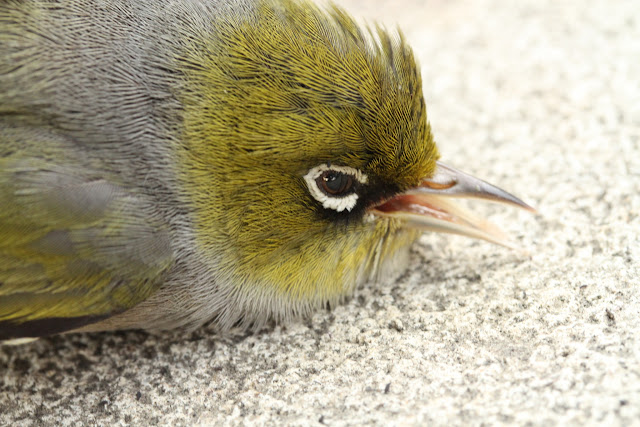 It all happened so quickly that there was little (if anything) that could've been done to have saved it. Would it have helped if I'd noticed it a fraction of a second earlier and tried to catch it, instead of letting it hit the ground? Probably not - since I would probably have still missed it, and it doesn't take into account whether some other factors lead to it falling out of the tree in the first place. All that we can say is that it's life was snuffed out quite quickly after it hit the ground (so it didn't really have to suffer for too long after sustaining any injuries in the fall before it died), and that it didn't die a lonely death. 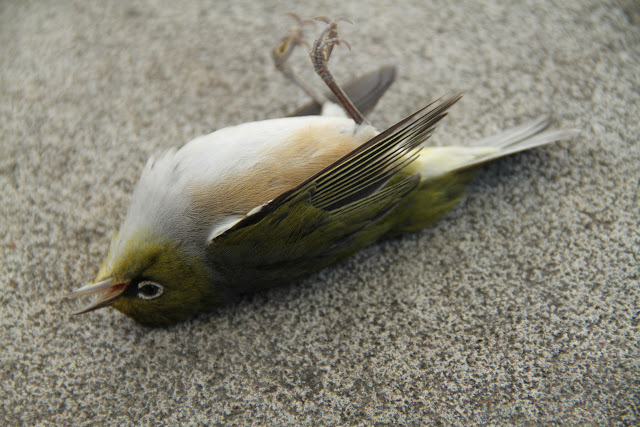 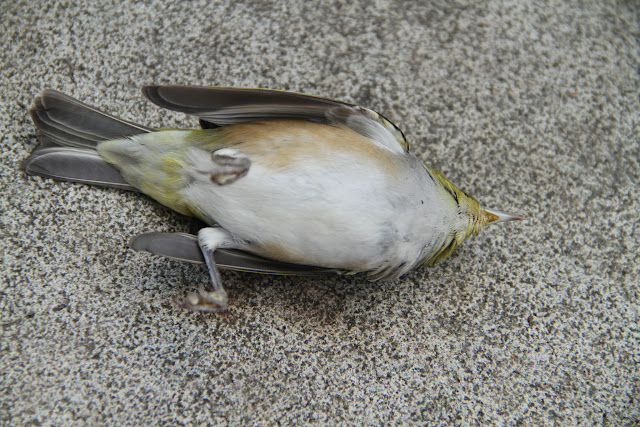 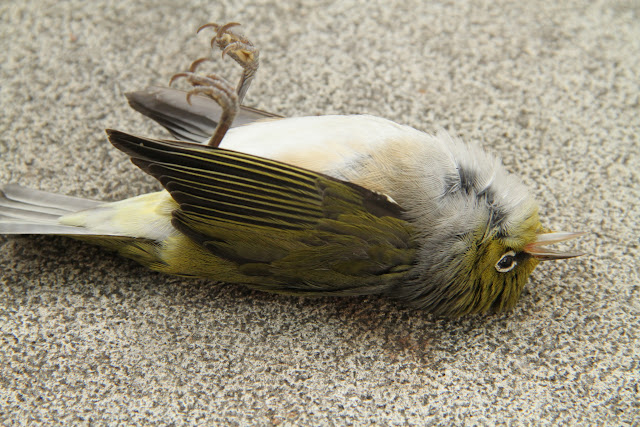 What a shame. Such a beautiful ball of fluff lying lifeless on the ground.

It died with its beak open and eyes wide open, and claws clasped together in the air. Other times I've come across dead silvereyes on pavements around campus, they'd had their eyes closed shut, and legs pulled in close to their bodes - perhaps those ones died of the cold in their sleep...

While I'm quite sad that this silvereye died, I'm also quite happy to have had a chance to finally be able to inspect one up close. Ideally, I'd have loved to actually be able to hold one that was still alive - for years I've wanted to give a their feathers a good stroke, and to try hand feeding one a choice selection of fresh fruit. Nevertheless, I'll settle with having had the chance to take some close up shots of one, and having tried picking one up (they're so incredibly light that you can barely feed their weight, yet their body still feels quite firm and solid to the touch!), albeit with garden gloves this time (just in case it had any diseases). It's also interesting how I happened to be in the right place at the right time  - if I hadn't been out in the garden enjoying the nice weather and sweeping away the dried berries on the driveway (in preparation for some forecasted snowfall later tonight), I wouldn't have witnessed this taking place, and probably wouldn't have gotten to see this bird in this condition (i.e. while taking these shots, I heard one of the neighbourhood cats roaming around outside the fence)

Here are some nice closeups of it's feathers. Surprisingly, it appears that their base colour is actually grey, with the distinctive green bits being highlights/tints applied to the tips of those feathers. It's also interesting seeing all the individual strands of their feathers, which give them their distinctive fine texture. 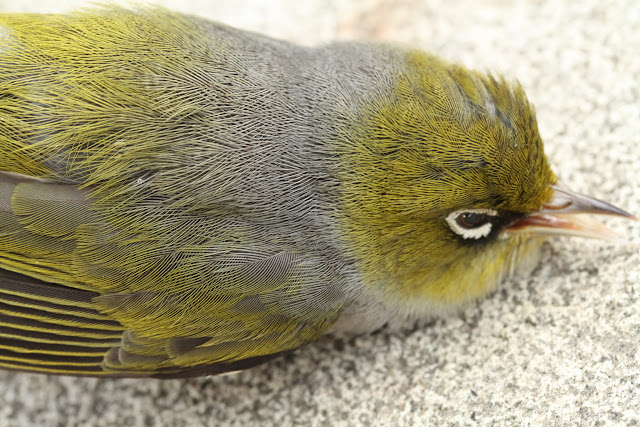 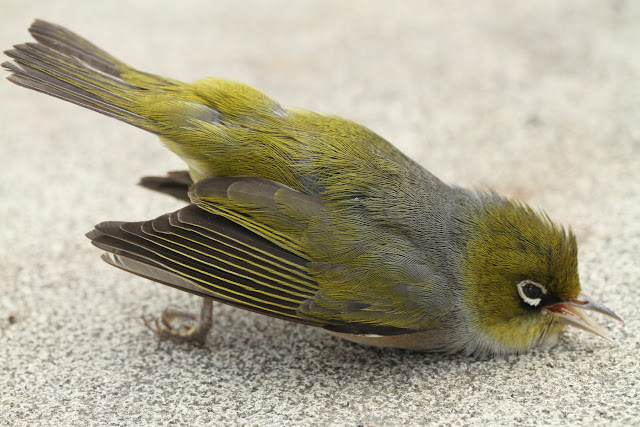 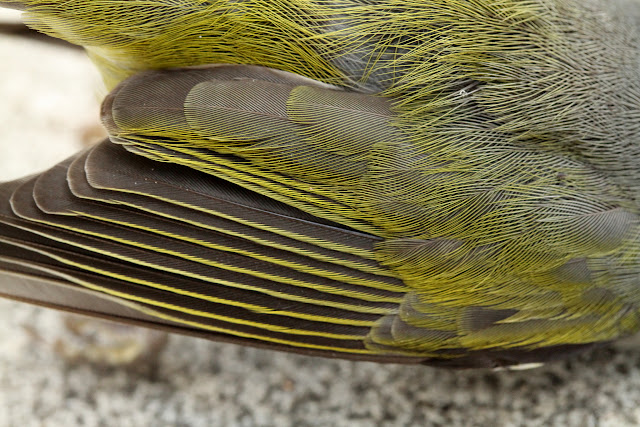 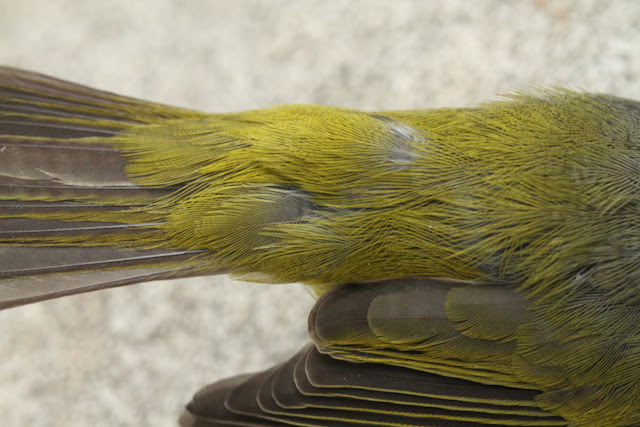 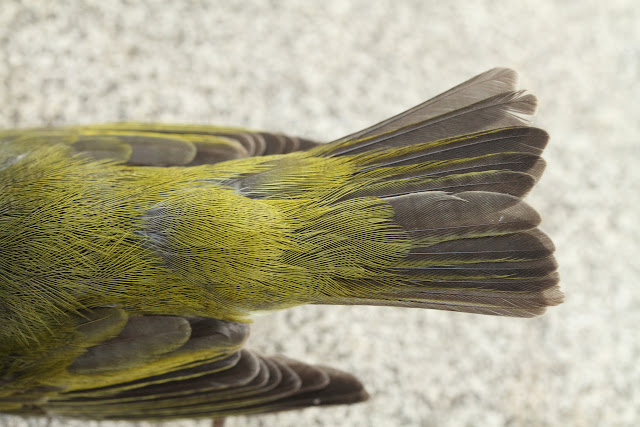 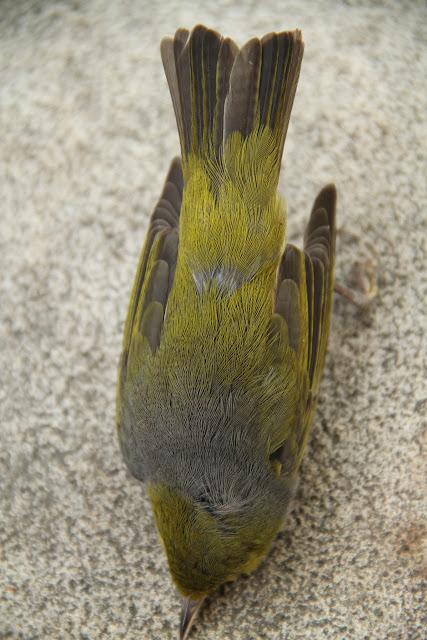 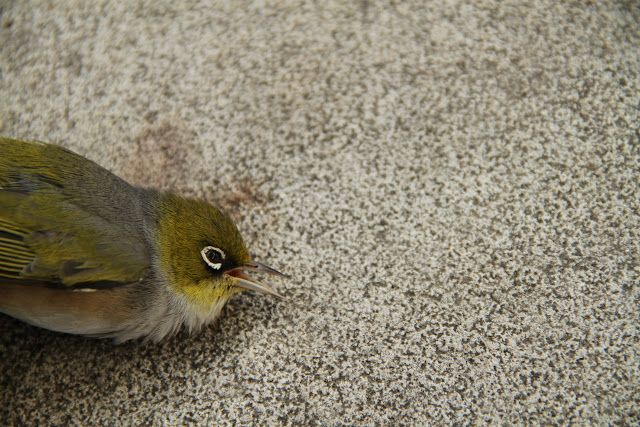 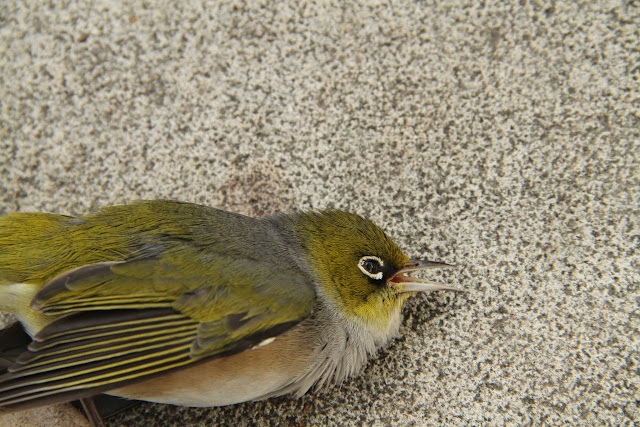 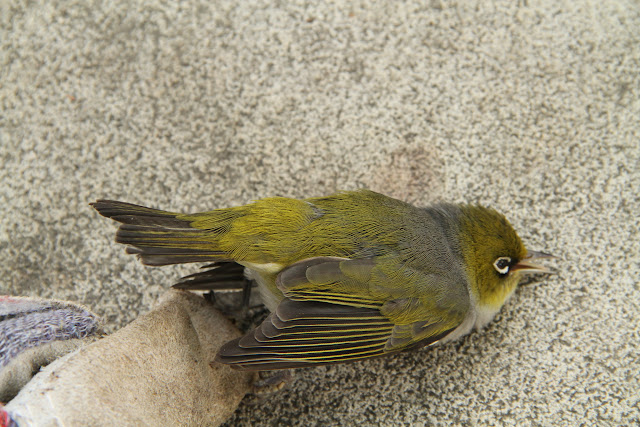 Posted by Aligorith at 4:08 PM