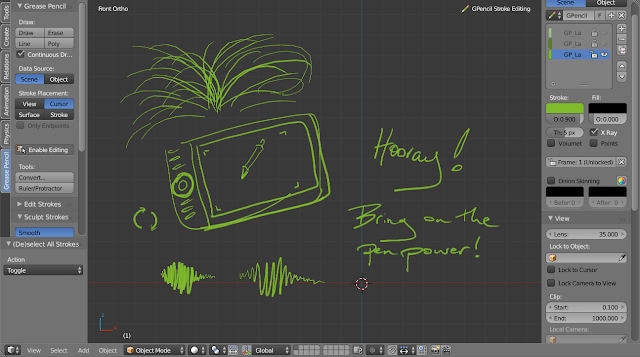 
* Considering that quite a few of the dev projects I've had in mind for a while and/or have been working on for a while, this latest addition to my computing setup is long overdue.
The crappy generic tablet (4:3 aspect ratio, no pressure, ancient) that we'd gotten close to a decade ago (and which has largely sat idle, up till a few months ago) just wasn't cutting it any more, though it at least did help me retrain the necessary hand-eye coordination needed to go from using a mouse to using a tablet.

(On a side note: After trying the pressure support with the current way that pressure gets used for the GPencil Stroke Sculpting, I have to say that it feels sorely lacking IMO. So that's on thing that will be rectified... as will making those volumetric strokes easier to actually use when you need them)

* These buttons are awesome
I know I'm only starting to scratch the surface of what these buttons can do. After all, they're all still only on their default mappings (both in the driver, and also in Krita, Blender, etc.) So there's obviously still a lot of interesting stuff that can be explored here :D

That wheel thing in particular presents many interesting possibilities... hehehe

* Pressure Sensitivity
I never thought I'd say it, but I'm a bit surprised how hard you have to press for some of the higher pressure levels! This is from someone with a naturally heavy stroke ;) It's most definitely something I'll probably eventually play with configuring in future...

* Packaging and Unboxing
Wow... that is some slick packaging they've got there, with some nice touches! I'll admit though that initially, seeing the size of the box was a bit surprising (as in... gee, that looks a whole lot bigger than I was expecting... I hope it fits on the desk) ;)

* Cables/Wireless Kit
This tablet comes with the "wireless kit" stuff included in the package, allowing you to use it without having it physically tethered to the machine. So far I haven't bothered setting that up yet tonight - mostly since I just wanted to try and see how it works with the cable attached; besides, the battery wasn't charged yet, so I probably wouldn't be able to go wireless immediately anyway.

Given the way the cable flows (it plugs into the RHS of the tablet, and the needs to squiggle its way across the desk above the keyboard to reach the free USB ports), it looks like using this wireless may become an attractive option (though with 4 hr charging times, that may not be quite so practical at times). One slightly annoying thing with the cable is that the tablet-end needs a bit of an extra nudge to actually get it to be "actually in". I've given myself a bit of a scare twice already when plugging it in, only to not see anything happening... turns out the plug wasn't actually pushed in far enough! Doh!

* Pen vs Mouse
Using this tablet, I can definitely see the appeal of why some Blender artists I've spoken to have done away with a mouse. Personally, I think I'll probably still stick to using mice for most tasks. But, we'll see... :)

Posted by Aligorith at 1:51 AM