This afternoon, I had some lovely visitors... 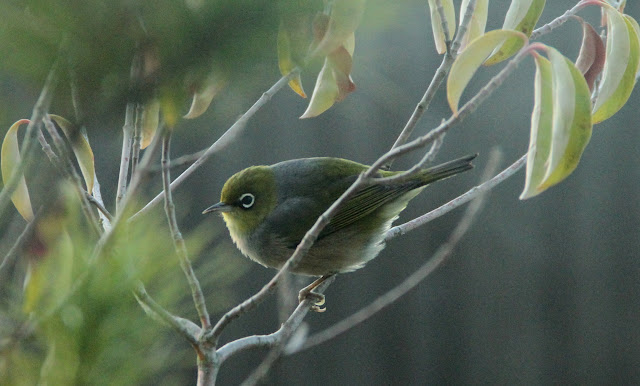 Aww... Isn't that one cute plump silvereye :)   Given that it's mid-winter here, with temperatures in the single digits (and often feeling a lot chillier) in the late afternoons, it's no wonder that they need to fluff up quite a bit to keep warm!


The harsh climate at the moment does make finding food difficult. Just earlier this week, we woke to find yet another silvereye had succumbed to the "elements" overnight (though we suspect it was more like "an encounter of the furry kind", as its feathers were all ruffled and pineconed, and left in the middle of nowhere). 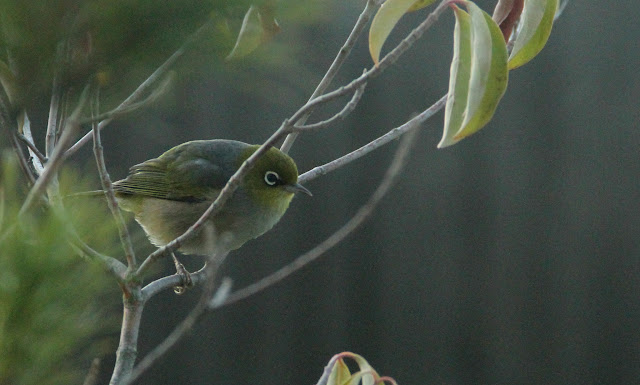 With increasing urbanisation and a chillier than usual winter this year, we've been leaving out bread for the little guys more often this year - say, several times a week (usually the weekends, but maybe also once in the middle of the week) when it's fine.  (Oh, and a few months back while it was still warm, the neighbouring kids had a bit of a phase where they were biffing their uneaten ham + mayo sandwiches over the fence every few days; although I've got my doubts about whether it's bad for the birds to be eating that stuff, I've seen them voraciously devour two of those sandwiches in minutes, even when the whole thing was perfectly wrapped in clingfilm! Take that, anyone who dares to use "bird brained" as an insult again!)

I've been considering setting up a nectar feeder specifically for the silvereyes in addition to just providing them with bread, to give them some more "species appropriate" food. That said, they didn't seem to pay much attention to the water or orange halves I've left out for the in the past (though in warmer months) - and supposedly both of those are things they are supposed to be interested in. Then again, they must be really hungry at this time of the year, as they're usually the first to arrive these days when I put bread out, and always stay around for quite a while - all 3-5ish of them - taking eagerly tearing out lump after lump of bread, mouthful by mouthful, even in the presence of the big black bullies like starlings and blackbirds. 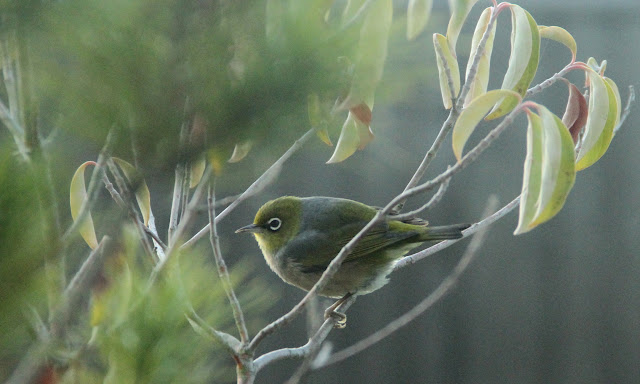 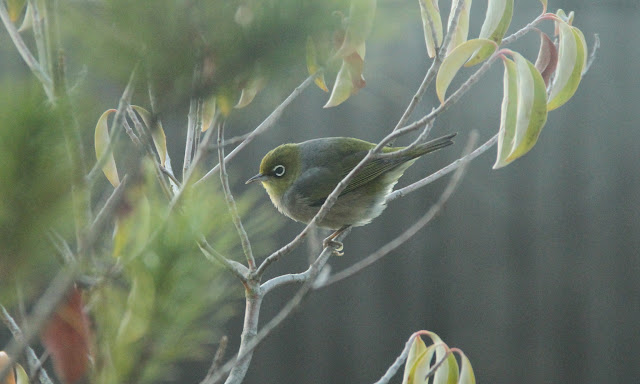 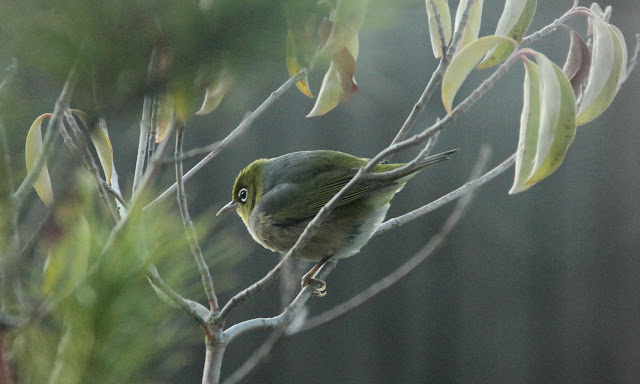 Perhaps as signs of gratitude of sorts, the birds have taken to "returning" the favour in various ways that have become familiar in recent weeks. On warm days (and especially if they're fed around noon), the garden will be filled with a lovely chorus of loud and excited chirping for 30-60 minutes after the bread has been finished.

However, the silvereyes in particular have one other habit that I'm very fond of: at least one of the flock will come up to the trees by my window, and sit for a while. It's as if they know... that the "hand that feeds" watches from that window, and if we go and sit by his window after enjoying our meal, there will be more bread in future... (mwahaahaha.... /end wishful thinking) 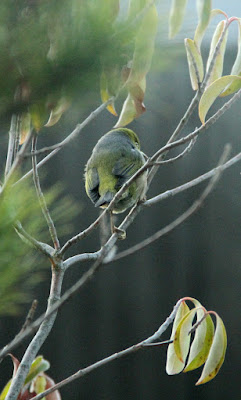 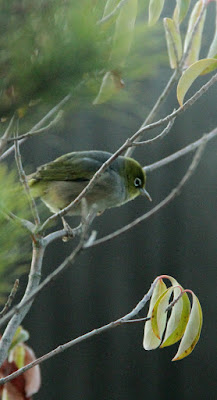 Sometimes, they will then fly off to the camelia, and spend some time sitting in that bush as well... 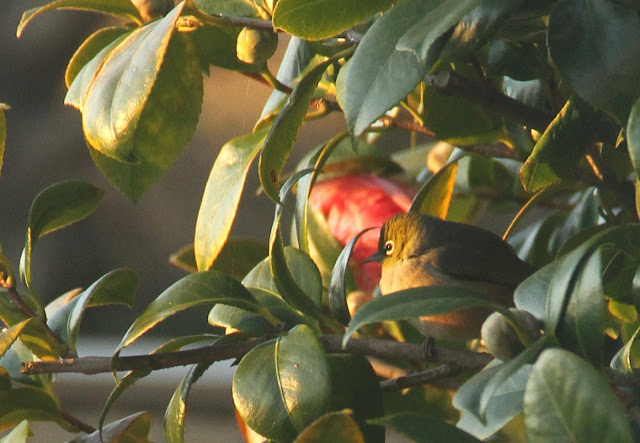 Another plump silvereye, basking in the late afternoon sun 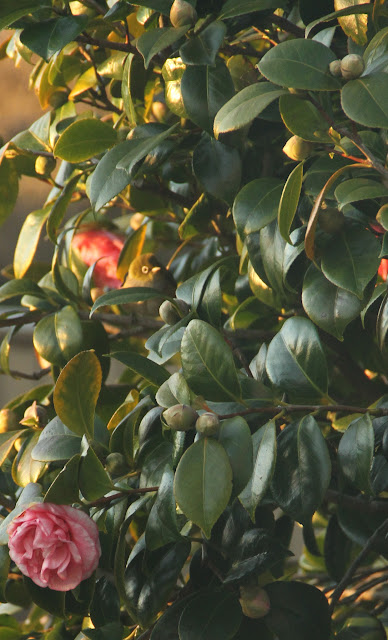 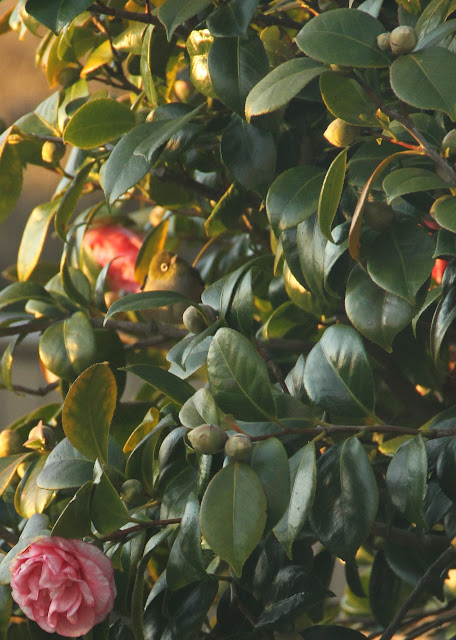 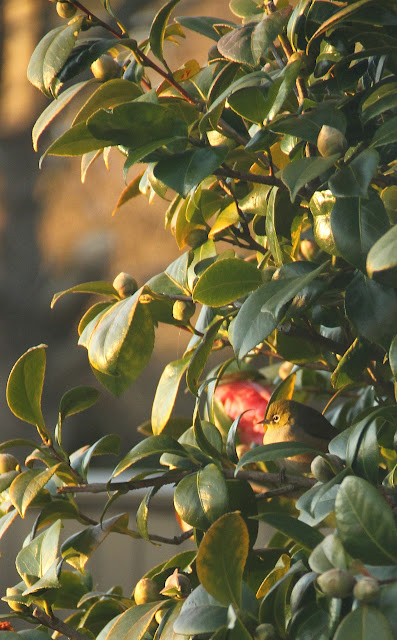 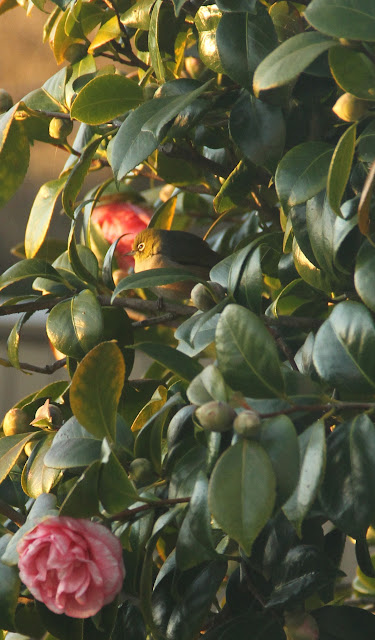 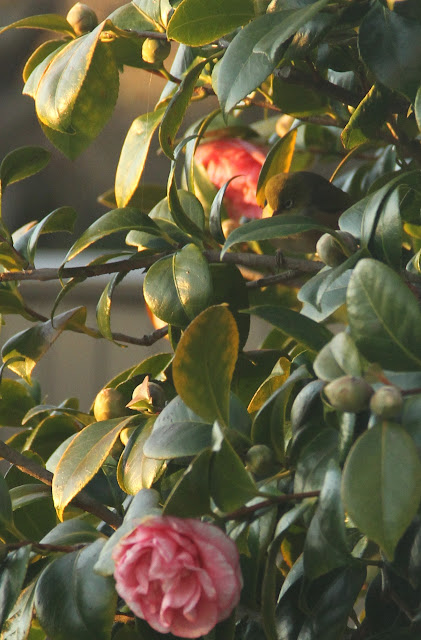