The results are in. My response: Bllleeeeeeeeeeeeegguuuuuuuurrrrgggggggggghhhhh!!!  (*goes off to find a larger bucket to vomit in*) 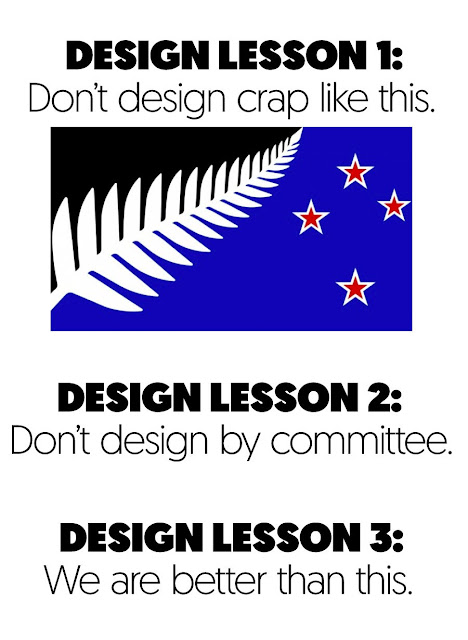 
Can't agree any more about these conclusions... :)


Looks like most "kiwis" who voted for that dog of a hack job are as (colour) blind and tasteless as the hapless nearly-extinct flightless birds they call themselves after....  Behold, the apparent winner of the Pee'em's turf-legacy-marking "flag change" farcical:


"Tacky Hodgepodge of Oversaturated Holey Tarpaulin, Weedmat, and Fishbone-Patterned Duct Tape" - Patched together from some scraps in the yard after a few beers (TM)

forced into the world by Mr "I'm-so-smug-I-can-get-two-photoshopped-copies-of-my-mspaint-doodles-on-the-voting-ballot".

IMO:
1) We do NOT need a flag change
2) This is an awful, ugly eyesore of a flag
3) The flag change process was flawed (and maybe even biased), with issues with: Timing, Process, and Selection of "Alternatives"
4) Democracy can produce bewildering results. In times like this, it does lead me to wonder (if only very fleetingly, in a dark moment) whether the dictatorships in parts of the world are really actually that bad...  Sometimes it seems "the masses" do really need to be protected from their own idiocy

This was the absolute ugliest of the options, and one that should never had mad it into the final set against a doppelganger by the very same backyard designer, but with different coloured stripes. From a field of a lot more varied options (including some "amazing" entries like kiwi's with laser beams coming out of their eyes, and sophisticated geometric patterns), the best they could come up with was a set that included a piece of crap like this times two?!

If a large proportion of the people who end up voting choose crap like this, it's no wonder that the "smiling assassin" and his cronies keeps managing to blindly sleepwalk back into high office again and again and again. This was his "preferred option" after all apparently, so it looks like the flock of sheeple and adoring fanclub have followed the call from the top.

I mean, it's fairly easy to understand why few people would choose the lame/pathetic koru design (there are many much better ones out there that were discarded). But to not reject this one though... that's a bit harder to justify...  I could passingly accept having the "trade and enterprise logo" (aka "qualmark hotels" logo, aka black and white dinner-plates fern), or even the red-and-blue version of this design (which is the prettier of the two, though still has a slightly cheap/gaudy look to it). But not this.

As for "Red Peak" - like many, I initially wasn't a fan of that general class of designs (especially since we only saw those shown in "2d boxes on a page" form, which really doesn't accurately reflect how flags are really seen in practice). However seeing the potential for reuse/reinterpretation of that design, as a canvas on which the public can project (quite literally) their own meanings of what it means to be a New Zealander, as well as that epic promo shot they were using of it does put it in a new light for sure.

A smattering of Red Peak examples - Screenshot of the promo page... See in full size to see the details

Maybe it's a good thing that I've never been a fan of trying to do things for "mass market appeal" :)

Adding to this slowly evolving trainwreck, the following breakdown of how it all apparently went down is bizarre and convoluted to say the least:

Who on earth designed this garbage?!  Oh, that's right... the govt who said that we ought to have a "flag with a silver fern on it" and wrote the laws for doing so. Ah. I C. 'Nuff said ;)
Posted by Aligorith at 11:44 PM