It is with a mixture of surprise and mild horror that I came across a blog post today where the author went and made his own set of 3D printed clear-plastic-teeth-adjusting-things to self medicate his crooked teeth. 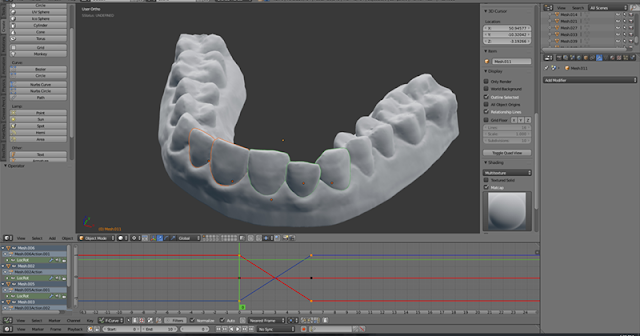 My reaction to this post (and in particular, the screenshot copied above) can be summed up as follows:
* Surprise at the audacity of being a human guinea-pig for doing this DIY (with what appears to be no medical supervision), but also that to create the sequence of 3D printed inserts, he not only used Blender (eek!) for his 3D needs, but used the animation tools in Blender to generate the sequence of progressive steps needed to perform the teeth adjustments (double eek!).

* Mild Horror - It's one thing to work on animation tools for animating fluffy bunnies bouncing around on screen... it's another though to find that these tools were used to generate medical molds (*gulp*)...

So, it's probably prescient that I highlight the following passage from the license, to remind everyone :)

Anyways, it's nevertheless surprising seeing what technology, in the hands of creative and enterprising users can let people get up to!

"All the mischief you've ever wanted, all the mayhem, in one, handy, device!" -- Victor
Posted by Aligorith at 2:27 AM