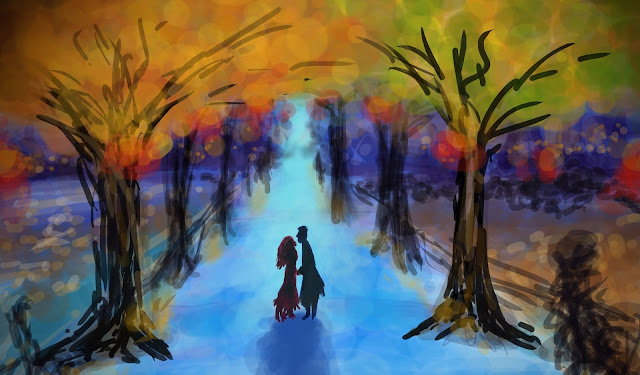 
The longer story/backstory to how this piece came to be is perhaps more interesting...

Today, my system finally unstable enough again that I was forced to restart it. This time, it'd been 34 days (beating my previous record of 31 days set just after Easter) - and for once, it hadn't gone crazy after 14 days (i.e. usually the taskbar starts playing up, with items staying highlighted long after the mouse has gone away), though by the end Firefox was crashing every 2-3 days from graphics driver glitches. I've been keeping it on for long periods since I got my big monitor (and found that it's a pain having to lift the lid to access the blasted power button if I power off or unplug/plug the damned thing)... besides, this way, it will keep all my windows, tabs, etc. all loaded up, which is handy when working on larger writing projects for my research work.

One of the failures that had been a bit more disruptive though was that yet again, some combination of Windows drivers had yet again decided that my camera was "busy", thus refusing to let me access the photos on it. This happened last time I left it on for more than 3 weeks (but less than that it has so far been fine - knocks on wood!). Thus, after rebooting my machine, I was finally able to get a bunch of photos off my camera at last, which let me clear up a bit of space on the memory cards again at last (now that I could be comfortable that I'd downloaded everything already :)

While looking through the images looking for some more crappy ones to clear off, I came across the photos of trees in autumn this year. This year, I'd been doing some experiments to try some new ways of shooting them to best capture the vibrant, colourful, and "fluffy" look that they had.  In previous years, I've been a bit frustrated by how my autumn-leaves photos weren't quite coming out as pretty as I'd wanted; by accident, I discovered that actually they started looking closer to what I wanted if I instead shot them out of focus! Apparently having too much fine detail leads to everything looking too "boring", "desaturated", "crunchy", and basically, "non-magical".

Thus, I started playing around with varying levels of blurriness, stepping from near to infinite focus, experimenting with different combinations of camera-foreground-background separation distances, along with colour/light combinations (i.e. backlit yellow/orange foliage against dark green foliage quite a distance away, along with gaps of golden light from the side of the forest works particularly well). Sticking a circular polariser on your lenses, and then underexposing by 2/3-1 stop also seemed to help in many cases.

It was quite fun playing around with different focus levels. (Unfortunately, what you get in the viewfinder is not always an accurate impression of the exact feel of what you'll ended up getting - in some ways, I like a bit more what I see in the viewfinder! So, you have to set the focus, take a shot, and then see if the results were what you wanted. Or, use live view.) It's quite strange really:  if you go too far, everything just washes out into a murky gray mushy soup, but if you don't go far enough (i.e. it's almost in focus, but not quite), then you hit a kind of "uncanny valley" where people will just look at it and go, "Eww... You're a crappy photographer who couldn't properly focus your camera!"

That's an important thing to point out: there's quite a difference between "blurry" (i.e. "missed focus" or "camera shake") and this "painterly bokeh" style. One of these is the result of accidents - that is, you wanted to get a perfect sharp image that represents things "as they are", but you or the camera goofs up and the shot is ruined. The other is where you want a particular effect (perhaps knowing that "perfectly sharp" either won't be possible or isn't desirable) and so go out of your way to make it so.

I've found that the best way to get the desired effect is to push the focus to the point where it goes to a mushy soup, and then pull back from that 1/3-1 "notches" of focus (i.e. what feels like roughly ~1cm of rotation of the focus ring on the lens I was using for most of this).

Anyway, back to this image.  Originally I wasn't planning on making the image focus on any particular "characters". However, it felt a bit empty to not have something there, so, following on from the example of Afremov's stuff, and put in a couple people. Usually, I might've gone for just crowds of blurry people scattered all around instead. But, considering that today also happens to mark 30 years since my parents moved to NZ so that dad could take up his tenured job at the uni (yay!), I guess it's only fitting in this case :)

Speaking of anniversaries, it's soon coming up to a year that I've had my Wacom Intuos Pro 5 (wow, how time flies!). Recently I feel that I'm finally starting to get the hang of how to use my tablet to draw things in interesting ways. For example, see the following doodle:

An interesting test from a few weeks back, when I was playing around with all of Krita's brushes to figure out which ones were usable/useful for the types of stuff I like doing. This one randomly ended up looking like some kung-fu master doing some awesomeness to a ball of fury, all in moody and blotchy "watery-black ink on paper" style (which matches the thematic material).


Maybe it's from doing all the Grease Pencil testing, and finally getting to grips with both the mapping of the pen to the screen, as well as how to control pen pressure....

Or maybe it's because I've finally learned two important tricks to any kind of digital painting:
1)  "Always use the brushes at reduced strength/opacity - anywhere from 0.2 to 0.7 is usually safe"
2)  "If you want a softer line, in addition to reducing strength/opacity, make the brush larger"

Or perhaps, it's just from finally having a decent tablet that I now keep plugged in, ready to go at any time (without having to muck around with getting it into a good place, connecting it, etc. everytime I want to use it), and which I have been using quite a bit. :)
Posted by Aligorith at 12:52 AM