The Silvereyes Have Landed

After a long wait, the first of the silvereyes have started appearing in my garden at last! 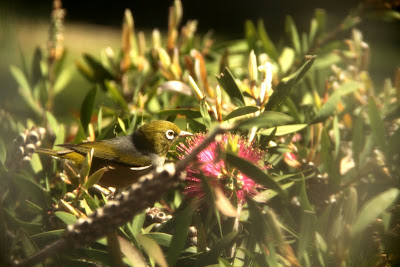 My first shot of the season. IMO it's not the "best" shot that I'm looking for, but it's a nice start.

This was taken through the net curtains, as I didn't quite have enough time to safely set up everything before this one arrived, and I'd managed to scare away another one from a window twice as far away minutes earlier. But next time I'll be more prepared, and hopefully get a much better shot.


Over the past few days, the weather has been flip-flopping between really hot + excessively sunny and rather cold + overcast. From prior experience, I knew that both of these were not conditions that they were not going to show up in such conditions (and also that they "conveniently" - for photography - only show up during the so-called "golden hours").

Also, yesterday, I found a little parasite problem, with some of the flower buds having been hollowed out by what I found to be a black worm-like critter (which was promptly dealt to in "an appropriate manner"), threatened to ruin the display this year. However, with more flowers blooming now, I think that this is not going to be too much of a problem.
Posted by Aligorith at 12:25 PM