This weekend, I've been making use of the relatively fine (though still increasingly chilly) weather and relaxed CBD cordons to "check out former haunts", taking a break from the world of Java and XML... 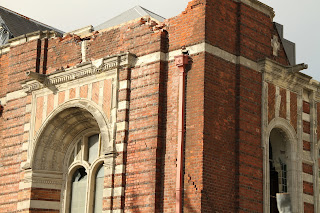 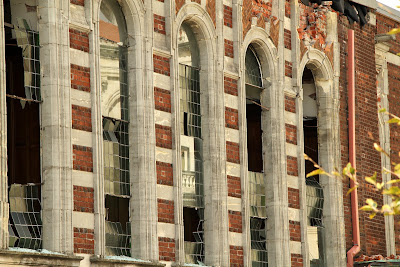 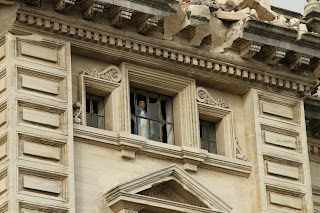 Looking out the window - Cathedral of the Blessed Sacrement (next door)

It was saddening seeing the Music Centre on Barbadoes Street, a place where I've spent a considerable amount of time over the past decade or so. In the first two photos above, you can see the damage to the concert hall, which had until a year or two ago had been known as "The Chapel" due to the building formerly being used as some convent/nun-dwelling place.

The new name for this was the "Maurice Till Concert Hall", in honour of the the late Maurice Till, who died recently on March 26 2011. Mr Till was an internationally acclaimed pianist and accompanist, who was ever the gentleman, dressed in a smart suit and tie. I was fortunate to worked with him twice, with Mr Till acting as my accompanist for my LTCL and FTCL violin performance exams, both of which were held in the damaged auditorium you see above.

I've also had countless memories of this concert hall, from regularly playing there with my piano quartet, A La Vez, who got into the national finals of the National Chamber Music Competition, to winning music competitions, and sitting performance exams there. But seeing it today, in its current battered and bruised form, it's hard to believe that it will see another performance, another round of competitions, another set of memories... *sob*. 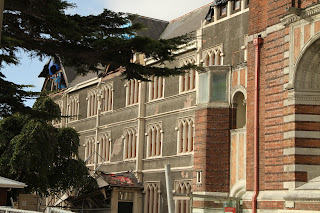 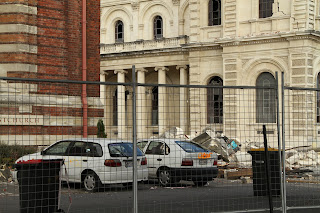 I hate to think what would've happened if this had been exam day several years ago, and I was sitting in the car outside prior to the exam around 1pm, just like the cars above... in the past, nobody in Christchurch would've paid a second thought to that, but now... "new normal"

The Catholic Cathedral beside it, the Cathedral of the Blessed Sacrement, has always been one of the most beautiful buildings in Christchurch. It has always looked so magnificent: a glowing white majestic giant building, with tall, solid-looking pillars holding it up. I remember sitting backstage across the courtyard in the Music Centre listening to it's bells chiming 8-o'clock many times now: if we were offstage, it would mean waiting for another minute or so before going on while the bells continued to chime, while if you were onstage... well, that was... interesting... ;)


The shot I included before the jump is similar to one I saw posted/printed somewhere else, though I found it interesting to take one for myself too. It's quite a strange sight seeing that figurine staring out of a broken window towards the road. Was it always like this? Did someone put it there, facing the road since the September quake? Or was it shaken into position on February 22, becoming clearly visible from the road? 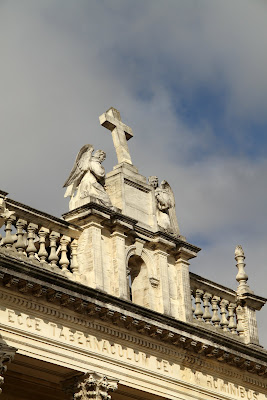 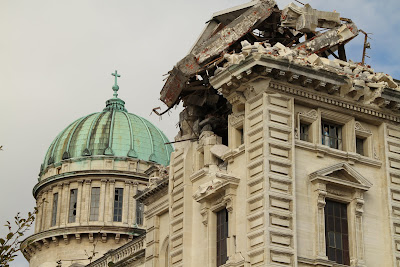 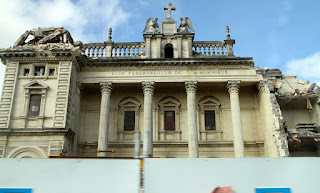 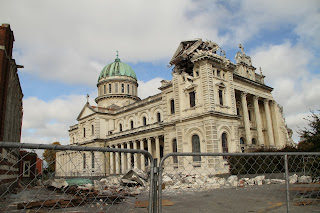 They say that the central dome is severely weakened, and prone to collapse when another significant aftershock strikes. Hence, the fences and shipping containers all around the site, and a crane just out of sight screen-right of the last shot.

But before even getting to this site...
Travelling towards CBD entry points: 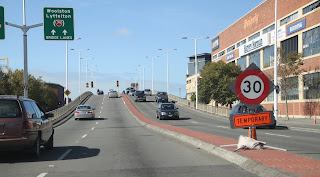 Moorhouse Ave overbridge, which currently needs some extra "help" to stay propped up (on the descending side), as seen in my earlier sets of shots. 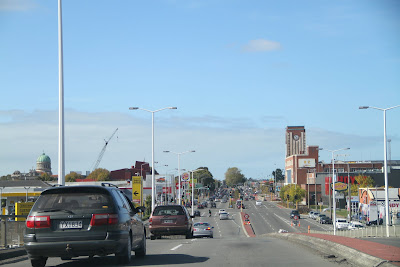 Descending the bridge, you never quite know what to expect these days...
You then have to weave through battered and cordoned off streets: 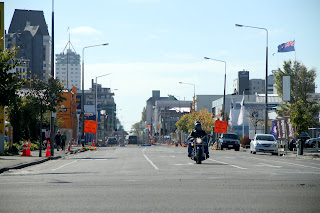 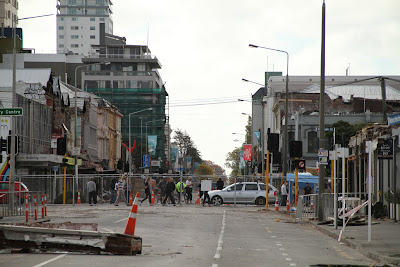 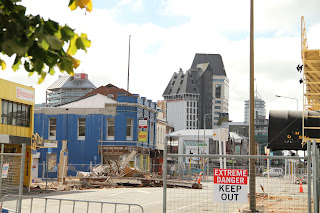 Looking down Manchester Street... (all)
1) Moorhouse Ave end
2) Half-way down, looking at St-Asaph (1 way straight-through)
The signs tell it all. Navigating through the cordoned-off areas is like being in a maze. Either side of you, you may have buildings that are standing and/or fenced off with partial or mortal damage, before suddenly the road narrows to a single lane and/or cuts off abruptly in a "Road Closed" fence. Yet, a several hundred meters away, you might see traffic flowing past in a steady stream (through one of the few functioning roads), and heaps of sightseers trudging along... 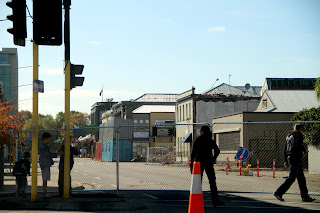 Looking down Madras, from along St-Asaph 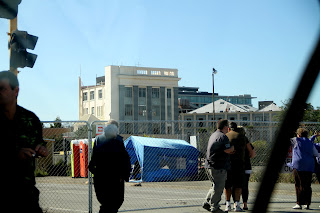 St-Asaph, looking across the old Para Rubber site over to an old post office building (home to the "Alice" video store, which has a vast collection of videos/tapes/dvds/etc.) and High St. On-lookers just stand and hug...
Nearly everybody is here to see the rubble, where things we knew used to be... 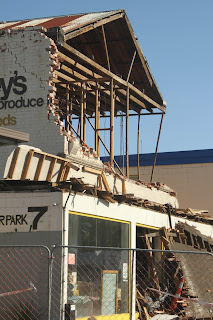 Like this building on Riccarton Road (not in the CBD, but just off the Hagley Park roundabout - incidentally, this roundabout has IMO gotten worse than ever in terms of your chances of getting hit by a car shooting around at random). It crushing a man to death as he sat in his car finishing lunch, having moments earlier moved forward a bit so that a girl had room to park her car behind his trailer.

You don't have to look far to see the scars inflicted by "it"... especially that of the vile, aqueous type... the "big L": liquefaction! 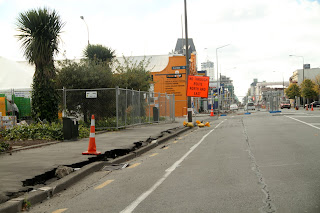 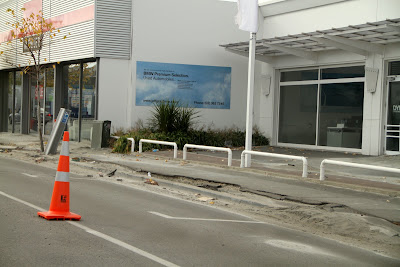 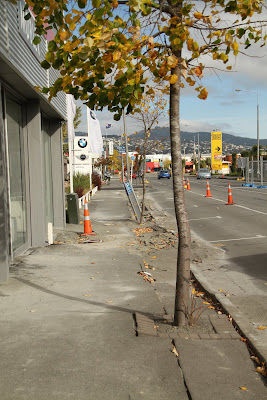 Looking down Manchester Street... (all)
Note how all the pavements have cracked and sunken (i.e. last shot). This is from all the sand that has turned into liquid (in this case, probably from burst water/sewerage mains) and spewed out from under the pavement onto the road, pulling the surface asphalt down and causing a general mess everywhere. While out taking these shots, a little breeze picked up, whipping plumes of this vile crap loose from little mounds on the side of the road into the air, further coating the ground in a fine layer of light-coloured dust. However, don't think that it was just roads that were affected. The furniture shop to the left of the last shot suffered some liquefaction damage to its floor, with mounds of this silt visible in the middle of the floor, just like in some of the shops at South City mall (I included some photos of that place last week, but not of the liquefaction damage to the floors of now empty shops).

Then there are some, like the Science Alive Building (i.e. "Old Railway Station") on Moorhouse Ave: 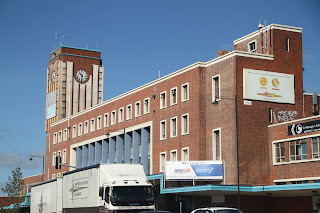 The tower was damaged in the September 4th quake, and had the wooden sleeve put on it to help keep its brick "skin" on. IMO, this actually made it look much better than it used to, since it was always a bit "plain", but this gives it an extra "art-deco vibe". As can be seen, it seems to have done its job, though bits not covered seem to have peeled off... 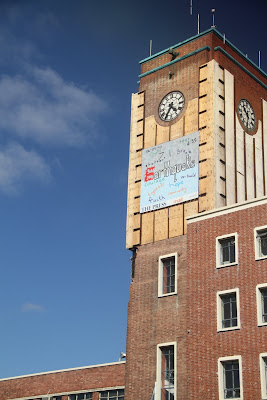 Note that it has stopped several times with each really major shake, with the north face clock still on 4:35 to commemorate the initial event, the western face to 10:30 for the Boxing Day shake, and the rest now showing the 12:51 event.

The fate of this building is currently unknown, with reports frequently varying between "it'll be fine and repaired" to "structural damage... depends on [bean counter] analysis".

Another famous landmark has not fared so well though... 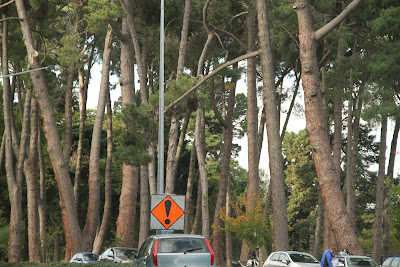 You know it'll be epic when you see a sign in the middle of the road with a big exclamation mark... 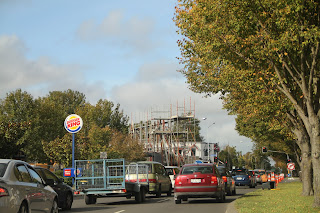 What the... (to the uninformed, this may look like nothing ever happened here...) 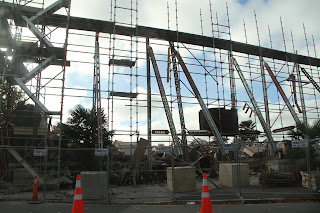 The scaffolding here is the only reminder of what used to be on this site. The old Carlton Hotel (i.e. here) was demolished this morning, after it was deemed to have gotten worse over the past day. It was the backdrop for many news broadcasts, especially from the local media here in the days immediately after...

Meanwhile, across the road, the army is still keeping up its maintenance of the cordon, having even built themselves a little wooden shack now: 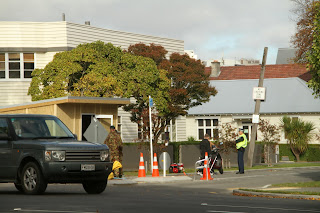 "Civilians" meanwhile queue near the hospital at the "temporary bus exchange" (complete with obligatory "portaloo"): 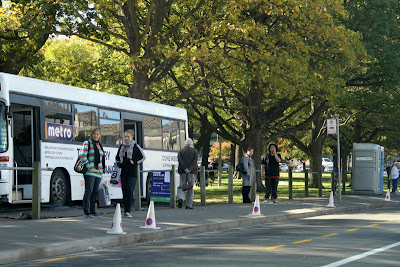 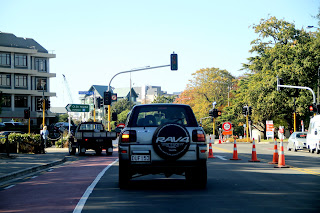