Congratulations to all the Solar Impulse team and pilot Andre Borschberg on successfully completing the first part of the epic crossing of the Pacific Ocean from Asia to Hawaii! 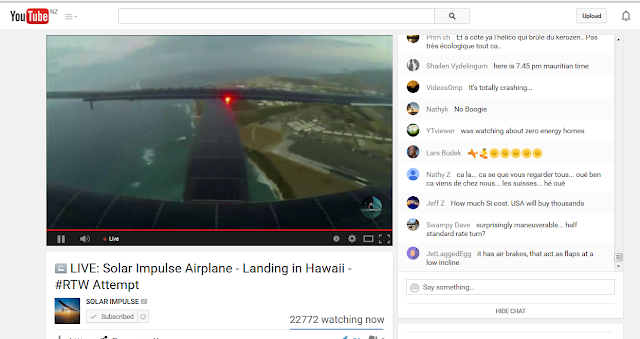 If nothing else, their efforts should be commended for the technological and human endurance/endeavor/pursuit aspects involved.  This is especially considering that this was a solo flight that lasted close to 5 days, in an unpressurised and cramped cockpit, in a lightweight and fragile aircraft with ungainly proportions, while pushing several technologies to their limits  (e.g. long range weather forecasts, and management of battery power resources to sustain mission critical equipment).

Sure, a lot of these limitations were kind of self inflicted due to the limits of what battery technology and solar panels can offer (at least currently and in the short term future at least). The fact that so many compromises were needed to get a thing like this to fly (in the limited ways that SI2 does) does raise some legitimate criticisms of the sensible viability of these technologies for manned aviation. However, on the other hand, this project is a testament to the sheer awesomeness of humans and our ability to tackle and overcome complex challenges.

Personally, I've really enjoyed following the progress of this flight over the past week. Well actually, seeing it finally actually take place after waiting for over 2 months for the weather to play ball and allow them to take off, with all the various demoralizing delays and setbacks (like scrubbing a 2nd takeoff attempt in as many weeks 5 minutes before the scheduled time with the whole world watching... man, stuff like that does really suck big time).

Particularly enjoyable were the broadcasts of the whole thing. Especially since this leg of the RTW was for once occurring more or less in the same timezone as me for a change (and actually for one day, it actually was in the exact same timezone), and that they had near-continuous live broadcasting of footage from the plane and support crew. The morning shows in particular were an awesome mix of interviews and discussion of the technical aspects of what they were doing - what the flight plan was and how that related to what the weather was doing, etc.

It was amazing how the pilot managed to stay in such a good mood and remain so fresh looking (some times I dare say, looking even more energetic and vitalised than many of the people following along   ccough cough) for so long.

As another commenter noted, it was interesting to experience firsthand just how engrossing a real life Truman show is! Like one that is actually doing something interesting/exciting instead of inane.

Observations on various things:
1) Man... that oxygen system... There was an almost spiritual aspect listening to the pilot's regular "darth-vadar" sounding breaths - it got annoying at times on the live feed (heck, I could hear it from the other side of the house without it being turned up too much!), but it was also quite reassuring hearing it continuing steadily. However, that said, it was quite freaky how from time to time (like, at least once a day it seemed), there would be an issue with one of the masks or something, leading to a scary situation where it sounds like there's a continuous stream of oxygen leaking out like a tap on full blast.

The first few were quite minor, and were usually 1-2 second affairs... but then there was that nasty one on day 3/4 where the leak continued on for 10-20 seconds. I wouldn't want to be stuck in that situation (as you can easily get knocked out with hypoxia after 30-60 seconds, and in that plane, you really can't descend too quickly - definitely not fast enough to deal with emergencies like this)

Hopefully they figure out what's going wrong with those masks! Either that, or bring a lot more masks next time (weight/space restrictions allowing), and maybe have a separate mask + handheld oxy-can that's ready to go just in case?


2) If it wouldn't be too much of a stretch, it may be an idea to consider at least allowing the power-management (i.e. speed of the motors) to be able to be tweaked from the MCC, if for no reason other than to not have to wake the pilot some 5-10 minutes into his already fragmented 20 minute rest periods. Especially on some of the choppy nights with the 2nd cold front, they did that several times within a 2 hour period, and it seems that having the ability to do some minor nudging of those controls could have been nice... That said, having the pilot actually do it might still be better from a situational awareness POV (in the event that they did lose contact briefly and the pilot awoke to find the plane in a different state than when he went to sleep!)


3) It would've been cool to see the weather/satellite maps overlaid over the map on their website, to better help the audience get a feel for what the skies are like out there. Trying to assimilate this myself from various satellite weather pages was tricky at times... easy when they were still near Japan, but nearly impossible by day 2-3 when they were in the middle of the sea!


4) Regarding the website: Umm... there are definitely some rough edges there (though it's cool that they had the realtime telemetry showing there... I often wished that other previous mission pages for other projects would show us these things!). 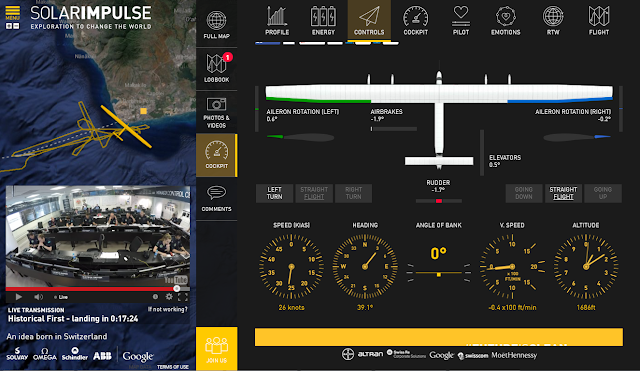 - On desktop Firefox, it's not a good idea to leave it on for too long, as that will make FF bog down. Then again, keeping the Twitter feed and/or the live feed up for quite a while too was not a good idea either, as those too suffered from being kept on for several hours at a time.

- On my Android phone, there were some coinicidences with loading the SI pages at some point, and my battery running out a lot faster that day. While it might be a browser bug, it also smells a bit like a background thread for grabbing updates from the server is not getting killed when the page is closed...

- The initial "spin up" of the dials on the "Controls" page is annoying. It's a nice touch the very first time you see it, but not when jumping between tabs!

- It'd be nice to see somewhere what the power/speed on each engine is. It might be nice to have this alongside the battery charge/"Energy" page?

-  Is the "outside air temperature" the temperature inside the cabin, or actually outside the plane? Seeing as it mostly didn't get worse than ~0 C, I'm guessing it was the cabin temp?

- Checking the team profiles, the site varies between a plain page, to an overlay over the normal page. The problem though is that this means that there are now two instances of the auto-played video now playing, with one of them delayed by a few milliseconds, so you get a freaky double-breath effect.

- The stuff on the "pilot health" page wasn't really kept up to date often enough, that it was basically not that meaningful. Well... perhaps seeing the food rations go down by 2-3 a day, and oxygen by 1 bottle a day was informative of the progression of time ;)

It's a shame that the battery damage issue was a lot more severe than anticipated, and that they had to postpone until next year. Dammit! Now I'll have to wait till next year to keep following the progress of this project (though that might not be a bad thing for productivity in the meantime... hehe ;)

From the CNN article: Ahh... so finally we learn what the "electrical system issues" they had on day one were...

Sheesis! The situation was indeed a lot freakier/dicier than anyone following along realised/could know about during the flight. (At the time, I thought it might've just been the GPS playing up again or something small-ish like that). Specifically, the pilot wakeup system being out of commission - AKA one of the more important safety systems - and having to rely on a backup/alternative system jerry-rigged on the fly?! No wonder he complained on night 3 about waking in a panic because the alarms were all the same! And those battery overheating woes... gulp... from the MCC coverage on later days, it was clear that they were getting quite concerned about it as the plane went through the "longest night". Welp... we now know that if you're flying/designing a solar powered plane that you need to be a lot more careful about having ways to cool batteries down in flight, especially when you're climbing/charging them. Heck, it sounded like they were generating more power than they were able to store + use at times!

All in all, it's even more impressive when we start hearing the technical details of some of these things!
Posted by Aligorith at 5:00 PM