While checking out a bug report today, I realised that the current GUI for the Action Constraint doesn't actually make any sense from a workflow/IA perspective. The following diagram explains exactly why: As can be seen, the parameters used for the input and output ranges are all jumbled up. It is not that clear to see that:
- The "Transformation Channel" refers to a value from the constraint's "target" (i.e. "Driver_1" here)
- The "Convert" field here only refers to how the target is used
- That the target range is used as input to looking up values in the Action (the layout implies the opposite, especially in left-to-right languages)


Hence, in an attempt to clarify this relationship, I've devised an updated representation for trunk: 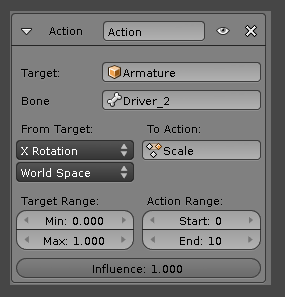 There's also less clutter, since some of lengthy (and often truncated) labels before aren't really needed anymore. By using layout for grouping and classification, we're able to figure out what they mean and how they related to each other given the extra contextual information.

As you might also notice, I've switched the order of axis displays to be in front of the transform name (just like in the Animation Editors). However here, this has been done because the widget names often got truncated, missing out the interesting parts of the text. By switching the representation, the interesting stuff still gets shown when the layout gets compacted.

Before I finish off,  thought I'd make a quick note about the target range units, since this was the topic of the bug report I had been working on.

Since the number fields used here are used for different types of transforms, we can't explicitly put any units on them (at least not from the PyAPI in its current state. See my earlier post about adding units to active keyframe panel for more details about these issues.). Hence, all quantities here are in Blender's default units for various measurements:
- Distances/Locations are in Blender Units (1 BU = 1 m by convention)
- Rotations are in Degrees
- Scaling is, umm... Scaling Factors!

Hopefully this will clarify any confusion out there about this constraint.
Posted by Aligorith at 2:27 PM