Wow! Tonight the light bulb over the dining table just popped out of its fitting without any provocation beforehand, shattering just beside a loaf of bread on the table, and spreading shards of glass everywhere. 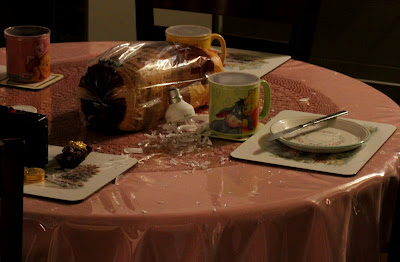 Barely minutes earlier, I had just finished having a tasty sandwich (strawberry jam + tasty cheese... mmm...) for a bit of a late night snack (why does everything taste better at this hour?), and had been sitting there at the table, with the light turned on.

Yet only minutes later, having turned off the light and returned to my room... CLLAAANNGG!

The light had somehow fallen from its fitting, shattering into many many shards of glass, all over the table and floor. I guess you could say that I was quite lucky to have just missed it by a few minutes. But crikey! This was supposed to be one them fancy "energy saver" lights that "last longer" than their old tungsten counterparts. So far though, I've yet to see that being the case!

Speaking of other strange happenings, over the past few days, there has been one particularly nosy, plump, and stubborn bumble bee that has been repeatedly coming into our house. As soon as we'd manage (after a lot of coaxing and swatting) to get it out of one room via the window, would it find some way to come right back in via another window, on the other side of the house minutes later! Heck, just the other day, I was awoken by a bit of a buzzing noise, and soon found "'ol sweetie" fussing about the curtain, before wedging itself miserably between a few posters in the corner.

Maybe it's just all this warm weather we've been having recently!
Posted by Aligorith at 12:40 AM