Well, the clock didn't just tick midnight now.. that was over 24 hours ago now. But, nevertheless, Happy New Year to everyone! Let's hope that 2012 turns out to be a brilliant year (albeit quieter on the seismic front here in Christchurch please, if you will mother earth :)  ...  erm... speak of the devil... a sizeable wobbly jolt struck just moments after I finished typing that last sentence. Drat! 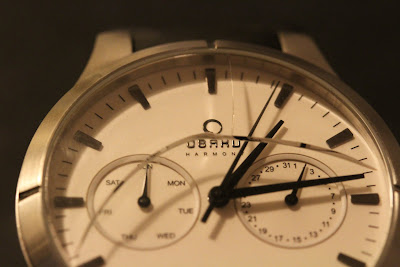 This morning I was shocked to find that overnight, my watch had developed a great nasty crack across its face. But it had been fine the night before, and I seriously don't remember whacking it into anything hard...

I got it before Christmas just over two years ago now (come to think of it, this was the same Christmas that Bubu became part of the family on Christmas Eve). That was quite an emotional time for me back then, coming off the back of a raw shock loss (partially if not significantly influenced by an bout of untimely illness the week before, which also subsequently marked the end of a decade-and-a-half long chapter), but also on the day when I got in the mail some very good news which I've spent the past two years pursuing fervently.

That afternoon, while taking a walk around the City Mall, I came across this watch in the window of a store I'd never entered before in the Guthrie Centre. At that point, it had been a few years since I'd regularly worn a watch - practically since my first ever watch (a simple round silver with white face and black leather strap + day of month ticker one), the crappy one I wore after the first's battery died without warning just before I was about to head out to play a concert as leader of the Primary School's Music Festival Symphony Orchestra (a 2-week long festival, where every Primary and Intermediate School in town would participate, and getting into the Orchestra and other special performance groups that got to play in each and every concert and also time off school in the mornings was a by-audition thing), and a few other ones I was not too fond of after the crappy one's strap snapped off one day.

Anyways, I ended up trying it on, and liking it quite a bit. Finally, a throwback to that first watch that I had loved so many years ago (and which still lies in its box on the bookshelf nearby). Something that had a comfortable leather strap, and not one of those metal chain ones with that folding hair-clip clasp thingies that would always end up badly pinching my arm when trying to get them off. It also had a nice, round, and clear to read face, complete with day of month (this comes in handy, since I can never really remember numbers that well, especially what the current date is!), and was a comfortable size.

For some reason, I've never really liked digital clocks... there's just something missing that analog clocks with their round faces always had about them. Perhaps it's in the genes. My material grandfather, whom I met just once when I was 3 on a trip back to Hong Kong (when he was on his death bed with lung cancer), loved to fix and tinker with watches back in the day.

Since then, it's presided over a productive two years, where the "ups" have certainly outweighed the "downs". In stressful times, such as during exams and also the uncertain times around the quakes earlier, it's been great company.

The shop I got it from has since been forced to close (though apparently they're still doing repair jobs) courtesy of the February Quake, which damaged the Guthrie Centre, leading to a lot of back and forth wrangling between CERA and the owners+architects before it was eventually bowled along with the majority of City Mall under emergency legislation. I wonder what happened to their poor goldfish that they had in one of those tall tanks beside the door. There were quite a few of 'em in there; IIRC, they were all getting on in their years - calico fantails, and a few black bulging eyes.

I'm hoping that I can get the glass replaced on my watch. Having taken a look around for potential replacements, I haven't seen anything that I've really liked yet. So, fingers crossed that there'll be a resolution to this and a few other admin issues which have needed ironing out over the past few weeks.

Anyhow, let's hope that this will be a great year for all.

BTW, the quake which struck earlier this evening was a 5.1 tremblor (15 km deep). Out at sea again, as have all the recent ones, which are perhaps a bit alarmingly close to a previously unknown underwater faultline discovered in a study last autumn that is allegedly capable of a greater than 7 magnitude quake. I'm not sure exactly of the tsunami risk of that one, but nevertheless, we'll definitely keep an eye on that thing. Say... around April perhaps (I hope I'm wrong on that one).