After close to four years of using my Canon 7D (I got it in early September 2010, about 1-2 days before the first quake - I still hadn't properly unboxed my macro lens when the 7.1 struck, which sent that lens-still-securely-boxed-up flying into the trash can into a soft bed of crumpled tissues), today I suddenly came across some features I hadn't known existed. One thing led to another, and now I've just picked up a bunch of new features which look interesting enough that I'll need to spend some time playing with them for sure...


1) White Balance Shift + Bracketing
White Balance Presets
For the past few years, I've mostly gotten by using the white balance presets. In an earlier version of a tips & tricks post I still have in draft form, I'd gotten these down to something like:
- Cloudy: On nearly every camera I've come across (including the 7D), IMO this is the best all-round white balance mode. Even in bright sunlight, I usually find this one the best for bringing out the rich colours I love. Daylight and AWB (in particular) tend to end up too blue, with perhaps even a slight gray tint too (in the case of AWB).

(Speaking of gray tints: Left to its own devices, the Canon 7D tends to overexpose when using the EF-S 60mm Macro Lens. Specifically, in Program or Shutter Priority, it has a habit of choosing F2.8, along with other settings to overexpose by 2/3 to 1 stop. Then again, I generally like underexposing by -1/3 or -2/3, as it fits my post-processing workflow better, since I find it easier to brighten stuff than to make the mid-tones richer)

- Shade: The big guns for warm shots. Obviously it's useful when facing into a shady spot, or when slightly backlit (but without the sun in view). But the real power point IMO is when shooting macros (especially flowers, or really anything with some sunlight but not in direct sunlight - and especially during golden hour). Combined with some very deliberate underexposing techniques (aka -1 to -2 stops, or choosing 1/100 + F5/F5.6 as a base and darkening from there), and just a little "stray" magical golden light, you're on track to getting an absolutely magical and mysterious result from that.

It's also really good when you need strong punchy colours for taking shots of things during autumn - just stay away from using it when your subject is directly lid by the sun as it turns things a sickly brown.

- Daylight: I've struggled with defining what exactly this preset actually does for a long time. Two years ago, when sitting down to write the aforementioned post, I thought I had it down pat - "use Daylight when you want to get a richer blue cast - e.g. during the 'blue glow' phase of a sunset/twilight times.  Closely related to this case is when taking shots of the blue sky, where you do want to emphasize its blueness (instead of how fluffy the clouds look); in that case, cloudy does end up having a slight yellow cast which you might not want.

However, over time, I've found that it does in fact have some other uses.  The biggest is that it is good alternative to using Cloudy at night (and taking shots of light displays/stuff) if you find that Cloudy is "too" yellow/orange - Daylight in those situations will usually be a tad cooler, and often "just enough" to get what you need while still retaining much of the warmth, though not always.

- Tungsten:  While this is usually labelled as the "indoor" light mode, I've found that this is only really suitable when dealing with halogens (where it really shines... then again, halogens are really awesome, producing some of the prettiest light around).

However, it's not so great when you've got any humans around, colourful stuff that needs to retain its impact, and/or the types of standard tungsten lightbulbs we've got around the house. When you start combining those elements, all of a sudden, your people start having either magenta or sickly-yellow cast, while everything else looks rather desaturated. Not exactly that appealing when you're dealing with a cake or some tasty food!  (And we haven't gotten to those blasted "Energy Saver" lights yet - those devilish things are a photographer's worst nightmare when it comes to white balance!)

- Fluorescent: This mode is generally useless, unless you find yourself in a fully enclosed growth room lit solely by fluro light tubes. In that case, the strong deep-blue cast of this white balance mode is the only one which can counter the slight magenta casts you get.

- Auto White Balance: Not so good in natural light, but is your most practical choice for artificial light, especially when you've got multiple light sources. Sure, it tends to be on the cool/white-gray end of things, but at least there will generally be no major nasty casts. But, the downside is that this is highly unpredictable, and can go from really nice, to magenta/sickly-yellow casted in seconds.

- Custom White Balance: This is like a more stable version of AWB, but a lot clumsier to set up, and still with the cool/white-gray bias. Perhaps for product shot photographers, working from the comfort of their studios with static subjects, this is ideal. But once you get a room full of people in there, forget it. (I might come around on this view, but so far, I haven't been able to master it yet)

- Kelvins: When the above all fail, dialing in the temperature is the last resort to "do it in camera". It ends up being a game of trial and error though (especially when you're first starting out with this, and can't remember which values stand for what, and how you should be trying to bias those values to get the artistic effects you want).

Personally, I generally use this one when dealing with "plain" artificial lighting (i.e. anything you commonly find indoors) or "fancy" lighting (i.e. neon lights - Daylight works well for that, fireworks - Cloudy is quite nice for those) which cannot be tamed with Daylight, Cloudy, Tungsten, or AWB. So far, the best usecase for I've found for this has been to deal with Lanterns, which need 2800 - 3200 - 3300 or so to look warm enough yet not cast strong nasty-yellow casts over the whole frame.

- Just shoot it as RAW. When all else fails, that's the only option you've got. Not always an option when on a tight space budget (i.e. when travelling overseas with only 1 card + a few spare shots), but for those rare and "important" shots (i.e. think big group gathering, etc.), this one has to be considered.

There's one use case in particular I've consistently had to fall back on for this: during twilight on especially clear, calm days (like we had tonight), there's a brief window when you have a blue + blue-green + green-yellow + yellow-white gradient across the sky (e.g. like this). It is sometimes captured in some illustrations/children's book art. But it turns out that getting that magical blue-green colour is nearly impossible using ANY white balance mode. They only ever end up giving me the normal "deep blue up top, fading to a yellow-orange-white at the bottom", often with the middle whitened out a bit, and all of the lovely green cast completely removed. The only way to get it is to manually dial it back in by applying a white-balance tint/cast to the raw file. That sucks.


White Balance Shift
While shooting today, I suddenly noticed an option I hadn't really paid my attention to before: 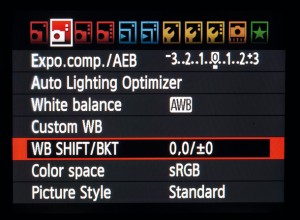 Opening this menu entry, we get the following screen: Ooh... Using the joystick thingy, you can move the "bias point" (which defaults to being perfectly centered) into favouring Green over Magenta, Amber over Blue. In other words, there's the potential here for finer control over exactly how the white balance handles certain combos.

White Balance Bracketing
Related to this feature is the ability to have the camera take two additional versions of the picture - one with blue-yellow offsets, and one with green-magenta offsets. In effect, letting you compare which bias works better.

Verdict
These two features sound really enticing. I'll have to try these out over the next few months in a variety of situations, to figure out just exactly how they work

For instance, I'm not sure yet how they interact with the presets, or even how to use this in place of the presets (if that makes sense)...


2) Electronic Level Indicator - In the Viewfinder
I've known for years that there's an Electronic Level Indicator feature built in. You can activate it by pressing "Info" 3 times (in standard view) and a level indicator will get drawn on the back of the camera. However, that makes it almost useless when trying to frame things up in the viewfinder, as it's hard to keep things still to check if things are level when working like this.

However, a tip I spotted while looking up the lodown oon White Balance Shift/Bracketing noted the existence of this feature, and how it can be activated using the M-Fn button (i.e. the little tiny nib beside the scrollwheel next to the shutter button). By default though, that's not how the camera is configured! You have to manually remap that key to show the indicator, before it can be used.

Once you've got that enable though, it should use the AF points in the viewfinder to provide you with some alignment hints. I played with this briefly, and it does seem to show some rather funky things, but I'll need more practice before I get to grips with how to use this.