By now, you've probably heard the sad news, probably more than once, that Robin Williams passed away today. Besides shock that this happened, there's also sadness that the world has lost one of its most talented stars. This is perhaps particularly so for our generation, who grew up with watching a considerable number of his films.

It's kind of surprising in retrospect how many of the iconic films I can think of from that period he starred in, and how these have shaped our lives/childhood memories. In particular, I particularly remember him in Mrs Doubtfire, Patch Adams, Jack, Flubber, Jumanji, Dead Poet's Society, and Bicentennial Man (*1). 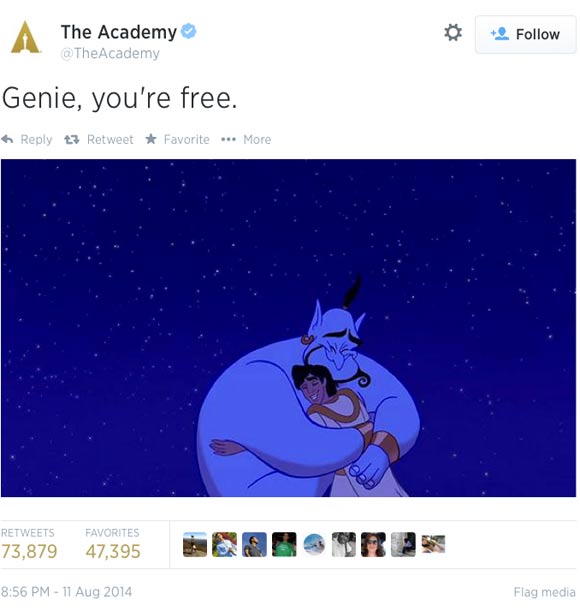 I have also come across bits of his work on Aladdin (as the Genie - admittedly I've only ever watched short clips of this and not the whole film), Hook (though my memory of this film is fuzzy, since I've never been too big on the whole Peter Pan story/universe), and Robots (whose NZ premiere marked the opening of the Hoyts cinema complex nearby).

Anyways, for me, the "classic" Robin Williams will always be the "Mrs Doubtfire/Patch Adams/Jack" kind of manic, slapstick comedy, and his effortless + impressive vocal control + impersonations. In other words - great entertainment for everyone, both young and old. And perhaps that's why his passing has hit a chord with so many people.


*1 - This film is perhaps the first example of one of the early Sci-Fi films I've watched that ended up giving me nightmares later in the night after watching it (and taught me to avoid watching anything potentially "troubling" in the evenings). Particularly bad was the walk to the toilet in the dark that evening, perhaps 1-3 hours after watching the film earlier, with the nagging sense of being followed by heaps of electronic/mechanical eyeballs, lurking around everywhere in the shadows and outside beyond the windows, peering in... watching... following... thinking... preparing to pounce...

It wasn't Mr William's performance in that film, but rather the subject matter which I found creepy. Robots. Human-like robots. Loads of fake eyesballs staring vacantly at you. Electronic brains enclosed in a clear-glass globe being covered with a clay-like skin-coloured dough that gets kneeded and moulded. Heads being transferred, and human-like bodies being unzipped to reveal blue glowing innards. *Shivers*