Yesterday afternoon, I left out two pieces of bread for the birds: one on the lawn, and the other on a bush near the windows. This morning, I was greeted by the sight of a flock of silvereyes merrily feasting away, on the piece of bread closest to the windows! 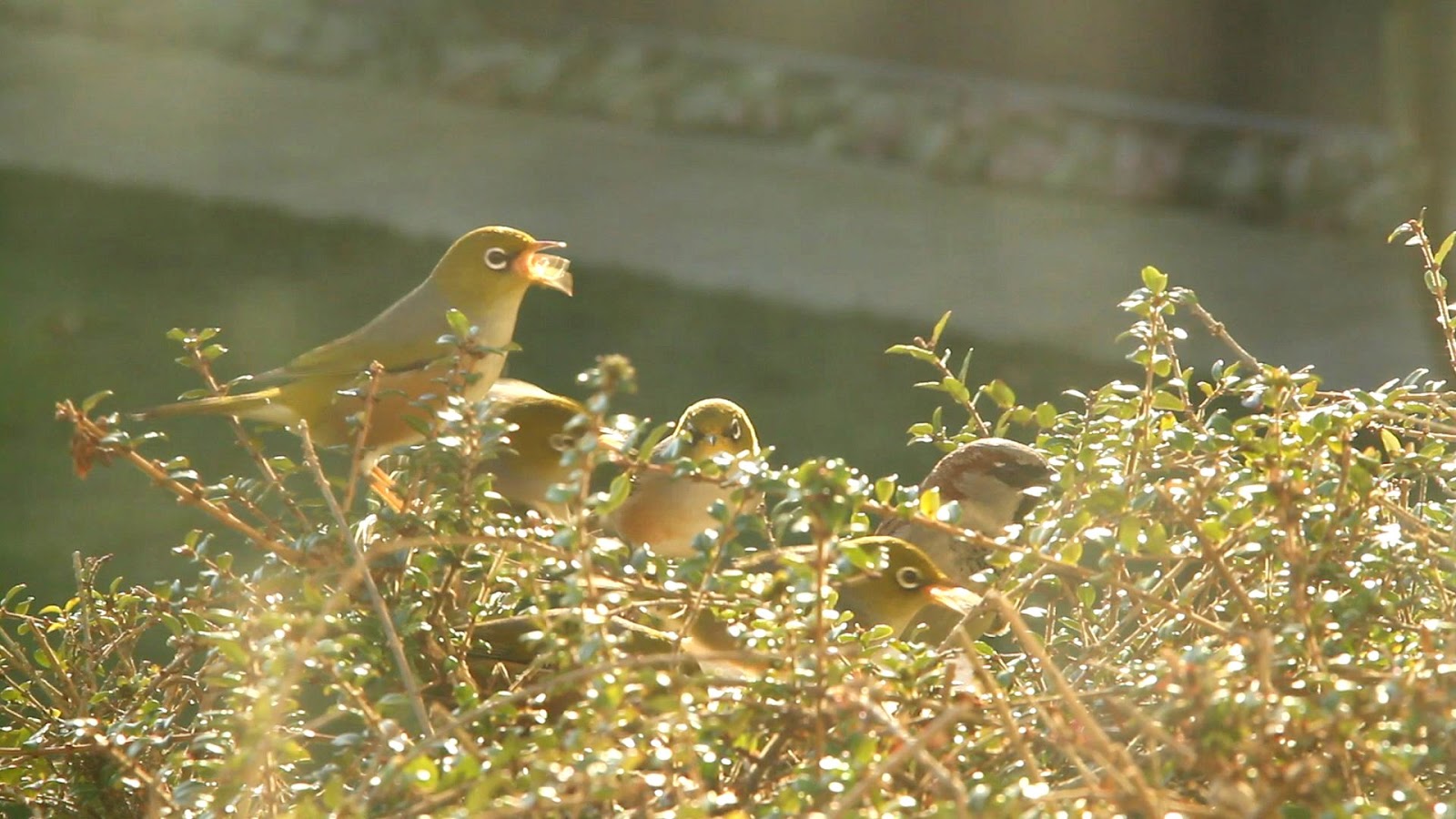 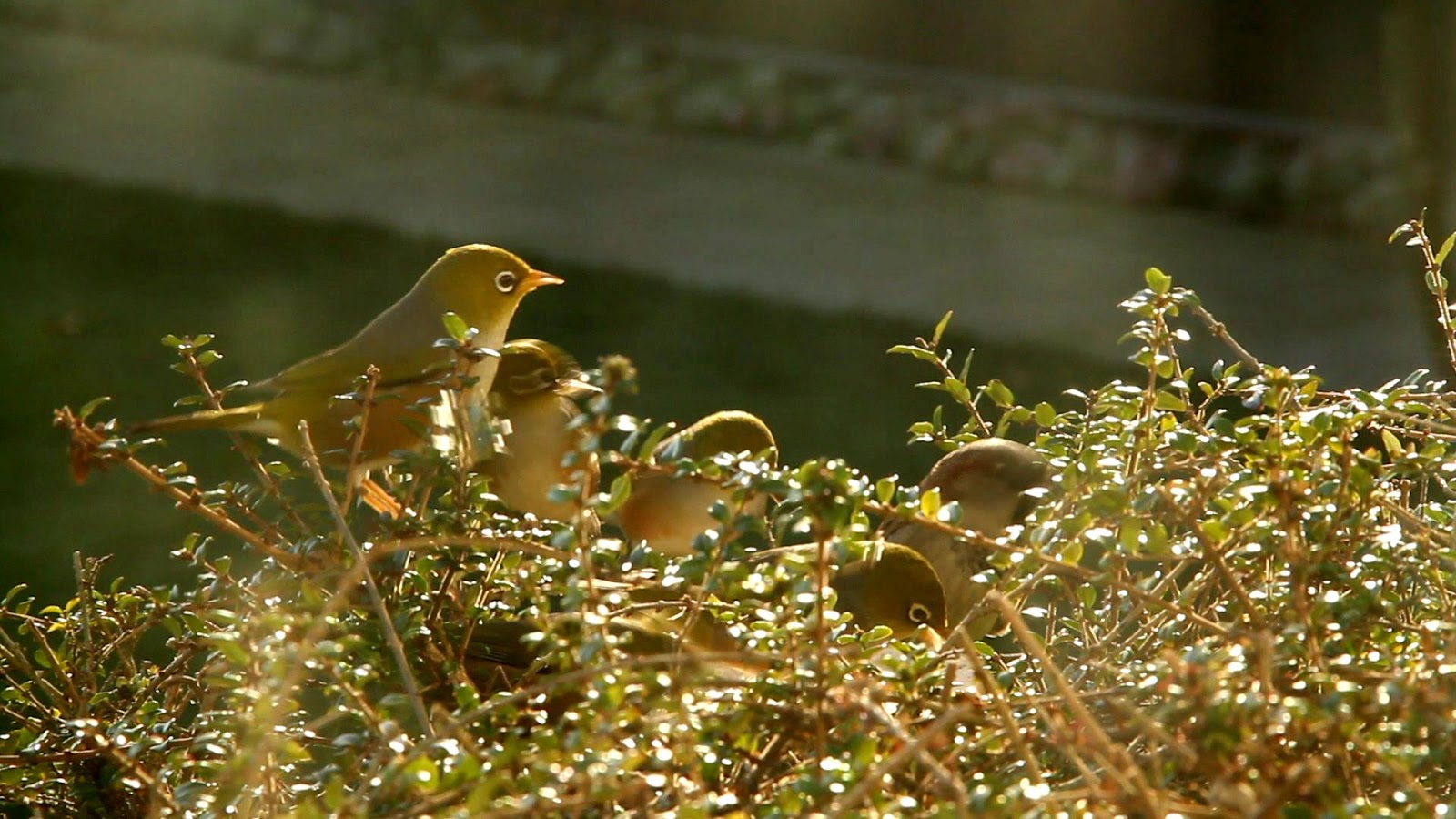 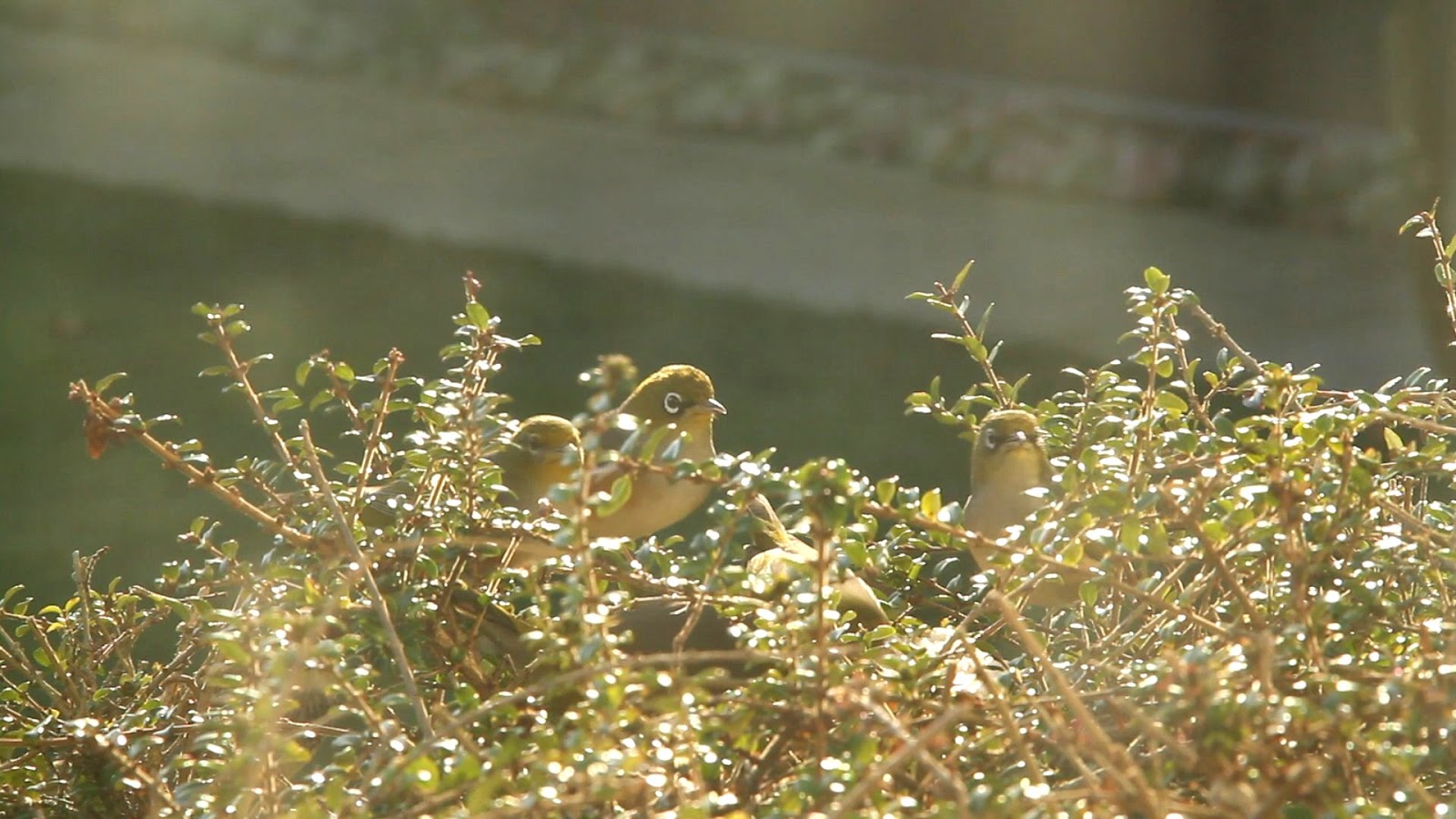 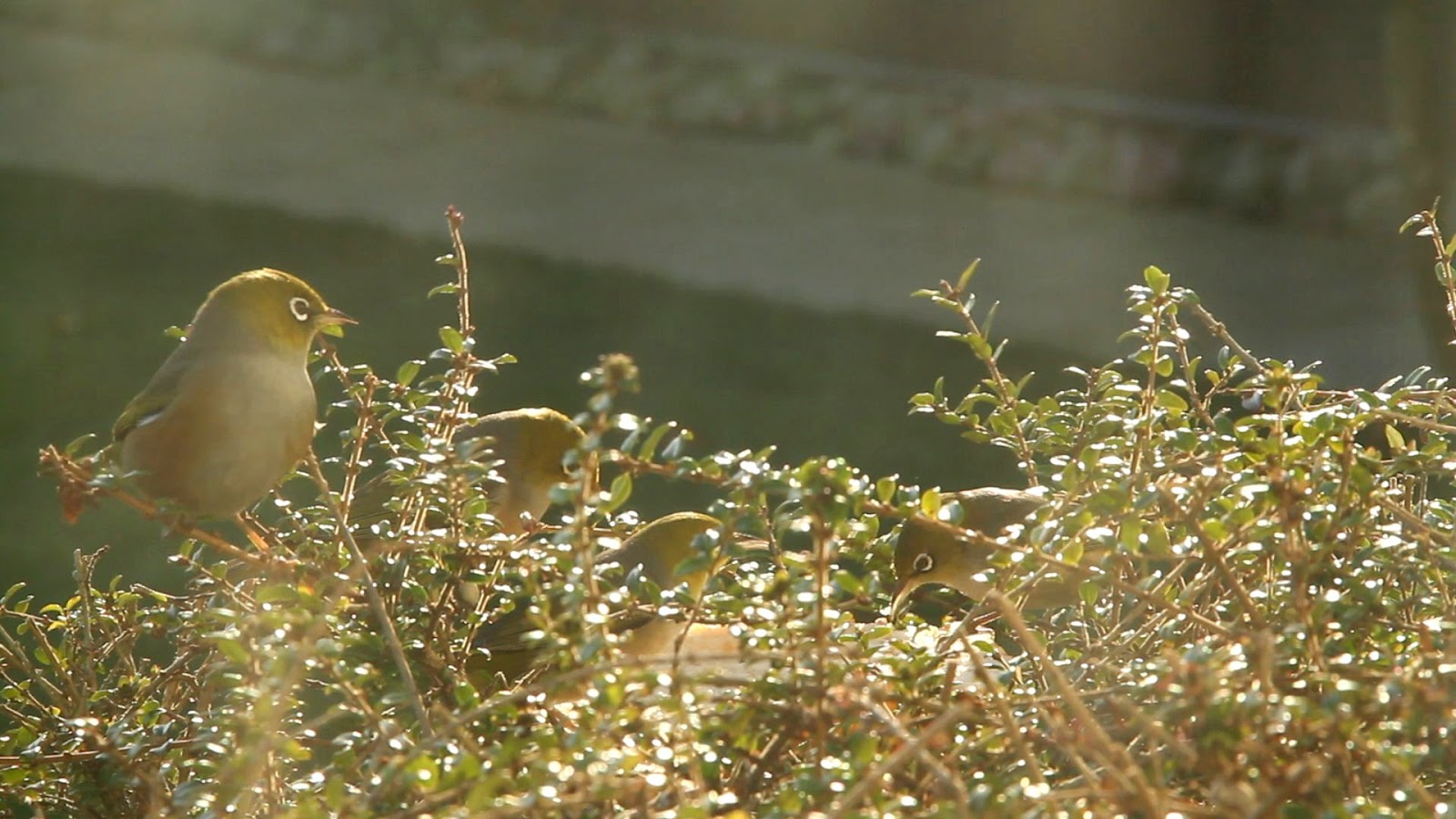 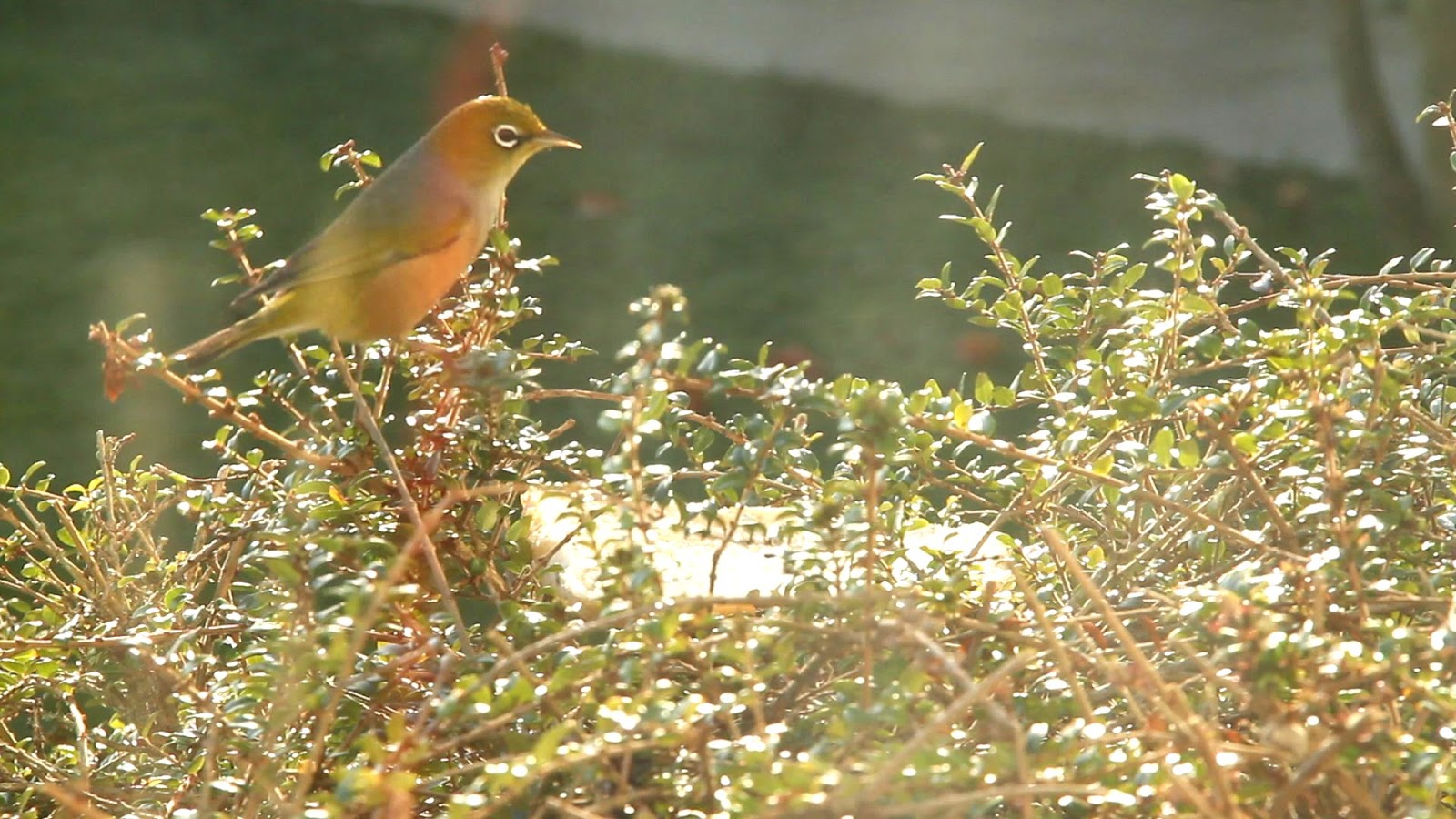 These shots are actually screenshots from some video footage I shot of them. I'll have these up later today or tomorrow once I get back to the office (since the internet is faster there).

As expected, the neighbourhood birds were initially skeptical, suspiciously perching on branch overlooking the lawn, peeping at the bread huddling as if conferring with each other, and then flying away before coming back to the same spot and repeating the cycle. Within half an hour though, the sparrows were feasting on the bread on the lawn, soon followed by 2 aggressive starlings (one of which would stand on top of the bread while eating, before the other would attack from above with a "drop in" attack). However, no birds dared to touch the bread on the bush.

There was no sign of the silvereyes either, despite a large flock having earlier appeared in our garden flitting the between the two camelias. Judging by the number of chewed-up leaves, I imagine they were probably snacking on a buffet of tasty insects hiding amongst the foliage. Go silvereyes!

Overnight, temperatures dropped down to -2 deg C, with a light frost on the lawn, so I wasn't expecting much to happen. But lo and behold, early this morning, I was woken by the sound of some excited chirping and some characteristic energetic shadows zipping around: a cluster of silvereyes were busily munching away on the piece of bread closest to the window! (Meanwhile, some sparrows and the starlings were duking it out on the frozen lawn, with the piece of bread already a mere half-palm sized patch and shrinking by the second)

Getting some shots of them proved more difficult though. Besides condensation to contend with (which was dealt to quickly using the Karcher Window Vac), the angle the sun made with the glass caused problems with contrast reduction and reflections. Oh, and don't forget that these are birds at close range, so they can and will get startled by any sudden/sharp movements.

Anyways, was it worth losing a bit of sleep over (despite being up late the previous nite bashing out one quick blog post on a tablet)? Yep.

Will I do it again? Definitely - but next time with a different "dining table" that's more amenable to setting up a camera, and probably with some more goodies set out (i.e. fruit, butter, or some sugary water). I'm sure they'll enjoy it as much as I do :)
Posted by Aligorith at 12:44 PM