This morning I was out at the airport. Over the past few years, there's been a massive construction and renewal processing taking place, with a new integrated domestic+international terminal being built. This opened a month of two ago... 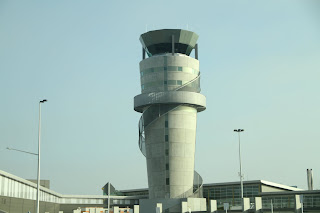 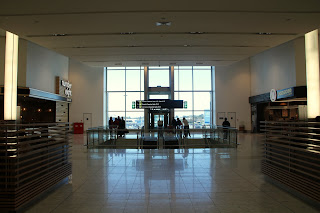 From second-floor foodcourt in new terminal

On the way
This morning was one of the two types of typical winter morning: cold, crisp, and cloudfree (the other version is cold, dark, and heavy rain). 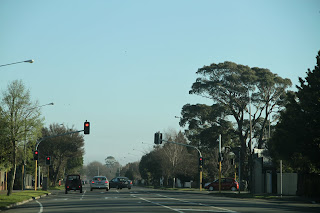 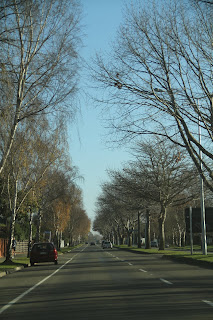 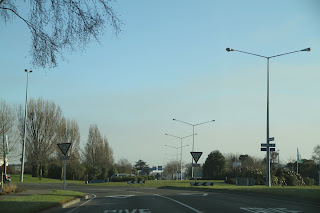 Although not shown here, this roundabout is always a bit of a nightmare to navigate, with through traffic (numerous trucks among them) travelling 80-100 km/h screen left and right, and traffic travelling to/from airport (straight through) at 60 km/h only.

I often wonder why traffic engineers think it is safe to put high-speed roundabouts/motorways out of airports, where jetlegged passengers (some who may not have slept) are able to just grab a car and hit the road ;) 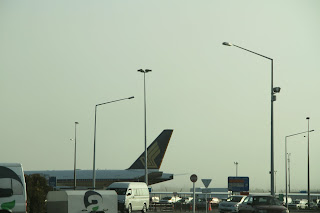 SQ298 to take off at 11am for Singapore (where it lands late afternoon). This is the same plane that does SQ297 overnight from Singapore. Basically, this 777 spends its time jumping between these two destinations, spending a few hours on the ground at each destination each time.

I know, since I was on these flights last year :)
(Besides, by the time I left, the plane was gone too - obviously on its way to Singapore again)

Ground floor - check-in hall (for both domestic and international) 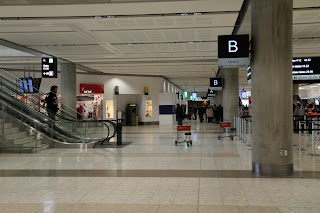 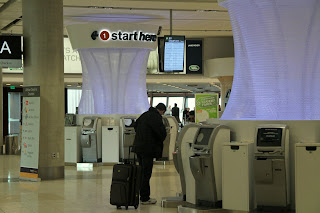 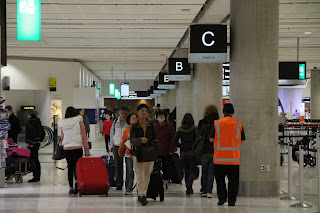 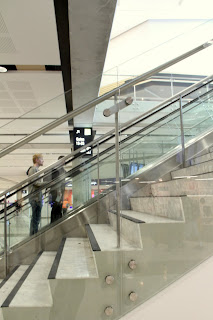 Fog In, Fog Out
While at the airport, the fog rolled in for a while. Numerous smaller flights were diverted, with passengers for those being told to "go and fetch [their] baggage from the conveyor belt and go to the counter to rebook [their] flight". Unlike volcanic ash, fog can be seen, but is seems that this is something larger aircraft are equipped to deal with (unlike the former). 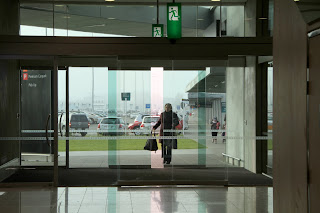 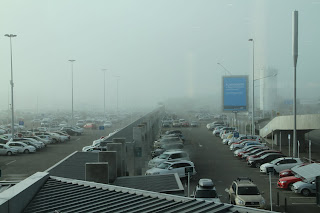 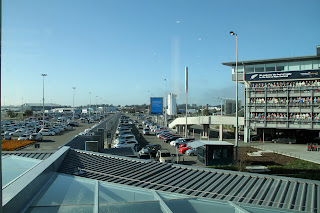 And a beautiful day again once it clears! 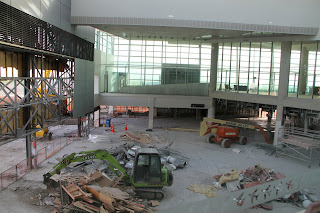 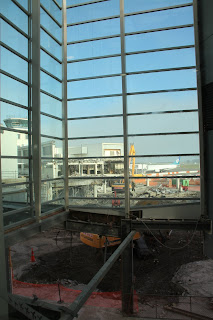 Apparently, there's some kind of weird arrangement where parts of the old terminal are still being used to get people on to the domestic planes, since the new terminal was built in front of the old one, where the taxis and flower-beds used to be.

<no-offense-intended>
Silly Americans and their neurotic security procedures concerned about shoe, underwear, and bottle "terrorists" (apart from the balaclava'd ones, this description could equally apply to babies ;) As a result of this, we have long lines at airports where people have to line up, unpack their bags and themselves, walk through a scanner (and then optionally get probed over again in a "special" checkover), and are forced to pay rip-off prices to buy drinking water once they get through to "the other side".

BTW, having had two watches needing to get "de-magnetised" after they mysteriously stopped working not too long after having passed through these security scanners in separate incidents, I generally end up taking off my watch and burrowing it deep within any hand-carry I take before passing through, which seems to have worked well so far.

Equally perplexing is their insistence that electronic equipment (specifically laptops) get taken out of bags and put in trays. Unfortunately, this policy is not followed by a counter-policy that security staff take proactive steps to ensure that they do not drop, bump, or otherwise massacre the equipment as it leaves the scanner on uncovered and unpadded trays on the other side in a hurry, out of the protective bags they'd otherwise reside in for the rest of their journeys. For a student flying back home a few years ago, they saw this firsthand, as a checkpoint officer "accidentally" dropped their laptop, rendering the thing completely inoperable, with apparently no official provisions for any liability in such cases.

(BTW: I wonder what the scanner would see, should an slr with telephoto lens zoomed in be pass through with the lens facing upwards, and a mirror strategically placed behind the viewfinder. Not that I'd be willing to find out using my own gear on the way to a holiday somewhere ;)
</end rant> 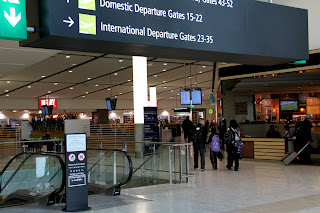 Second-floor, looking towards the foodcourt. Finally we have an airport which looks a bit more world-class than a granny's tearoom. 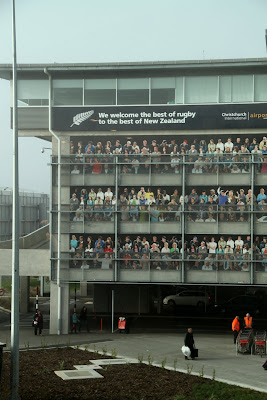 Carparking building - complete with some interesting decor (which was planned for the Rugby World Cup being held in NZ later this year). It looks more effective from the ground (than it does in this shot).

Posted by Aligorith at 5:37 PM