I just got back from a fun rainy afternoon watching Finding Dory  :D 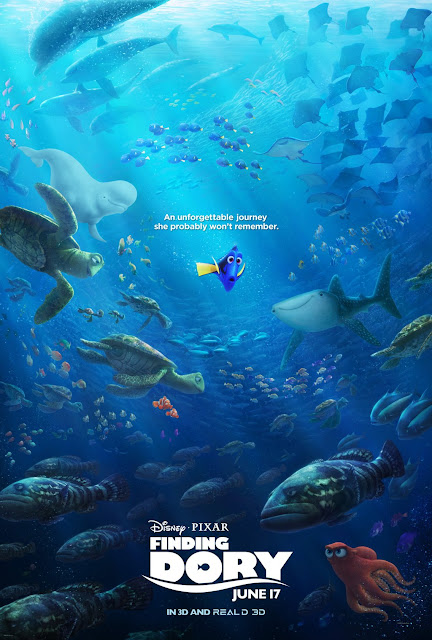 First off, let me just say that I am a huge fan of the original Finding Nemo. To this day, it is still very much my favourite film. It's also notable for a number of other reasons, including my love of computer animation and introducing me to the work of Thomas Newman (my favourite composer).

As for Finding Dory, I like it a lot. It is one of my favourite Pixar films (within the top five, with Finding Nemo, Ratatouille, and The Incredibles/Wall-E).

Overall Comments / Best Parts:
* The lighting and rendering in this film are GORGEOUS! In particular, most impressive are all the shots with either heaps of fish swimming around, and/or those set in the Coral + "Open Ocean" Tank. A great showcase for the new RIS system in Renderman in its first big screen outing.

I really liked seeing those high-detail shots on the big screen, with all the colourful fish/corals and awesome detail to look at everywhere. Compared to when I've seen these shots on my monitor during the trailers, on the big screen, you can really appreciate all of the fine detail that went into it.


* Related to this, there were quite a few interesting visual effects used:
1) For some strange reason, the fish swimming in the background during one of the opening montages in the murky water seemed to have that high frame rate/smoothed-motion-TV look to their motions. I'm not sure what was going on there - was a high frame rate actually used for this film, or was it something to do with the motionblur there?


* It's true that there were quite a few bits that could be counted as "fan service", but it was fun seeing how they came up with some new characters that were similar yet different. The most notable of these were: the Giant Squid Chase vs Sharks + Angler Fish, Seagulls vs Sea Lions (even though the seagulls DID appear later), and Pelicans vs Becky.


* There were a few moments in the third act which were quite awesome: e.g.  The whole "truck" sequence (but particularly the ending to that... dunno, but there's something about seeing things flying in slow motion there that was just hilarious).  Also, the reveal with the shells ('nuff said).


* Hats off to the animators who worked on the octopus. Posing all those legs must've taken a lot of work :P

I also wonder how they set up the shader to blend in with the background?  (I expect there to be a talk at Siggraph this year about how they made Hank)


* It was cool seeing how they made the whole credits sequence so lively - it was lovely to see that they used some of the sets from the film and continued to animate background characters swimming around  (I wonder how many different species they designed, and/or what sort of setup for generating background fish characters they had).

There were also some really creative camoflaging octopus gags there during the credits sequence.

Even cooler was seeing that although a lot of people still left as usual as soon as the credits started rolling, that even more people hung around at the end to wait for the after-credits scene. Yay!


Minor Quibbles:* There were a few places where it did seem a bit rushed. Not massively, but just a tad.... where things flowed from a to b to c quite quickly within the space of a few minutes, without ever really fully letting the moment settle in.

* Although "Baby Dory" is somewhat cute, I personally don't really like her design that much. Although the big eyes contribute to the whole cute-appeal, they also look a bit overdone, making her a bit more like those big-eyed tadpoles (not cute).

* There was a point about 75% of the way through the movie, perhaps around when Dory was stuck in the pipes or something that I found myself thinking: "Hmm... I wonder what's happened to Marlin and Nemo now instead?"  I know this film is kindof Dory's big adventure, but at that point, I admittedly thought "but I still don't quite care that much about Dory" :/  (Then again, about a few minutes later, things perked up again with one of the big reveals)


Other Comments:
* It's hard not to watch some of the earlier scenes of their journey across the ocean and NOT notice all the pollution in the ocean. It really is quite "in your face" so to speak - the bottles, and containers and shipwreck (does "Rena" ring a bell to any kiwi's?), the plastic thing Dory gets stuck in, and the car/Volkswagen.  Yeah, humans do some messed-up stuff to the environment...

* As always, I loved watching the credits to spot names I've heard of before. This time, I managed to spot not only Colin Levy (of Sintel fame), but also a number of the animators that have given talks at various places over the years. So, that was awesome.

* This time, they also had a new few sections labelled "Global Technology" or something along those lines, and also a dedicated section for the team responsible for helping roll out the RIS technology and new pipelines to production. So, awesome to see these too :)
Posted by Aligorith at 7:28 PM