We're a week into the new year now, and as most of us return to work from our holidays, I'd like to mention a bunch of interesting stuff I came across in the second half of my holiday (i.e. the stuff that came after alternating between lounging around like a vegetable and running around going to exotic locations for fun). I've gotta say, it's been great having a break!

An interesting read, and provides a few interesting ideas that are worth a try at some point...

* Why Time Management is Ruining Our Lives
https://www.theguardian.com/technology/2016/dec/22/why-time-management-is-ruining-our-lives

Some very good points here. I too have noticed that a lot of people these days have an absurd obsession with trying to pack to pack a lot of stuff in to their lives, and to make everything they do "have a some ulterior purpose", instead of just doing for the sake of doing. It's also quite telling that even one of the "self-help gurus" eventually realised the follies of his own garbage... (aka "Revenge of Eating Your Dogfood")

It was hilarious reading about the extents to which a cat owner was willing to go in their fight against an insanely creative, cunning, and persistently hungry/greedy moggy that kept finding ways to steal food from the cat feeder. The final solution (a fortified metal box that blocked off almost every avenue of attack) was both insane, and also quite amazing (as an example of something that some DIY'er hacked together in their garage). 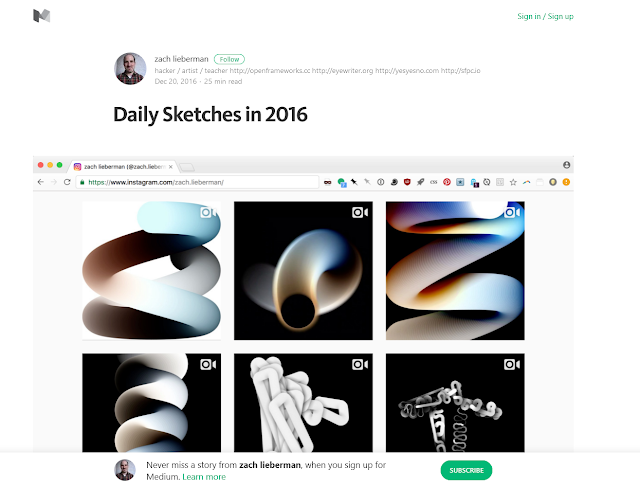 This guy's writeup of all the short creative-coding exercises he got up to in 2016 (during a "one a day" artistic challenge), where for 30 minutes each day he worked on creating some piece of art using OpenFrameworks (basically, a C++ version of Processing) is quite an inspiring and interesting read. Some of the pictures (and the descriptions of how they were built) are more interesting than others - in particular, I'm quite curious about how he pulled off a few of these (especially all the ones with fancy line effects, or the ones where he "traced around the edges of circles" and stuff like that).

In fact, after reading through a bit of this post, I got inspired enough to want to give this stuff a go some time this year. Probably not now, since I've got to get back to work on finishing my thesis, as one of the things I'll investigate once I get the important stuff done.


Playing with Rust
Speaking of learning/playing with new tools/languages/dev environments, a few days ago, I suddenly got the urge to download Rust and have a little play around with it. Truth be told, I've been hearing some good things about it, and seeing as they now have a stable version out, I felt it was finally time to give it a little play around.

So far, I've played around with it for about 3 days. There's still a lot I don't know about the thing, but at the same time, I now have a decent feel for some "everyday aspects" of coding in this language.

Films
Overall, it's been rather "slim pickings" for film watching in the cinema over the holiday break. On the other hand, I did manage to finally see one film I've been waiting/wanting to see for a while, and accidentally stumbled across another that turned out to be quite good.

BTW, one thing that both had in common was that the soundtracks for both are now part of my playlists (for working/listening) :)


1) The Hundred Foot Journey (2014)
Truth be told, under ordinary circumstances, it's unlikely that I would have deliberately gone out of my way to see a film like this. However, on Christmas Evening (Note: not Christmas Eve), this was being shown on TV immediately after the Queen's annual Christmas broadcast. Within minutes of the film starting, it was clear that it was both nicely made, and also quite entertaining.

Things I liked about it:
- Some of the humor/quotes in this film are pure gold. Kudos to the scriptwriter, but also to the cast (in particular, the old Indian guy who plays the dad) for making these work so well
* "Sometimes brakes break for a reason"
* (Regarding Michelen stars):  "Yeah I see the star... 'Twinkle Twinkle'... So what?!"

- The music here has some really nice richness/soulfulness. Particular highlights include the tracks:
* "You Complete Me"  - I esp. love the bit where the composer himself starts humming the main tune near the end
* "Hassan Learns French Cooking" - A nice bouncy, upbeat, and classical sounding piece
* "Afreen" - This is featured during one of the scenes in the film, and TBH, I like it. Stuff like this is not generally my cup of tea, but in this case, it's quite addictive to listen to.

- Some of the themes of this film (regarding racism/tolerance) are particular topical for the world right now...


2) Moana (2016)
Disney's latest offering is visually stunning, but also has a good, solid emotional core, with a very strong cultural component. It's just a pity we had to wait a whole month longer than the rest of the world to see it, even though a lot of Kiwi's worked on the film! (What gives Disney?!). Oh well, at least I got to see this on New Year's Day, when it was a sweltering 31 C and windy outside.

As someone born and raised in the South Pacific, it was great seeing what they'd done - in fact, I've personally been dreaming of setting up an animation studio locally here in my hometown to start producing feature-length animated films drawing upon Maori and NZ culture, and using a mixture of 2D hand-animated and 3D CGI animation techniques, with a crew mainly sourced locally (and with community outreach initiatives to help develop talent and encourage young people to do something productive), and of course, using Blender + Open Source software to power all of this. The result would've been along the lines of Moana (and/or maybe stuff like Kung Fu Panda 2 and Secret of Kells / Song of the Sea)

Personally, I really liked the film.
* There were some really powerful and emotionally charged moments in this film. It also happens that these had some of my favourite music from the film:  (Warning Spoilers:)
- "I Am Moana (Song of the Ancestors)" - This is probably my favourite moment and song in the film. It is really epic and juicy harmonically...

- "Tala's Deathbed" -  'Nuff said. This was a really sad + poignant moment in the film. The grandma was awesome!

- "We Know the Way" - The polynesian chanting at the start is really epic, and the song in general is quite catchy.

- "An Innocent Warrior" - Aka the song that plays during the scene when baby Moana plays with the sea in a "Moses-like" moment. This song + scene can be seen in the first International Trailer - the one with the Japanese bits. (It turns out that it's practically based off an old Te Vaka song, "Loimata e maligi", which is a really beautiful song.)

- "Toe Feiloa" - Another one from the climax of the film. The Polynesian choral stuff here is really nice to listen to. Combined with what happens on screen at that point, it's all quite special.

-  "The Ocean Chose You" - Rounding up this list, this was another one of the really nice moments from the film

- (While people have been quite enthused about "You're Welcome" and "Shiny", personally, they were only so-so IMO. The second one of these in particular was really "meh")

* Although some people criticised how it was relatively formulaic, straightforward, and/or didn't seem to go far enough in places, I'd like to say that at least it managed to keep my interest throughout. Though it may be heresay to some people, I can't say that same about some other well-rated films. For example, IMO, Brad Bird's films often suffer from a bit of a "midway sag", where they suddenly lose their momentum about halfway through: Ratatouille (e.g. it seems to go off the rails for a bit after Linguini and Colette get together, and Remy gets kicked out), Incredibles (e.g. after the family is captured), Mission Impossible #? (e.g. after they're discovered the by baddies, and they hide out in some desert hole or something). At the very least, this didn't happen here, so in my books, that's something good going for it.

* I LOVE what they did with the credits.
- For the first half, they used a black background, and then filled half the screen with a large closeup of some of the props from the film. It was really beautiful seeing those props up close like that, with all the fine details they'd put into those showing. (And to see them on a large screen that like that... wow!)

- I was amused to see that they had a credit labelled, "Caffination" with one guy's name there. Yay to their barista!

- It was interesting to see Brian Whited's name in the Hair Sim development team. For those who don't know/remember, Brian was the guy responsible for Meander (he will recieve a technical Oscar for his work in February this year)

* Speaking of Meander, the short playing before the film, "Inner Workings" is a really fun little piece, with echoes of Inside Out and Alike. I particular like the running gag about his brain's morose thoughts about the risks of certain actions (*spoiler alert* early death, - amen amen... lol)