As promised in my commit log for Triangle-Mesh Collision Shapes, here is a brief guide (with demonstrative videos) on choosing collision shapes when working with Rigid Body simulations.

A few bugs showed up (and most but not all were fixed) during the course of the video recording process, so the initial commit of this functionality may not be sufficient to reproduce these videos.


Defaults:
By default, all newly added Rigid Bodies have their collision shape type set to 'Convex Hull'. Most of the time, this allows you to quickly and easily setup up simulations and have them work as you expect. However, in some cases, this may not be the case, as we'll see... 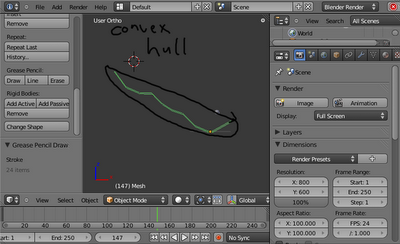 This example shows one of the situations where the default "Convex Hull" is inappropriate. As illustrated using Grease Pencil and seen from the motion of the sphere, the convex hull used as the collision shape provides a very crude approximation of the true shape of the ramp. Convex hulls are like forming a surface/envelope over the outside of a shape with shrinkwrap, which means that bowl-like areas (concave regions) are not accurately represented for collision detection. Here the ramp exhibits concave-tendencies, so in this case, you need to change the collision shape to mesh instead of the default convex hulls. 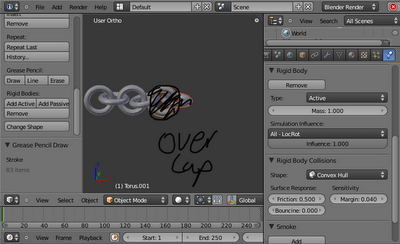 This example shows another one of the situations where the default "Convex Hull" is inappropriate. Once again, the convex hull makes an envelope which is too crude of an approximation to the actual collision surface. However, in this case, this is because the convex hulls only consider the outer (extremes of the) surfaces. This means that the holes in the middle get ignored or are non-existent from Bullet's POV. Consequently, the shapes will appear to have illegally collided, and strong repulsion forces will be assigned to all parts of the chain to force them apart, causing the explosion result.

In general, this is not the desired result (though you now also know how to create the "Houdini's Rings" effect), so we need to use Mesh collision shapes here once again. 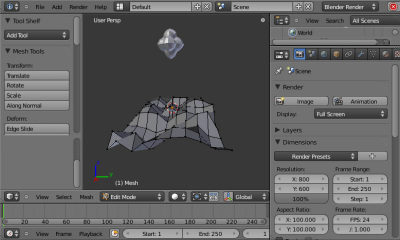 This demonstration examines the question: Why don't we just use 'Mesh' all the time instead?

Therefore, the recommended/only solution is to make the plane a Mesh, and the object a convex hull.


Other Things You Should Consider:
Hopefully now that it's clear when to use Convex Hulls and when to use Meshes, let's consider the remaining cases of when you might consider using other collision shapes at all. After all, left to its own devices, Blender will give you a good default of Convex Hulls, which takes care of most situations.

The main reason you may want to consider using the other types is if your objects can be very well approximated by one of the existing primitives. For example, for roughly spherical bodies, Sphere would be more efficient than a Convex Hull sphere mesh. The same goes for floor planes or boxes or bricks, by using the Box shape.

This is really handy to keep in mind when dealing with larger sims that are starting to bog down your computer.


Hopefully this has been an informative post. Until next time,
Adios!
Posted by Aligorith at 12:44 AM