I've just been doing a bit of a bug-squash sprint tonight, dealing to a few reported issues which have lingered in this branch for a while. If you've been finding any bugz in particular, please test with a recent version, before reporting on here.


Also, been looking a bit into whether various tools are working correctly. For instance, I think I've finally verified that one of my first tests for Effectors was actually not such a great test case. The modified version can be found here. 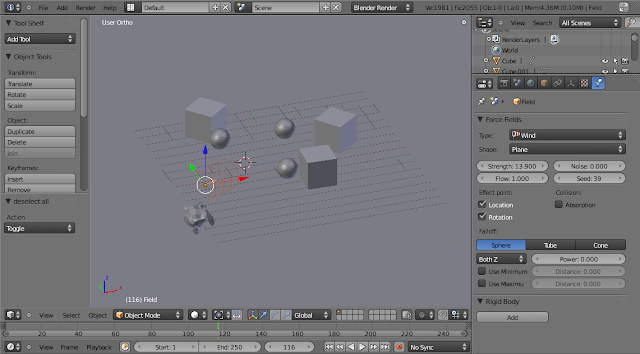 In the original version, there were only 3 cubes, the floor plane, and the wind effector. As it turns out, the wind strength in the original was far too low to do anything, and the fact that the cubes and floor plane had the default friction values meant that they could not slide around at all (as hoped). So, in this updated version, I've boosted the wind strength (I'm not sure how this maps to real-world values, but it's probably getting quite strong) and made the friction on the other objects nearly no-existent (they values they have give them very little static friction, which is practically 0. In real-world terms, static friction = 0 is a perfectly slippery surface such as ice, so we've now got ice-cubes on a skating rink here :)

Anyways, this should prove an interesting base for some playing around. Have fun with it!


When I get around to it (desperately hoping that working on assignments for Uni courses won't end up digging into this time), I'm currently planning on setting up some operators to build up brick walls and such, already set up with settings to let them work out of the box. Perhaps I'll firstly need to add a few more triggering options first before I do that, but we'll see how it goes. Fingers crossed!
Posted by Aligorith at 12:40 AM