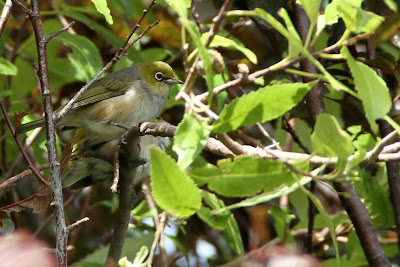 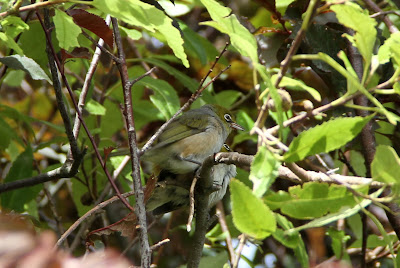 "Cuddle Class"
IMO, Air New Zealand should seriously consider making pairs of these cuties the poster-birds of their new seating designs on their long-haul flights (one of which has the nickname "Cuddle Class").

Anyways, I didn't see the second bird as I stood snapping away as it was obscured by the first but also because they are just so small! I guess this is a good embodiment of the saying, "[getting] two birds with one stone" ;)

The bottlebrush+silvereye season was a real fizzer this year, with no really standout shots coming out of those encounters (the first one I posted from the start of that turns out to be the most detailed shot I've gotten of one to date still, but sadly I badly blotched the white balance while shooting through net curtains).

Then again, it was really difficult to have done so, with the "season" lasting just 3 short days, but the visitors only coming for less than a minute at a time, sometimes in the morning but otherwise at varying times in the afternoon, and the weather not playing nice (most of the time the sunlight was overly harsh + strong, but another time it was getting late and with heavy cloud cover). Furthermore, it turns out that I had a lot more "really attractive" competitors, many of which were very large bottlebrush trees absolutely covered in bright red bundles of flowers.

This was depressing. No birds, no photos.

Having given up on trying to get a shot of them dining on the bush outside my window, I turned to other projects for a while.

Then, a week or two ago, I started to see heaps of blackbirds swarming to the tree in the neighbour's garden, where for months I'd seen some rather juicy looking berries hanging there, but no interested takers (instead, they went on "patrol" down my driveway everyday, checking out the strawberries - for the record, they managed to fully eat two from early crops). Here are the berries from a last month... 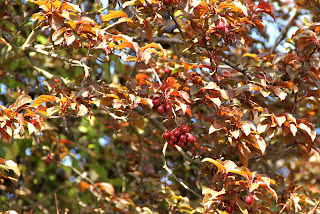 From my readings on the habits of the silvereyes, I figured that they would be interested in the berries (or any sweet fruit for that matter). Indeed I was proven correct last weekend, when I saw one hopping around the branches, though that time it took me too long to grab the camera.

Fast forward to today. While helping to grab the clothes from the line out back, as luck would have it, I saw a silvereye hopping around the tree again. Racing back into the house, I grabbed the camera, went back out while setting settings as I half walked/ran, spotted the bird still in the tree (woot! Tracking is tricky, and luck also comes into this I think) and set about taking photos to only find I'd forgotten to take off the blasted lens cap again.

With that obstacle out of the way, I set about shooting as many shots as possible (i.e. high-speed burst) with the camera pointed squarely at the birdie I was tracking. Now, I figured that I'd have to crop (must...get..."proper"...telephoto...lens!) so framing centered wasn't too bad. As I started shooting, I found that unlike previously, the birdie wasn't hopping around much, but was instead swivelling around on its perch a lot (the reason for that only becoming evident when reviewing the shots above). For example, one of those shots was... 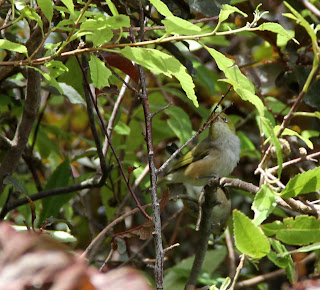 This is slightly OOF (I think AF caught the branch in front). There were a few others where it had it's back turned to me which I deleted in-camera before seeing the second bird, so it's likely that I missed something really interesting :(

But the real lesson to take away from this shoot was that actually it's much easier shooting them when they're sitting far up in a tree, cuddling up (which is in fact an example of interactions between them that I'd been interested in trying to capture if only I could get a decent shot of one), than when they're hopping about right outside your window (with potential for clearer feather detail) with interesting props.

And to finish off with one last shot (similar to the first one) but yet different: 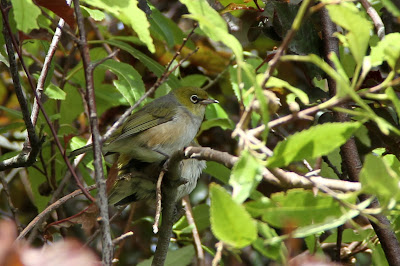 Slightly different crop and this one appears a bit OOF (the background bird's feathers are sharper IMO) though I liked the pose here much more.

Anyways, Season's Greetings to All, and To All, Goodnight :)
Posted by Aligorith at 6:37 PM