Some Terminology First
I'll be referring to the: 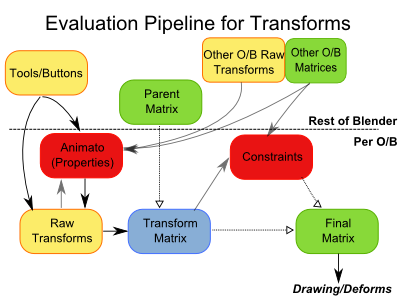 You'll also want to be familiar with Blender's Evaluation Pipeline and the idea of "matrices" (you don't need to understand all the finer points of operations,etc. on them though). See this post to refresh your memory if you feel the need :)

So how then do "Space Conversions" fit into this system?

"Space Conversions" simply mean that a matrix has the effects of some factor, be it some parent relationship, or restpose frame of reference, etc. added or removed from itself so that the resultant matrix contains or doesn't contain these factors. This is useful so that factors can be ignored while performing some operations and then put back later, thus filtering the transforms that are taken into account.

So, the way that these conversions fit in is that they are performed before a matrix is used (i.e. usually to remove some effects), the constraint is then let loose on these matrices, and the reverse (or 'inverse') conversions are performed to reapply (or unapply) any effects that the initial conversion applied.

BTW, one 'easy' way to think about these spaces is to concentrate only on the locations of the Objects/Bones involved. To make things simple, let's just think of them as dots.

Now, suppose we draw one such dot on a piece of glass, and then another one at one corner. The second dot you drew is the origin for the "local" space for the dot you drew.

Space conversions therefore are like saying which glass plate you'd like to look at the dots from.
---

Posted by Aligorith at 1:01 AM