Today marks a new era in Blender development, with the first release of the 2.6 series. 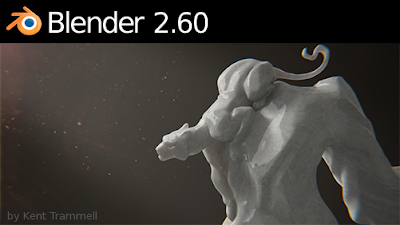 After a lengthy and tortuous period of bughunting and stabilisation following the initial 2.5 releases, we're finally getting back to a state of developing new features and improvements. It's great to see forward progress again, and hopefully as my own (increasingly busy) schedules allow, some cool new features too.


Regarding the splash screen for this release:
- Firstly, I'd like to congratulate everyone who entered the splash screen contest this time around. The quality of entries this time round has increased all round, with a large number of stunning entries submitted this time.
- It's interesting to note how many entries are finally starting to notice how a composition which focuses the subject on the RHS of the canvas to balance out the logo + text at the top left is starting to become a common trend in the splash screen entries. Personally, that's the way IMO things should have been going.
- Unfortunately, for the 3rd time in as many recent rounds, I have to say that I'm not that much of a fan of the winning entry as selected by the judges. No offense to the judges or the creator(s), but the one here was IMO a bit too plain (especially compared to some of the others, which I thought were visually stunning), and the dispersion effect overdone and quite irritating. Then again, it is still in a class above *that* chameleon from 2.57.


My favourites in particular:

Posted by Aligorith at 1:10 PM