Recently, my uncle sent us a link to a retro Hong Kong commercial from the 80's that apparently my Grandpa had featured in (at 00:20). 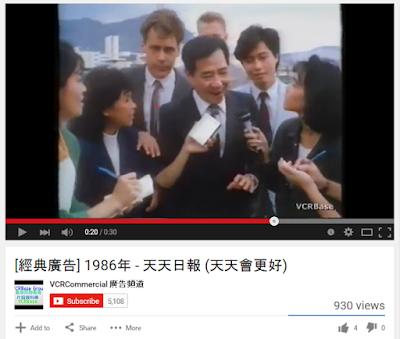 Unfortunately, I never really got to know my grandpa, as he died when I was 3 or 4 from lung cancer (PSA: If anyone is still a smoker, please give it up for the sake of your family!)... As a result, I only really got to meet him once (and it would've only been for a few hours - 1-3 hours) back in 1993, at the hospital/hospice where he was already quite ill.

This ad was for a local HK newspaper. From what I gather, the story of how grandpa ended up being in this commercial (he apparently also appeared in another one for some brand of whisky or something like that IIRC) was that he was walking down the street one day when the production crew spotted him and asked him to be in their commercial as he was quite a snappy dresser (*) and he looked the part!  (As can be seen from the screenshot above, the brief shot where he appears is a bit like one of those news clips where the media are flocking after Mr Li Ka Shing - i.e. Mr super rich guy  ;)

(*) Apparently he also quite liked ballroom dancing, and was also quite good at fixing various mechanical things (in particular clocks and watches, but also various electronics including toasters, etc.)  which he would take apart, clean/fix, and reassemble.

It's perhaps not that well known, but personally I do quite like watching ads - especially retro ones, and foreign-made ones. Yes, I DO use an ad-blocker in my browser, and I DO have banner blindness even when looking at print media (i.e. I've become so adept at ignoring ads in newspapers that I don't even see them/realise that I'd just glossed over ads...). However, that's because those are IMO the "bad" (and generally low-quality/annoying stuff, that's trying to push stuff on you, or is getting in the way). Good quality "cinematic" ads (especially those that tell a story of sorts, or have particularly memorable imagery) are another matter.  (Clever and/or well executed campaigns on the backs of busses are also good - the closeup of McDonalds fries currently roaming the streets is a particular favourite of mine)

Since my days at school, I've always found that watching retro ads is quite entertaining. In fact, there are times when they are more interesting to watch than much of the stuff that can be found on any TV channel most days of the week these days. (If you're in the TV industry right now, I guess that there is quite a damning assessment... When someone finds watching ads... ads! - from a bygone era no less (and  the things that many would claim are the bane of their existence while watching a favourite show), to be more entertaining to watch... then they must really be doing something wrong.

Indeed, I always recall how nearly everyone would always perk up when there would be an ad-break in one of the videos being shown in class (NB: this was still in the era of VCR's, where teachers would often record documentaries off the TV for use in class - often still using those over a decade later!) and demand and beg to sit through the ads. This would pay off when one of those good old favourites would pop up: maybe it was an appearance from the Watti's spaghetti monster, or perhaps the Mainland Chuck n Dale characters, or the Mainland "good things take time" fishing grandpas, or maybe even one of the Air New Zealand ads of old with the haunting rendition of Pokarekareana matched to images of the natural beauty of NZ, or maybe even the "Goldstein" series of ads for ASB that ran for over a decade. (The fact that there are Youtube channels springing up all over the place with old commercials is a testament to the interest in these things out there).

In this sense, IMO good quality ads serve an important role in the cultural landscape that shape our collective memory of what it means to have lived in a particular place at a particular time.

Watching retro ads is like opening a time capsule back in time, to see "how we were" or "what things were like back then". Meanwhile, foreign ads can be quite entertaining. First, there's the novelty factor of having a different style of presentation to what you're used to seeing (i.e. generally for NZ vs HK ads - as you should've guessed by now, I am a massive fan of watching HK ads... it's one of the things I love doing in my hotel rooms at night before bed btw - you've got ads that are generally much more vibrant and colourful and overall entertaining in HK). Then, there's also the whole "I have no idea what they're saying, but it doesn't matter... this is still so much fun anyway!" thing. And finally, there's the curiosity or "ahh.. so that's what ads are like in other cultures" thing.

So, imagine what fun occurs when you come across retro + foreign ads! hehehe
Posted by Aligorith at 12:34 AM