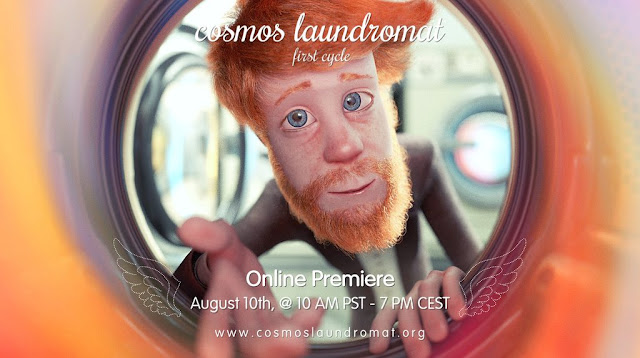 The end results are absolutely stunning! In particular, the polish and attention to detail was very well done.

Favourite Shots - Overall
* Victor removing the rope and putting on the timer -  As I've said in an earlier post, well done to Hjalti for animating this amazing shot. The expressions and reactions of Franck as the timer is tightened around his neck are awesome.

* The laundromat scene, particularly the transition from the jungle world - That tornado/wormhole transition is really awesome, especially with that cool sounding wooshing sound.

* The closeup of Victor's watch - When combined with the sound effects and the cut to Franck's timer (nice to see that they had the timer actually moving in most of the other shots, at least in the ones where it's quite obvious) were nicely executed, and formed a nice connection showing how these were linked. In particular, the ticking sounds really helped sell this plot point.


Favourite Shots - Overall + Awesome Lighting
* Top-down shot of Franck looking up at the tornado - In particular, I love the the lighting in this shot, and Franck's surprised expression in this shot! If I had to pick a single favourite image from the short, this would be it! This would make a nice poster on the wall :)

* Victor arms outstretched with the flock behind him, facing the tornado - The epic backlit lighting here! Aaaaaahhh! Aaaaaahhh!

* The last closeup shot of Victor's eyes before switching to Franck's eyes - Again, this would make an awesome poster.

Shots with Great Animation
* Franck's eyes as he considers the rope and the ocean (x2) - These shots were really nicely done, and IMO did a great job at selling the character's thought process. Really, really nice stuff here :)

* HheHheHheHector! - Love the jitter/shake in the face as he says this

* Pushing the log towards the cliff - I like the way how Franck first tries to push with his snout and misses, before deciding to use his head. Also, the way the log behaves as he's pushing it.

* Loading the cassette - Although it goes by in a flash, anyone who's seen Hjalti's screencast of the process for animating this would appreciate just how much work needs to go into making something like this. Again, awesome work dude :D

* The tremble in the front-left leg in the very first shot - This was a nice touch, and very cool to see for the first time (as it was masked by the low framerate of the Youtube streaming)


Environments
* Overall, very nice looking :D   It was lovely to see those rolling hills covered in grass, with the glistening ocean in the distance, and moody skies. In particular, the shot where Franck passes the flock is really nice. (For some reason though, I always feel that that shot is inverted... composition wise, it just doesn't "feel" right to me)

* Regarding the "whole island" shot - While the sound effects really sell the effect of being on this barren island in the middle of a raging sea with strong winds, etc.. the visuals here didn't seem to match. Yes, some of the shots around the cliff with the sea in the background looked awesome and worked well for this. But, apart from the sea foam on the front side of the ocean in this shot, the sea overall looked far too tame/calm for the kinds of sea-noise we were hearing. I'd have expected some more white-caps and turbulent waves buffeting the island, instead of just the small regular ripples were got

General Comments
* While I didn't really like the camera shake when I saw it in most of the during-production clips, it seemed less pronounced in the final film. For some reason, what was there seemed acceptable/toned down from some of the craziness I was seeing earlier. I'm still not a fan of camera shake in general, but it's ok-ish in what's been released.

* The hanging scene at the start - TBH, I'm still not a fan of it. Not so much the content, but rather the fact that it's hard to tell what's going on, or why.

* The "IIII knewit" bit was nice. I was surprised to see/hear it, since I hadn't noticed it in earlier edits before

* Was the "fidgeting with the timer while Victor walks away" cut/toned town? (The current shot is still nice though)

EDIT: Some additional comments after showing it to Mum

* She really liked Victor's red hair - very beautiful and captivating (to be point of stealing the scene at times). She also liked a shot where Victor's out-of-focus sleeve was in the foreground.

* She was surprised that the grass and branch/log were CG ("the lichen looked so real"), and really liked the clouds as the storm was building up. She also found that the wool looked very real as well (though not very pretty).

* Story-wise, she managed to get most of the story (he got reincarnated / what an interesting concept), but had a hard time understanding the initial hanging scene ("I did not know what to expect... what was he doing?... was it another sheep?... did he die?... where was he?... Trying to understand what was going on made it harder to focus on the rest of the story") even after watching it again.

* She thought Franck's eyes were well done (why were they different colours? ahh, so that you know it's him in the next life) but that Victor's were too "clear" looking

* Mum also liked the shots as the tornado started to build up - Victor's expression as he looked up waiting for the clouds to gather, the clouds swirling around, Franck looking up at the tornado, the Victor + flock
Posted by Aligorith at 10:53 AM