Here is the second part of my notes on the Siggraph Asia conference. 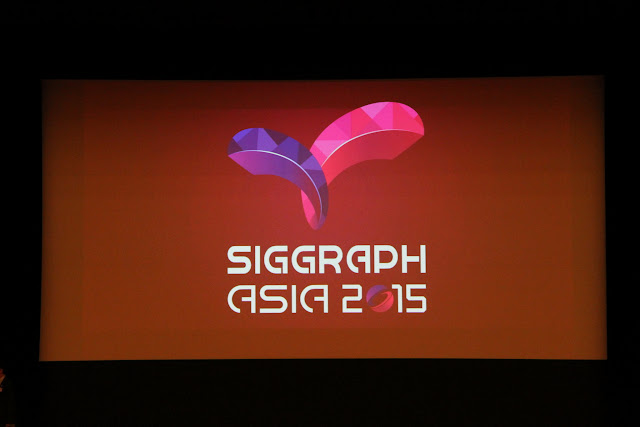 
Technical Briefs Session - Animation
I presented as part of the technical briefs session on animation.

There were two Blender sightings during this session:
1) The paper on sound effects was done using the Blender Game Engine (and no doubt, the Audaspace library was probably involved in that too)

2) Blender was featured on the dock of one of the other presenters (IIRC it was motion manifolds one, but I'm not sure now)

What follows are my rough notes, transcribed direct from my notebook.

I attended the Wednesday evening session (from 7pm - 9pm). When planning my schedule, I chose this session so that there'd still be time to attend all the other sessions/events I wanted to head to AND get some sightseeing in (i.e. for things that are best done during daylight hours), so attending the evening session was an obvious choice. What was less anticipated though was the challenge of figuring out what to do for dinner, since you'd obviously be needing to do this at odd hours, while being conscious of not taking too long.

In the end, things worked out such that we headed out to Sannomiya for a quick dinner (Pasta de Pasta) before returning just in time (literally with just 2-3 minutes left before the lights dimmed, and doors closed) to the hotel via the shuttle, and dashing across the courtyard. Throwing a bit of a spanner into the works was that Mum & Dad had been spending the afternoon out at Kobe Uni meeting an academic with similar interests to Dad, and checking out their labs, thus delaying our departure out to Sannomiya (and consequently ending up on a VERY jam packed shuttle, where I got my first taste of a Japanese engineering innovation - fold out seats in the aisle, to fit extra passengers!)  Not helping things was that I had gone for a little walk around the block around Port Island to investigate the surroundings a bit, but had subsequently gotten a bit knackered for doing it... (Hah! Serves me right for trying... But, I got pretty autumn photos to show for it, along with getting to investigate the weird large-domed building that looks a bit like a stadium or sorts...)

Overall Impressions of the Show
Truth be told, my initial reaction watching the show (at least after the first 3-5 films) was mostly a reaction of: "blegh".  However, checking my notes of what was awesome and what was crap (made in the hotel lobby following the screening, as I frantically tried to scribble down my "still-fresh" impressions of everything), I realised that overall, the show was actually good. It's just that they showed all the crap stuff first, before we got to the actual gems.

Knowing what I know now about the films they included, I would have gone for actually having one or two of the good ones come up earlier (maybe even opening the show).

About the CAF USB Stick
When registering for the conference, I also bought the CAF USB stick they were offering. I figured - I might as well get the whole package to get a taste for what all the different bits are like, so I'll know what to focus on next time ;)

Well, TBH, I have to say that overall, I'm disappointed with this.
1) They didn't have it ready for the conference, so they had to mail them out afterwards. Shipping however took 10 days (from when they sent out their email). I understand it's getting sent from Canada, but 10 whole days?!    (It didn't help that there had been a few weird coincidences recently, what with our front gate being left open one day, and what we suspect was one of the new neighbours having taken some of our bank statements (leading to the address being cleared from Dad's account! It literally said: "No Address")

2) The final product was a measly 4 GB stick (!), which subsequently contained just a very small number of all the clips/films shown as part of the CAF. Basically, it wasn't even a "highlights collection" (as not all the prizewinners were present), and it wasn't a copy of all the films in any one session (it was mostly Electronic Theatre, along with a few from some of the other animated shorts/student sections, and one scientific viz project).

Awesome Shorts
First, the really awesome stuff that I highly recommend seeing if you manage to get hold of them. Sadly, most of these are not available online in full, and not really in the form that I saw them in. But, if and when they do appear, go check them out!

* Natural Attraction  - (Award Winner) This had some absolutely stunning visuals of nature scenes - specifically, the violence and beauty of planet earth. All the more impressive considering it was a student project, and IIRC mostly done by a single guy.

* Jazz Orgie - This short (~1 min long) little abstract 2D piece set to a short piece of sax music is awesomely creative. Great concept and execution. It's a bit like the "tasting" shots in Ratatouille, but strung out into a little flowing narrative.   (The online version seems a bit different to the one we saw)

* Electofly - A really funny concept, with a great ending. Animated doodles of a fly come to life on the dirty white tiles of a bathroom.    (Spoiler: Never has a royal flush been so satisfying ;)

* Some Thing - Really funny and heartwarming little short about a little mountain who gets bullied by 3 "big" mountains. Awesome story/concept, with nice a and unique hand-drawn style. Big crowd pleaser.

* Tokyo Cosmo - Cute!  A lonely Japanese girl's life in her apartment. A dream sequence which is triggered by an element familiar to fans of Cosmos Laundromat, leading to a cute flying pig, and encounter with a "Godzilla-esque" cockroach are highlights of this film (which you'll find online).  (I love how her real life and the fantasy elements are blended together; also love how it really captures the feel of the place). Another crowd pleaser.

* Afternoon Class - (Award Winner)  Creative, Funny, Insanely Interesting. The bendy 2D animation on show here was quite a sight to behold (especially a wacky inverted-with-rainbow-coloured-lines sequence in the middle), as was the hillarious ending. A definite crowd pleaser.

Nice (but confusing)
There were also a few shorts which were nice to look at (visually), but were ultimately a bit confusing to follow entirely.

* Chase Me - Basically, a stop-motion hybrid music video. There were some really nice visuals on show here (especially that spiky tsunami effect), but the ending was confusing

* Blue Eyes - Interesting story, but ultimately a bit creepy (who wouldn't be creeped out by a story starring a big eyed dancing doll, who gets imprisoned by a deranged old lady seeking a companion to keep her company, who gets killed by a seagull dropping a brick to save the doll - a heavy drinking kind of lass)

* Duo - Really nice 2D animation (Gobelins) about a bickering pair of gymnasts. The 2D animation was really well done - nicely executed, and looking like "concept art in motion". However, I'm not sure I got the ending... it was somewhat "ambiguous"

Ok
There were a few others with some good stuff going on, with interesting execution and/or story. However, these weren't really to my taste.

* L'Aid - Funny commentary and portrait on family life in a middle-eastern country, and done in a NPR (Freestyle-like) style. The animation though was a bit lacking in bits (it was quite awkward to watch.  The weirdness here came from the sheep + alien lines, which amounted to some really bizzare crap.

* Choc Darwin - WTF was that all about?!  A live action + stop motion + cutout puppets mashup of weird stuff, and wacky "Main in Moon" (complete with rocket in eye) reference. It's themes included Evolution, God, Darwin, and Human Madness.   An intriguing watch (if you can force yourself to hang on through it all), but not something I'd really recommend watching

* Leonardo - This short which opened the show was about a youthful Leonardo da Vinci going back in time to the stoneage, and getting seduced by the cavewoman wife (a real nasty piece of work that one is) of a genius inventor. Funny story, though the execution was a bit weird/ugly.

* Escargore - A short film by a NZ film student (woohoo!) by the name of Olliver something  (for some reason, this name seemed familiar to me; dunno why though).  It's a really funny concept, with lots of dark humour, executed using CG + Live backgrounds. However, the subject matter was really quite violent and gory, which is why it ended up in "OK" territory.

Crap
And then, there were a bunch of films that I disliked, or outright hated. A pity too that most of these were near the start of the show, and just about made me walk out of the theatre after only 30 minutes...

* Splintertime - A confusing, pretentious pile of steaming crap. A bunch of ugly/wacky looking zombie puppets get shoved into a van driven by a psychotic zombie nurse, who periodically gets out of the van to spastically dance, while weird stuff flies all around the screen, set to a background of heavy metal.  This was a really awful film. Absolutely hated it.  And it's made by Autour de Minuit

* Witcher - Put simply, this was absolutely disgusting. Really nasty stuff to look at

* Chaud Lapin - Gory and violent, despite being populated by furries. It was hard to tell who was male/female in that relationship though (unless they were actually "something elses")


Keynote - Ronnie del Carmen
* Showed short film of his childhood - Rain, Animatic Style, with basic music, but with quite deep emotional impact (especially with the live narration)
* Showed interesting carricatures of the Inside Out directors (looking like two sausage-slugs on a barbeque)
Posted by Aligorith at 5:00 AM