It's time to dust off the cobwebs and post an update! As you'll probably have noticed from the lack of activity here (and also in the Blender commit logs), I've been rather busy for the past few months </understatement of the year> ;)

Well, during the past 4-5 months, I've been bunkered down in my home office, pulling crazy hours 6.5 days of the week writing up my PhD thesis. 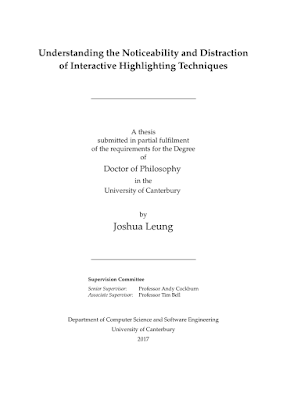 And as of last night, after 4 long years, I've finally submitted it! Woohoo!


I'm really glad to finally have this out of the way at last! It's taken a lot of work getting to this point (e.g. I ended up rewriting/writing-from-scratch about 6-7/10 chapters, spanning about 120-160 pages or so, in about 6 weeks in April). I'll also admit that there have been times (especially in the past 2 years) when I've wondered whether it was all worth it and/or whether I should just quit and work on easier and + more-fun stuff. 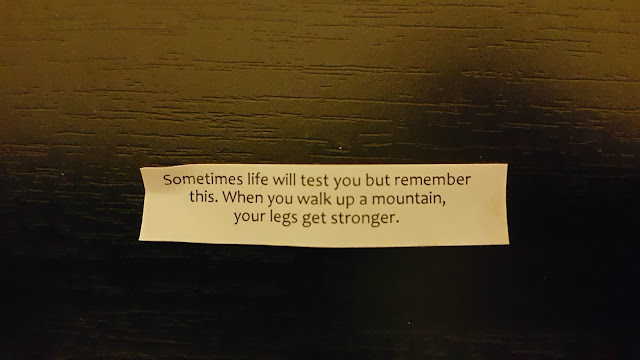 My ominous fortune-cookie (Christmas 2016). Was it warning about the past month?

The last month in particular has been particularly torrid: a minor car crash, driving to/from the airport in a heavy rain/snow storm at night (with the road markings impossible to see), running out of hot water in the middle of a shower on several nights ("load shedding" 'coz the Government's too cheap to build a more powerful network, ARGH!),  a leaking roof, an eye infection, and to cap it all off, an internet outage at home the past few days (*)

(*) It was apparently non-existent, until you pressed the ISP's support-staff (all 3-4 daisy-chained layers of them) hard enough, at which point they finally admitted there was an outage in our area... no, wait, no other customers are affected... it's just on our connection, and it's not scheduled to be fixed till "7pm on 31st July" (yep, like that specific, except my thesis is due by the 31st... argh!). Things are still not quite normal now, but at least it's kindof working most of time, vs completely inoperable!

There have been some bright spots in all this:
1) Team NZ winning back the America's Cup - I've been a long-time supporter of Team NZ, and still have fond memories of standing in front of the TV when the midday news announced that Team NZ had won the cup for the first time back in 1995. Since then, I've been followed each campaign with interest, from the successful 2000 defence (I've still got an old cap from that campaign in my cupboard), the disasterous 2003 defence/loss (the equipment failures that time were painful to watch... the spinnakers blowing out, the mast snapping in half, water leaking into the hull.... argh!), the unsuccessful 2007 campaign against Alingi (I remember sneakily trying to stay up to watch it on the TV in my room - "come on, just a little faster... argh", and having Mum come in and tell me off ;), that unbelieveable and cruel Oracle comeback from 8-1 down in 2013 (it's like WTF?! How can that happen?!), and finally this year's successful campaign!

Of course, there were the dramas -- like that dramatic capsize on that torrid-weather day that caused so much damage, and could have almost ended the campaign but for the heroic efforts of the shorecrew, who put the boat back into match-fit shape in 24-48 hours. Or perhaps the nail-biting challenger finals against Artemis, who looked pretty darned deadly at times.

(On a side note, I'll note that I didn't ended up watch the matches live this time. Apart from the fact that these were only broadcast on Sky (scummy pay tv operator), and were on at like 5am local time (though it wouldn't have been too much of a stretch to stay awake an extra hour, at the end of a long day), I've also found (tiny superstition) that I seem to jinx the teams I support by watching them live... e.g. on that capsize day, I was awake at 5am, poking around trying to find the live commentary feeds... haha :/

2) Musical Output-  As a kind of sanity valve (and "non-work" creative outlet), I've been putting together quite a bit of music (i.e. the recorded "Violin Layering" stuff, and the "composed" multi-instrument synthesizer stuff), averaging about 12 minutes of each per month, for about 2 hours or so of music playlists. The best part of all this is that it's served a dual purpose - apart from being a creative outlet, it's also been nice to just listen to my own stuff while working, in a strange kind of way ;)   I'm planning on posting these in the upcoming weeks, when I get around to it...

3) Seeing the Agent327 Barbershop short come out. Wow! Stunning work from everyone at the Blender Institute/Animation Studio (blegh, what's with the identity crisis over there? :P

4) Watching the amazing EEVEE demos coming out. Wow! There are some really stunning tests being done out there atm. To think that maybe we're about to start being able to render nice-looking stuff in decent times again (aka on the order of seconds, not hours and days) is amazing.

Speaking of Blender, I'd like to offer a deep heartfelt THANK YOU to everyone in the Blender community! Thank you for all your boundless positivity, energy, and inspiration. Thanks for being there when I needed a creative outlet to let off steam and recharge my depleted energy levels. Thanks also for reminding me what got me into Computer Science in the first place, and for reminding me what it felt like to a super passionate about working on a project, helping me recapture my missing-in-action productivity mojo. I'd particularly like to thank Daniel M. Lara (pepeland) for getting in touch at the right time and collaborating with me on Grease Pencil and Bendy Bones.

I'm probably going to take a few days off now to relax and recharge, before starting work on a few fun projects I've had backlogged for a while now. Stay tuned for more!
Posted by Aligorith at 4:03 PM