As a little warmup exercise for a video project I'm working on, I went ahead and modelled Mum and Dad's old oil column heater. Why a heater you may ask? Well, a few nights ago, I caught sight of the the heater's light casting a lovely red glow on the wall, nicely complementing the deep blue light coming from the windows in the darkened room, and thought to myself, "Hmm... I wonder if I could replicate this scene in Eevee..."

Of course, what's a story without a little drama ;)  The one snag in all of this is that it turns out I haven't actually modelled anything in over 2-3 years! Sure, there have been Grease Pencil tests/animations and an occasional quick test objects, but models meant to look like something in particular? Zilch  (IIRC, the last time I did a lot of modelling was on Dad's ebook promo video, which was eons ago...)   Furthermore, I've mostly focussed on organic stuff (i.e. characters), so modelling an hard-surface object was a nice little challenge.


So, naturally there was some rust to shake off. For example, things like:
* Where to start?
* Huh? Does it really look like that? (*double-checks reference snaps on phone*)
* What's the best way to start making holes and dents in the middle of a surface  (Answer: a combination of knife-project and extrude?
* How much can I now get away with with NGons?  (for context, the last time I did any serious modelling, NGons were still very far off in the future)
* How can I make the newfangled knife work? Why won't it cut the backside too (particularly annoying when trying to saw off the nose of a cone)?
* How much bevel do different edges need?
* Which menu was that tool located in again...

All things considered though, I think this turned out quite well overall. (It's probably best to not directly compare it against any reference though, as the proportions are most definitely out of whack) 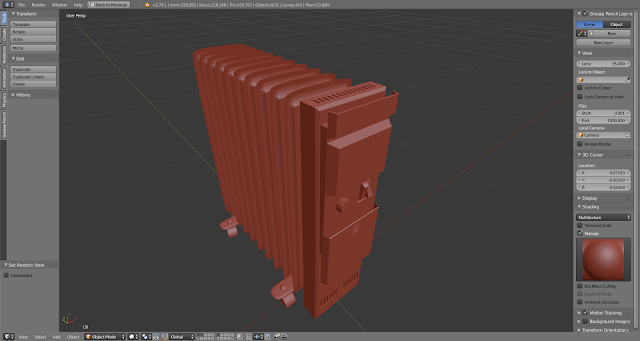 I realised quite quickly that the default material + lights were terrible for seeing things when modelling. A few matcap tests later, and I found one that did a good enough job (most of the time, except when dealing with axis-aligned planar details, in which case the view had to be constantly jiggled to catch the light shifts) 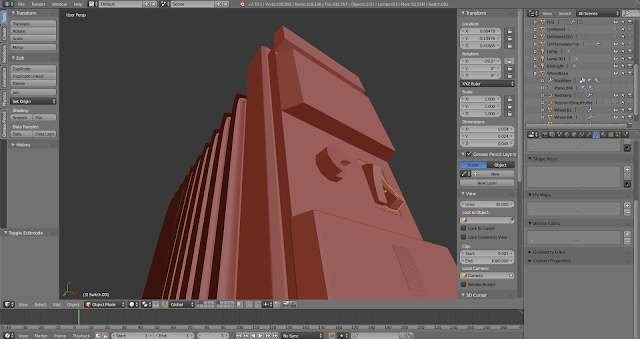 Closeup of some of the details added to the control panel. All of this is geometry (including those grip-strips on the lid). 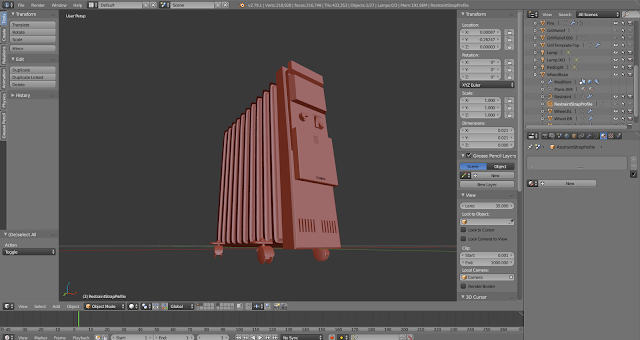 Cat-eyed view of the heater monster 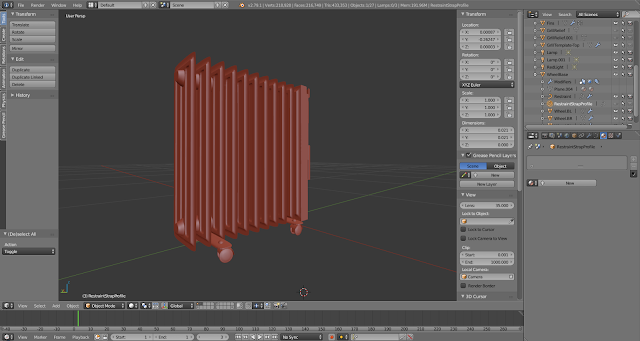 Rear-view - I know the panels don't quite look like this (the grooves apparently need to start above/below those cup-like protrusions, instead of going around/through them), but by the time I checked my references, I'd already made the dents (ugh! I'm not doing it that way again - loopcut + knife + extrude) and trying to edit the geometry was kinda tricky without distorting everything (subsurf loopy crazyspace weirdness be damned!) 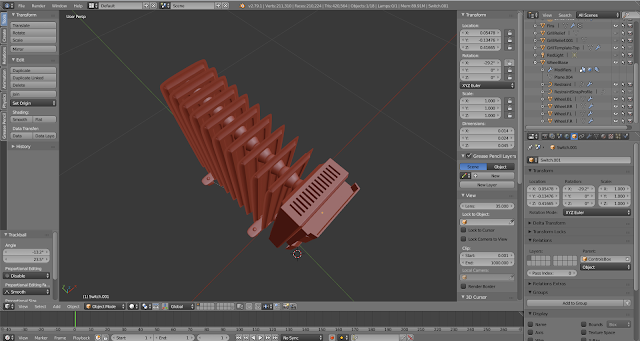 For vent slits, I took a different approach, generating an array of blocks for the slits, and using the knife-project to cut holes into the mesh. Unfortunately, the tool seems a bit fickle, as sometimes it would create "crazy geometry" (e.g. half of the slits would be cut correctly, and then the other half would be a mix of a giant triangle mixed with half of the slits). I found that adding a few edge loops closer to where the cuts should appear seemed to help it out a bit, but still, it still goofed a little in places. 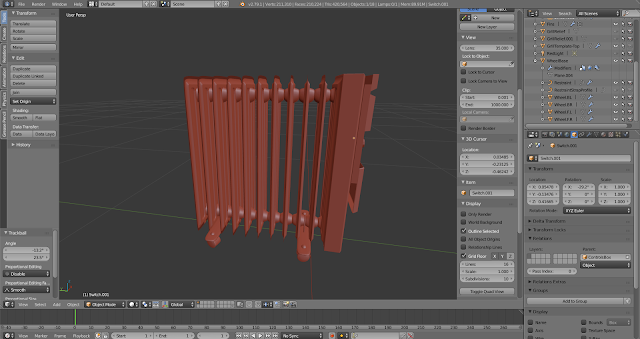 Side-view of the fins 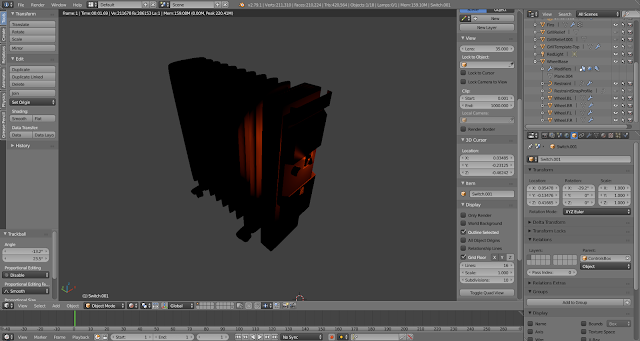 An early test of the glowing light. Apart from the fact that it illuminated the fins (bad), the effect was close to what I was going for. 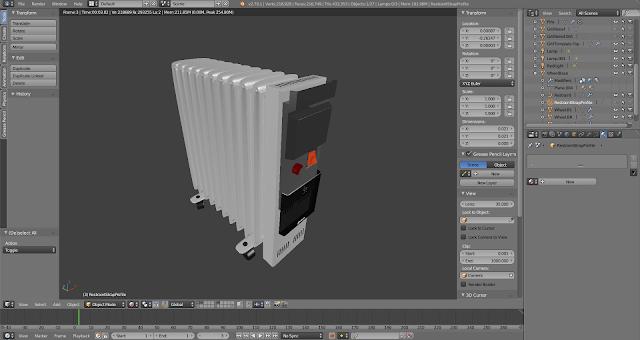 BTW, this isn't the first time I've tried to set up a scene featuring a heater in a darkened room ;)

One of my (old + unfinished) projects was to have been titled "Worshipping the Heater", and would've featured two darkened figures stretching out in front of a heater (one with arms raised high as if worshipping the sun-god, the other going down low like a cat stretching). That too was inspired by events in real-life, seen every morning (*cough* TG and SL *cough*).  I never finished this though, as I couldn't find the right way to frame the scene to make everything read well enough (i.e. to be able to realise that the heater - a gas heater in this case - was a heater, you'd need to see the glowing panels, but if you see the glowing panels, the poses of the people don't read too well).
Posted by Aligorith at 3:19 PM