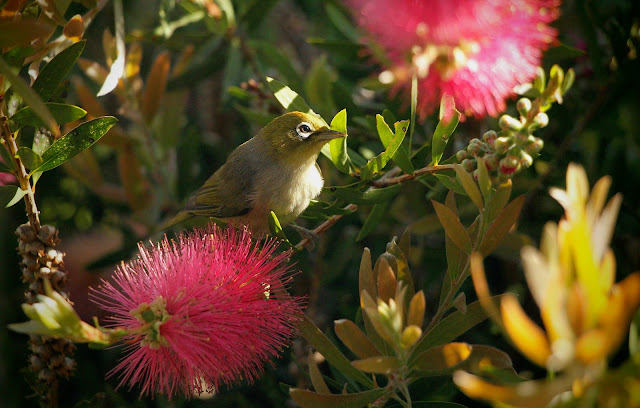 So, without further ado, here are some of my favourite shots from this year :) 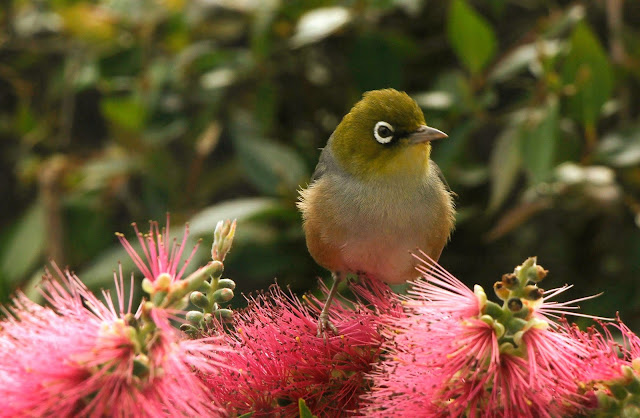 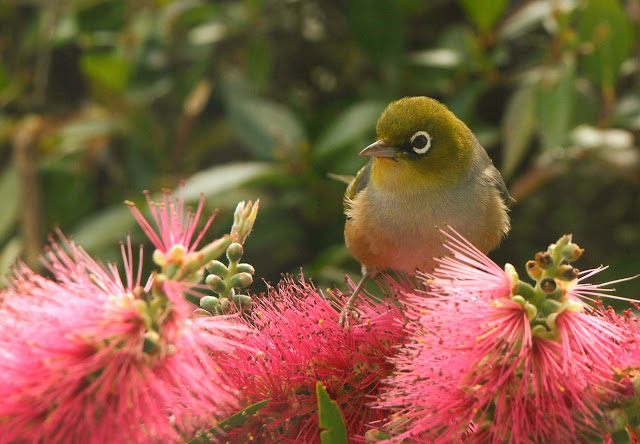 I took these shots of this cutie pie early in the first week. The first flowers to open up this year were a LOT closer to the window than in previous years (this bunch was within 30-50 cm, but some were opening up between 0-10 cm away from the window!  The only downside was that these were within the central window pane - i.e. right behind my monitor, making the ergonomics of getting a lens in there "challenging"). 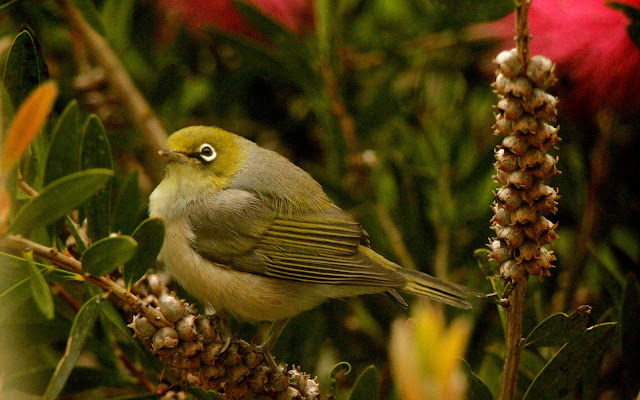 This fat boi may have been a juvenile - I'm not 100% sure, but there was a juvenile excitedly chattering away, and the only bird in sight was this one. 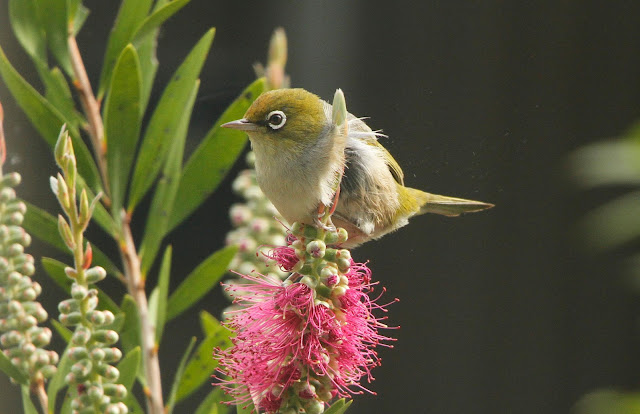 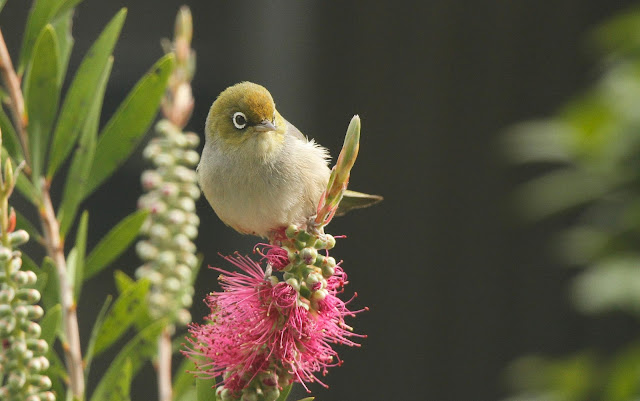 Pretty birdie on a stick 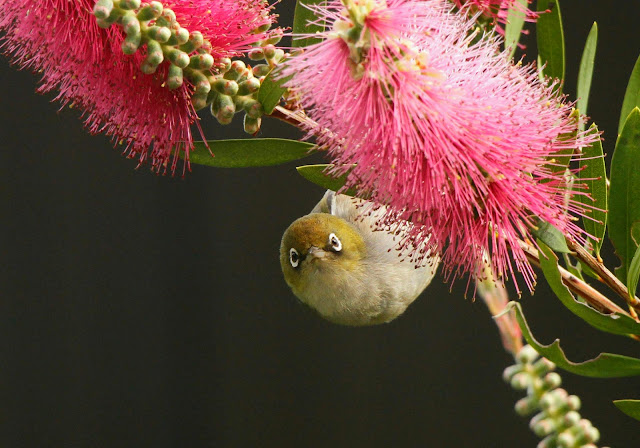 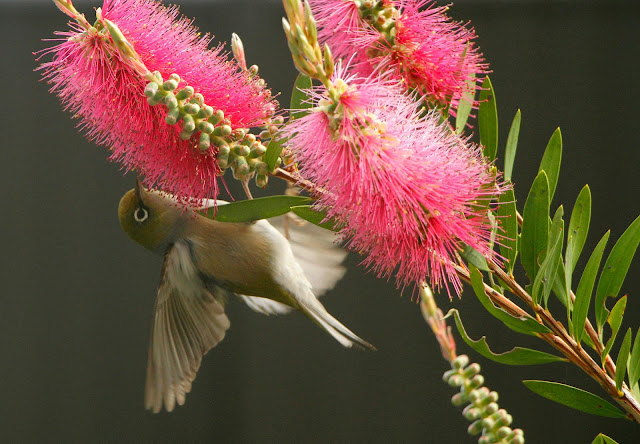 It's always a treat seeing the feats of gymnastics the silvereyes put on darting between branches and hanging from impossible perches.

For example, one night after work, there was a really strong easterly/noreasterly (seabreeze) blowing, just as 2-3 silvereyes were feasting on the bottlebrush. It was a super challenging but also super fun + rewarding little photoshoot trying to capture those 2-3 silvereyes as they flitted around the bottlebrush in a stiff breeze. The tallest branch was swaying violently back and forth (tracing a barf-inducing arc that was ~1m long at times), but yet, through this all they somehow just clung on and carried on calmly eating as if nothing was wrong. 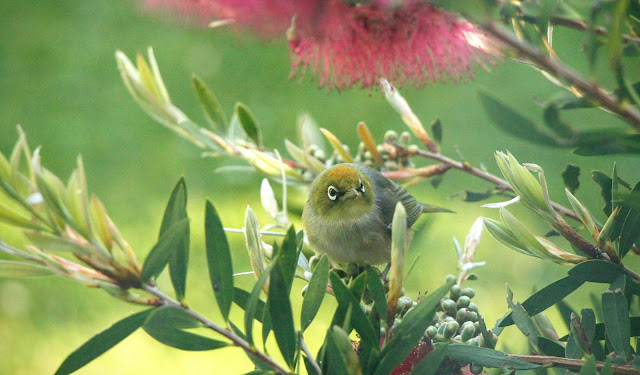 I love how this shot turned out with the pastel-ish colours. This was taken after they disappeared for a week - judging by the orange patches on some of their heads, I presume a giant flax had just started flowering the previous week, attracting all of them away... I haven't found the offending plant yet, but hopefully one of these years I will! 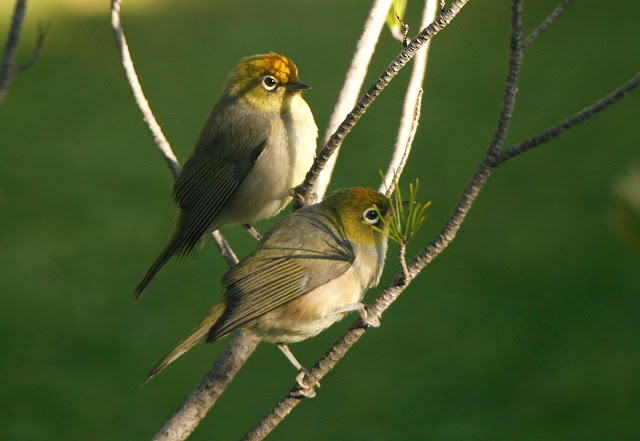 It wasn't until later in the season that multiple silvereyes started to arrive in small flocks. I caught this pair one morning before work (the first time after they disappeared for a week, and shortly after a cold snap overnight IIRC). In fact, there were often times when there were actually 3 (or maybe even 4) hopping around the bush at the same time, though I only really managed to catch 2 of them at a time. 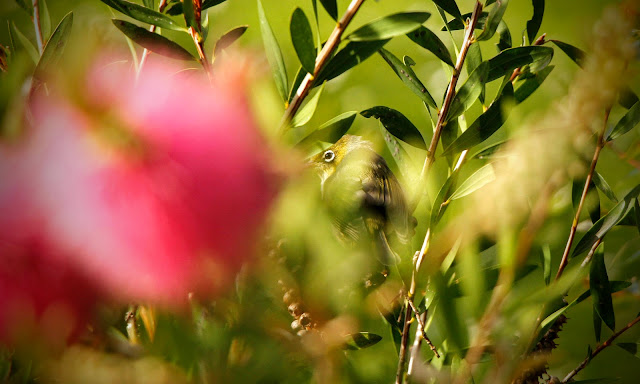 Spot the birdie!
(This one is best viewed larger)