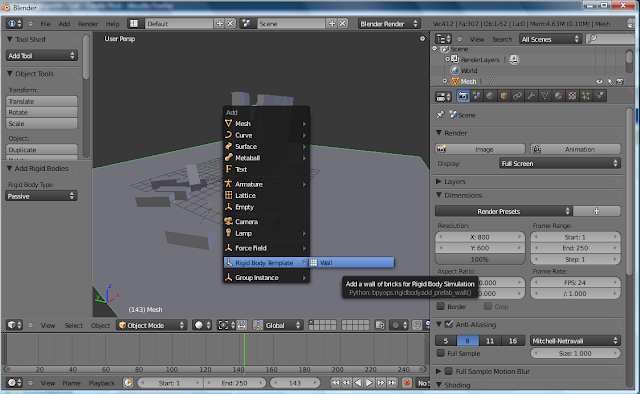 Templates can be accessed from the 'Add' menu (Shift-A)

Ultimately, the intention behind these is to allow you to quickly add a set commonly-used of Rigid Body setup to your scene. That is, setting up such a setup would otherwise be quite tedious, as you'd need to create several objects, or similar.

For now, only a single template is included, mainly as proof of concept and demonstration of how these can be created, but also fulfilling a bit of a functionality gap that we currently have for creating constructs like this.

So, without further ado, here are the screenshots: 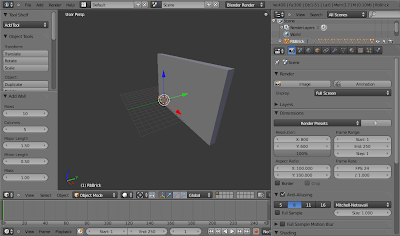 Immediately after running the operator. Note the tweakable settings. 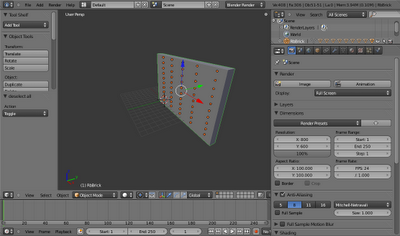 "See Mom, it's not just a solid block!" - All the bricks selected 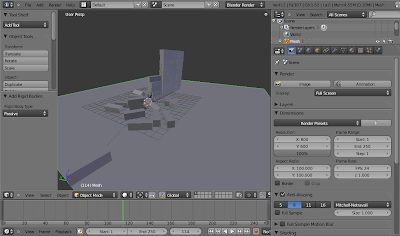 After running the simulation for a bit

Unfortunately, I haven't been able to work out yet what's causing the explosion at one end of the wall (and not the whole wall) when starting the simulation, so that's a bit of a rough edge that will need further investigation by curious souls.

Also, this version only allows walls to be perfectly aligned - each row is exactly stacked on top of each other - while more realistic walls will probably have some alternating offsets. That's something that we can play with too.

Other than that, I did another test earlier where I smashed a ball into the wall, and it collapsed accordingly. So, go out and have some fun with this :)
(In the meantime, I should get some sleep now... another long day working on assignments tomorrow again...)
Posted by Aligorith at 1:43 AM