[Rigging FAQ] Constraints and Rotations - What you should know

Just like the aftershocks here, it seems that everything seems to come in waves. Over the past week or so, I've been once again reading quite a few instances of people asking for help regarding working with constraints and rotations, and not quite getting the results that they were expecting. While the root cause of the problem is the same from 2.4x to the 2.5 series still, the 'remedies' I'm going to be suggesting here only really apply to 2.5 where things have been improved significantly to make such things bearable.

A brief warning that some readers may find some of the content here upsetting: there is a "little bit" of math involved here, but I'll try to keep it tame.


The situation
Let's firstly have a look at the sort of scenarios where you're likely to encounter the problems I'll be discussing today. From what I understand, most people run into this when they try setting up "gears" - those circular things with the squarish teeth sticking out that interlock/grate against each other to transfer rotational movement.
These are very common in mechanical contraptions (perhaps there is some kind of trend or competition involving these going on atm?), where its very likely that at some point there will be either a pair of gears of different sizes that need to work together or somewhere where rotational movement needs to be converted to translational movement. This is where most of our problems come in.

For gears of equal size just propagating rotational movement, the Copy Rotation constraint (or Transform constraint, though a bit clumsier) should be sufficient, though I wouldn't really count on it. For another of the other situations, none of the constraints can be expected to do any decent job expect if < 180 degree rotations are required.

Some underlying math...
By this stage, you should be wondering about that 180 degree limit I just mentioned. Let's have a look at a little diagram: 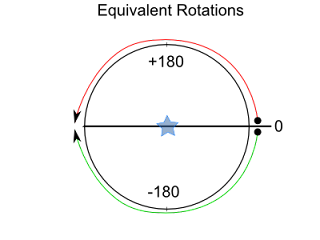 Equivalent Rotations: there's more than one way to skin a cat

Also, as you should have learnt in primary school, there are 360 degrees in a full circle, so there are 180 in a half circle. In the diagram, you can see that a 180 degree rotation gets you halfway around the circle.

Now suppose that I drew a line, and labelled the ends a and b (a corresponds to the pivot, and b the 0 marking). I then place the pencil down on this line, and rotate the pencil in whatever direction to whatever amount I like (but you're not allowed to see how I'm rotating this). Now, I ask you a "simple" question: what is the angle between the pencil and the line that I rotated the pencil by?

After guesstimating a bit, most people are most likely going respond with some positive number between 0 and 360, assuming clockwise rotation only too (NOTE: hopefully this isn't going to sound to confusing, but mathematicians consider "positive" rotation to be anti-clockwise and "negative" rotation to be clockwise, but most people naturally/are taught to regard clockwise as positive probably as that corresponds best to the way clocks run). But how do they know that I didn't rotate the pencil anti-clockwise instead by a different amount, or that I may have rotated the pencil several times before deciding on its final resting place?

The simple answer is that they can't. Just looking at the rotated pencil, you're only seeing a state: the new orientation of the pencil.  There is no way to know with absolute certainty how much I rotated that pencil by if you just walked into the room blind. You would need to know a prior state to have some chance at guessing what I did, and then it's possible that I may have rotated the pencil so much that you still really can't tell (i.e. it could have been rotated several full cycles and it'd still look like it had done less than one).

Now getting back to the diagram, and the whole "180 degrees" business.

Due to the infinitely many ways we could represent an orientation as a rotation, we must have a way of determining the amount of rotation from some given orientation (so that computers can be able to do this). The solution here is that we take the "smallest multiple", giving us a +/- 180 degree range to represent all rotations with. This works well for most rotations, assuming that they are small (which many are), but at the expense of long rotations in one direction, and the risk of flipping when we get to 180 degrees from 0 (as this is a point of ambiguity). However, as the diagram shows us, this range is enough to cover all the possible orientations we can have.

How does this math relate to Blender?
Blender is computer software, which runs on computers, which are really just number crunching idiots machines. So, Blender does math... a lot of it, and usually very very fast.

To best understand how all this works in Blender, you'll need to understand how transforms are "evaluated" (or handled) from the values you set to what you see: 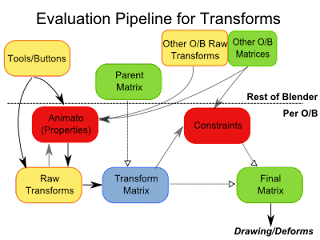 Diagram: Evaluation Pipeline for Transforms
Sorry if this diagram looks a bit hideous/scary, but we'll work through what it all means. How to interpret the symbols:
What does this diagram show us then?
A bit more math...
When describing this diagram, I mentioned "matrices". Most likely, you're sitting there wondering what the heck they are.

Put simply, you can just consider a matrix as a bunch of numbers arranged like a table/spreadsheet, which are able to represent a bunch of transforms. It's important to remember that they aren't single numbers, and that they don't always directly correspond to the original transforms you deal with (i.e. you can't directly read off rotation and scale, but location is sort of an exception).

Now, we're really only focussing on rotations here, so let's describe how that works.

However, as you now know, you can't cleanly expect to get out the actual rotation performed; you can only get the smallest-rotation that will get you that orientation.

What does this all mean? Solutions...
Because there needs to be this decomposition step for rotations when working with matrices, and constraints only work with matrices, constraints will only 'see' rotations in the +/- 180 range. Therefore, when using constraints for long-rotating transforms, you're not going to see the results you expected.

Drivers on the other hand do not have this problem, as they can directly read the original transform values. So the answer to trying to make gears is to use drivers instead.

Why not fix the constraints then? Couldn't you just...? What about...?
Constraints use matrices only, as matrices act as a really efficient and compact way of storing+transporting+representing transforms. It also means that transforms can be combined with each other (doing it separately will only end up with objects moving locally to themselves), so that's really the only way some of them can work.

Furthermore, some constraints will therefore end up changing the transforms quite a bit. As such, the matrices cannot resemble the original transforms. If we just tried looking at the raw transforms, we could be quite off target by the time we have gone through a few constraints. And as mentioned just before, the previous transforms cannot be adjusted through some of the intermediate steps.

A special fix?
For the special case of gears, another solution comes up (as alluded to earlier): why not just use the previous state to know which side to carry on? Sure, this does let this special case work, and is also what most physics-sim type things rely on. However, it means among other things that it won't work when you're:
1) animating and jumping around and/or scrubbing the timeline to get a good feel for the timing
2) running this on a renderfarm, rendering things out of sequence
3) have motion that goes quite far between samples/evaluations, so that we don't actually see the real amounts of change

Therefore, this solution really doesn't work unless things are always going forwards, or you bake your results once they work, and then you've got to still define a good 'default'/'rest' state to reset from. All in all, I currently still do not think this is really acceptable at all, which is why Blender's constraints don't do this. This is also why we don't have a "secondary motion" constraint yet either.

I still hold onto hope that there is some way that we can solve this dilemma in an "elegant" way.
Posted by Aligorith at 4:33 PM