Fun with Sintel "Lite" - Adventures with Posing and Bad-Hair Days

Recently, Ben Dansie posted a thread on BA (at the time of writing, the BA server has been down for the past day or two... perhaps at some point it might come back) reporting his progress in making a "lite" version of the Sintel rig from the Durian Open Movie Project. This is currently at version 2 (EDIT: link here - 11mb Zip). 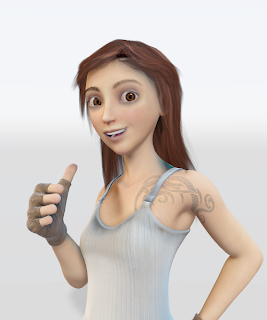 For anyone that has played with the original files, the "full" sintel.blend that was used actually used in the production was a monster of a mess. Apart from having some rather heavy-duty geometry accompanied by heaps of high-res textures, there were so many different objects and versions of Sintel in the file that it was really hard to tell which one to use (unless you were a "core Durianer" I guess ;)

All of these factors mean that on the computers of us mere mortals, making use of these wonderful resources would be a darn lot harder. But thanks to this great initiative from Ben, hopefully this will become more accessible to a lot more users while acting as a good "from production" test sample. 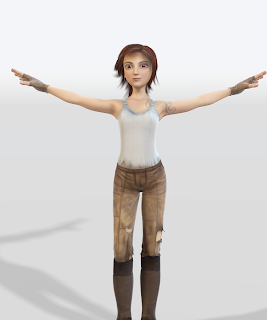 Today I had some time, so I decided to have a little play around with the file, testing how expressive the rig was, as well as practicing some animation skills.

Opening up the file and rendering it, the first thing I noticed was that the hairstyle looked quite "bleh", especially compared to the shots in the film. So, I decided to give the particle hair combing tools a good test drive (for the first time, not on a sphere or a cube!). In this pose above, I initially just started by fluffing up the hair a bit, before starting to experiment with adjusting the length. 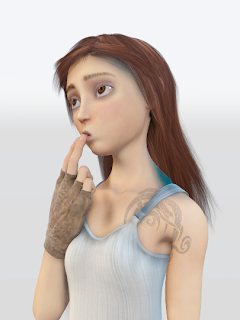 At first, everything was going quite well, with the relatively short(er) hair. But as I started to make a longer, more flowing hairdoo, I started running into some increasingly frustrating problems:
- the comb brush at times started to mess up stuff I'd already gotten all nice and pretty, while not tweaking what I had intended to fix
- some stray hairs started getting a life of their own. No matter what I did, I could not manage to comb, cut, or otherwise wrangle them into a nice place
- perhaps my particle-hair combing fu is lacking a bit, as very soon into the process, I started getting "bald" spots on the top of the head, where the hairline abruptly cut off. Trying to fix this of course was frustrating, as at times I couldn't get the right bunches of hair to move to cover things up, without messing up what I'd already set up. Grr!
- toggling between particle edit mode and object mode, I noticed that there were some rather significant discrepancies between the hairs shown in either mode, with some of the "guide" hairs (I'm guessing about the terminology here) being in places without any real/visible hairs, or some weird hair clusters where there were no guide hairs in sight to try and use to fix the woes.
- trying to get a tight-fit on top of the head, with some contours proved quite difficult, especially after trying to avoid bald patches and/or after adjusting all the hair to try and fix the outliers... 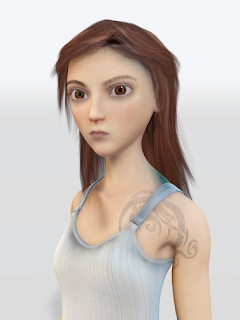 Alas, at the end of the day, I managed to get things to an acceptable state, though more tweaking can as always still be done ;) I'm quite pleased about the slightly frazzled/messy quality it has in places, which I've found from "field observations" tends to be pretty realistic.

Having finally gotten some hands-on "hair" experience, I can say that we're actually still quite a way away from having truly optimal/nice to use hair tools. And I haven't even tried to run sims on these yet! Gee... I can only imagine the pain of working on a character with several hundred feet of hair. Not to mention the pretty-common in real-life "hair-tie + hair + hands" type interactions, which AFAIK would still be a nightmare with the current state of the art tools. (Hmm... perhaps this area warrants some further investigation...) 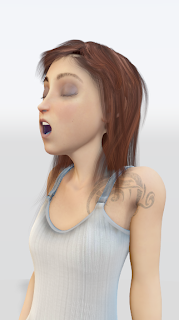 Now, moving on to the rig. Having played around with some of Nathan's older rigs, IMO, some aspects of this rig feel a bit clunkier/less intuitive/comfortable to use, at least when getting familiar with the rig.

One of the first stumbling blocks for me was that Auto-IK on the arms doesn't work due to some of the trickery used to implement some other features (i.e. "hinges"). This made posing the arms a lot more work, since I'm used to just roughly pulling arms into place before carefully adjusting angles/etc. for a nice fit. I could've gone straight for the IK arms instead I guess, though with those you do lose a bit of fine control later on...

The other main issue was the facial controls. While I'm aware of the time constraints and compromises that occurred due to these during production, I'm not convinced that the reliance on custom properties on fixed bones is actually such a great interaction design. IMO direct manipulation of bones (or widgets) on the face feels more natural, and introduces less clicking/mental overhead required for remembering which bone(s) had which properties to do what, as the controls are situated closer to what they control. Having said that, I'm not too fond of those rigs which use "solid" widgets (i.e. shaded custom bone shapes), as these give the rigs a really tacky "plasticky" clunkiness, which doesn't really do animators any favours when they're trying to create any quality emotive-poses.

Speaking of facial controls, in the pose above, I was going for a "sneeze" expression, though perhaps the lack of a nose "scrunch" control didn't really allow that to get conveyed that clearly... As a result, this pose probably looks a bit more like snoring ;)

Alrighty, enough blabbering for now. It's time to get some sleep. Maybe tomorrow I'll have time to make a few more... Until then, you're welcome to post critiques/interpretations of the poses, or even suggestions of poses to try!