I've recently been setting up a little set of an upstairs bedroom window in a traditional-style weatherboard house for use in some later animation tests. 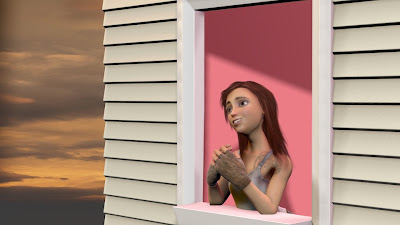 As usual, it's hard not to play around with various poses and camera angles, so read on for other renders and production details!

From a low angle, closer to the window... 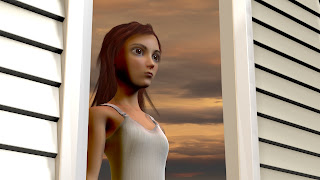 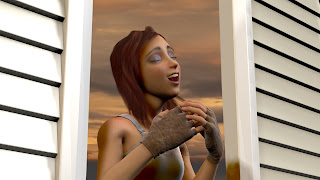 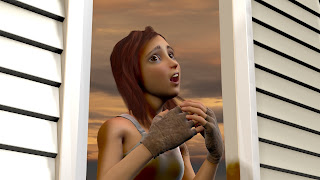 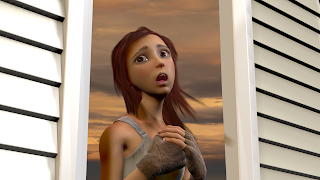 As you can probably see from these shots, I haven't actually modelled a complete room, but just the front facade and a side wall for the main camera angle I was interested in (first shot before the jump). There is no ceiling for the room, nor a full set of walls, not even a floor!

Having said that, having the clouds within the window-frame in these later/closeup shots gives these more dramatic impact. Speaking about the clouds, they are actually from a nor'westerly evening sunset I took photos of last month that I hadn't originally intended to use as background textures, but turned out to fit in quite well with Sintel. The full set of these can be found here.

The set itself is not quite complete yet. I've still got to fit in one of those vertically sliding windows, with the 6-8 little glass panes mounted within. However, it's kindof hard to find a reference for the exact type of window that I'm going for to see how it should actually fit into the frame, even though I seem to recall having seen these windows somewhere before... There are also curtains that I'd like to try and include here too, though they're not that much of a priority.

Also, just a quick note about the weatherboards:
I started with a simple cube, flattened, stretched, and then slanted it. Next I added an array modifier to this weatherboard to create a panel of weatherboards. This object was then alt-duplicated (so that modifying the base weatherboard would affect all the rest, with lengths and repeat counts adjusted so that I had some other panels of weatherboards to go around the sides of the window. Finally, all of these had bevel modifiers added before the array modifiers to soften up the edges a bit (i.e. for a smoothed-over-by-paint look).
Posted by Aligorith at 1:09 AM