As is customary in these parts, snow falls only last a day... 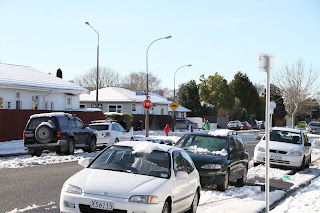 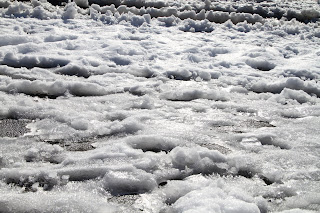 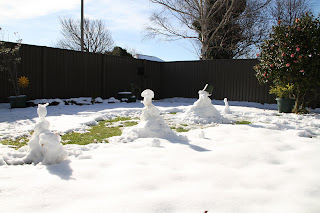 Well... perhaps less than a day. 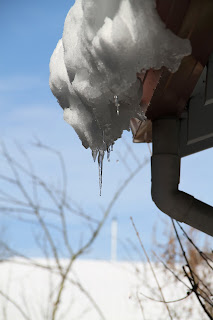 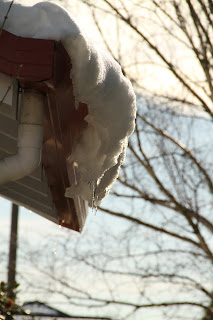 By yesterday evening, it seemed that the great thaw had already started, with plant-life freeing itself from the thick white blanket which had been covering them all day.

But it wasn't just living things from which the snow disappeared from. As you can see in the photos above, the snow off the roof started sliding off, precariously hanging over the edge of the spouting... 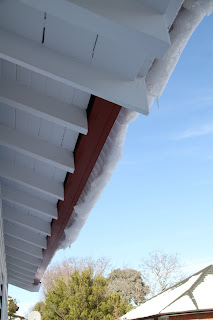 All night long, there would be an occasional *thud*, much like the sound of a chef in a Chinese restaurant preparing a chicken or some roasted meat for serving (thus leading to jokes like, "oh, there goes a drumstick! And now a wing!"). While outside for one last time in the late afternoon, I managed to catch a glimpse of the process in action: a blanket-like sheet of snow would dangle from the spouting, dribbling all the while, and then suddenly, part of it would just break off... BAM! A lump of snow just committed suicide!

However, it soon became clear that part of the spouting perhaps didn't fare as well as the rest, probably because it graced the end of a section of roof which was longer than any other part of roof in the house. The weight of the snow caused part of it to buckle and swell. In a bid to help save it, I had a bit of fun whacking snow off the roof this afternoon; big, juicy chunks of snow :D 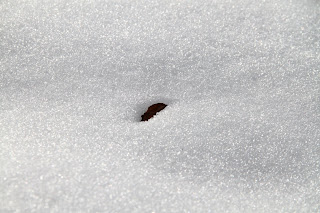 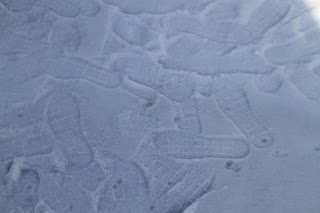 Though the stuff today wasn't as nice as the soft fluffy stuff from yesterday. It was more hard+crunchy, like the stuff that we'd use to have to remove off the side of the old freezer using a fan heater and piles of towels splayed across the floor (yay to frost-free freezers!).

Still, it was great having a little true mid-winter break, doing something completely different for a change.
Posted by Aligorith at 11:24 PM