I've been doing a bit of a sweep of the bug and patch trackers today. It's been a while since I've gotten around to working on these things, with various distractions, projects, and deadlines in the way. There are perhaps two main news items that will be of interest to readers of this blog:

1) scuey's patch for "Drag-N-Drop Parenting in the Outliner" is now in trunk! 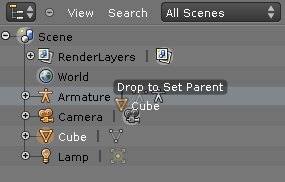 This patch makes it possible to use drag and drop to parent and unparent objects in the Outliner.


While I do have some reservations about drag and drop in general, especially since it is often done so badly so often, this patch and the Blender-flavoured implementation of this technique are quite nice.

Congrats to scuey for getting his second (?) patch into SVN! 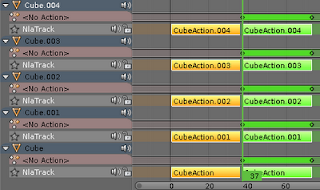 Sometimes it is necessary to be able to enter Tweak Mode on multiple NLA strips (each from a different object) to edit the keyframes of all these objects relative to each other.

It is now possible to do this again. Previously it was possible for a while until fixes for a number of bad bugs ended up disabling the accidental functionality.