This morning, I noticed that our sensitive plant (i.e. Mimosa pudica) had developed a flower bud. So, without further ado, I set about trying to get some shots of it! 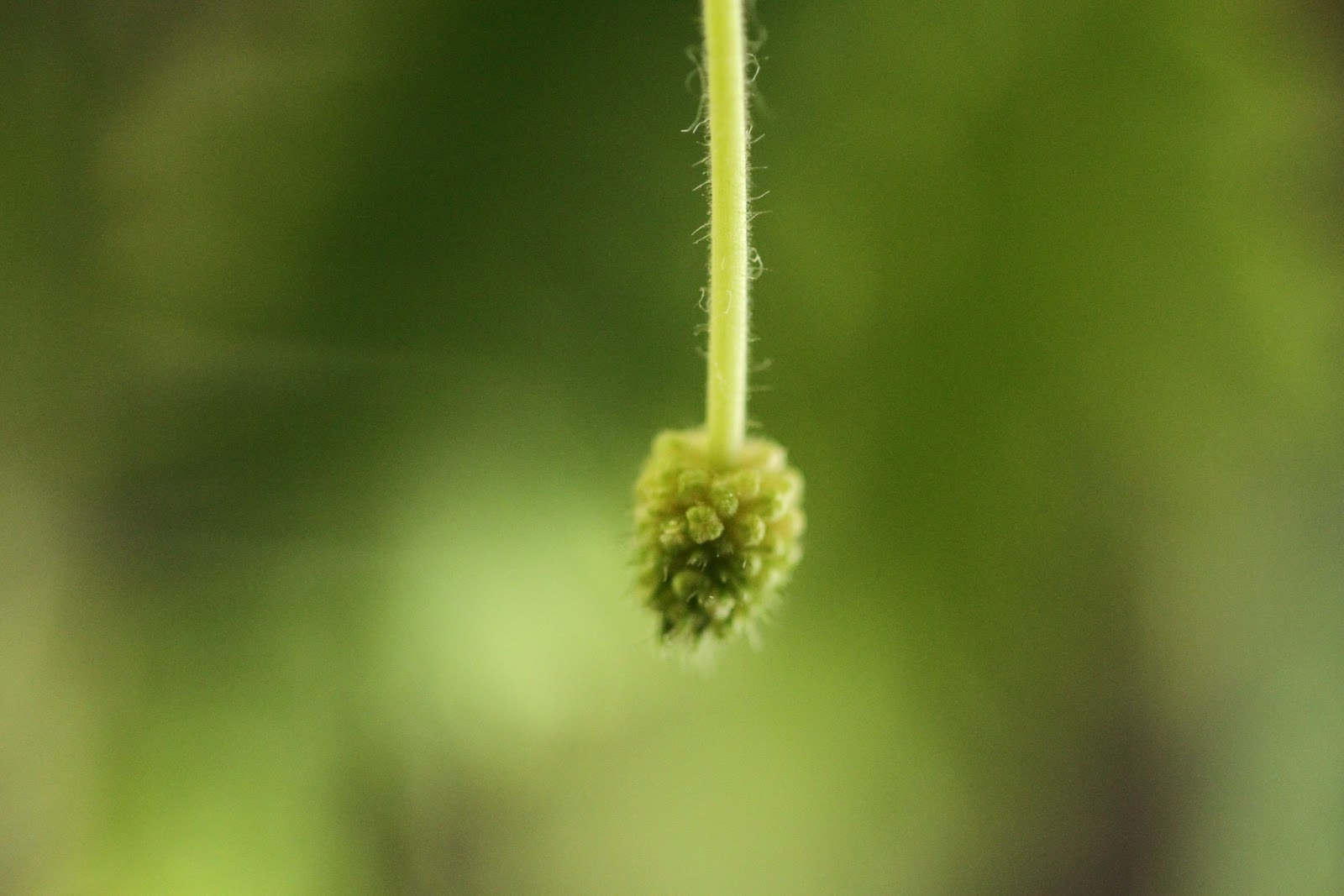 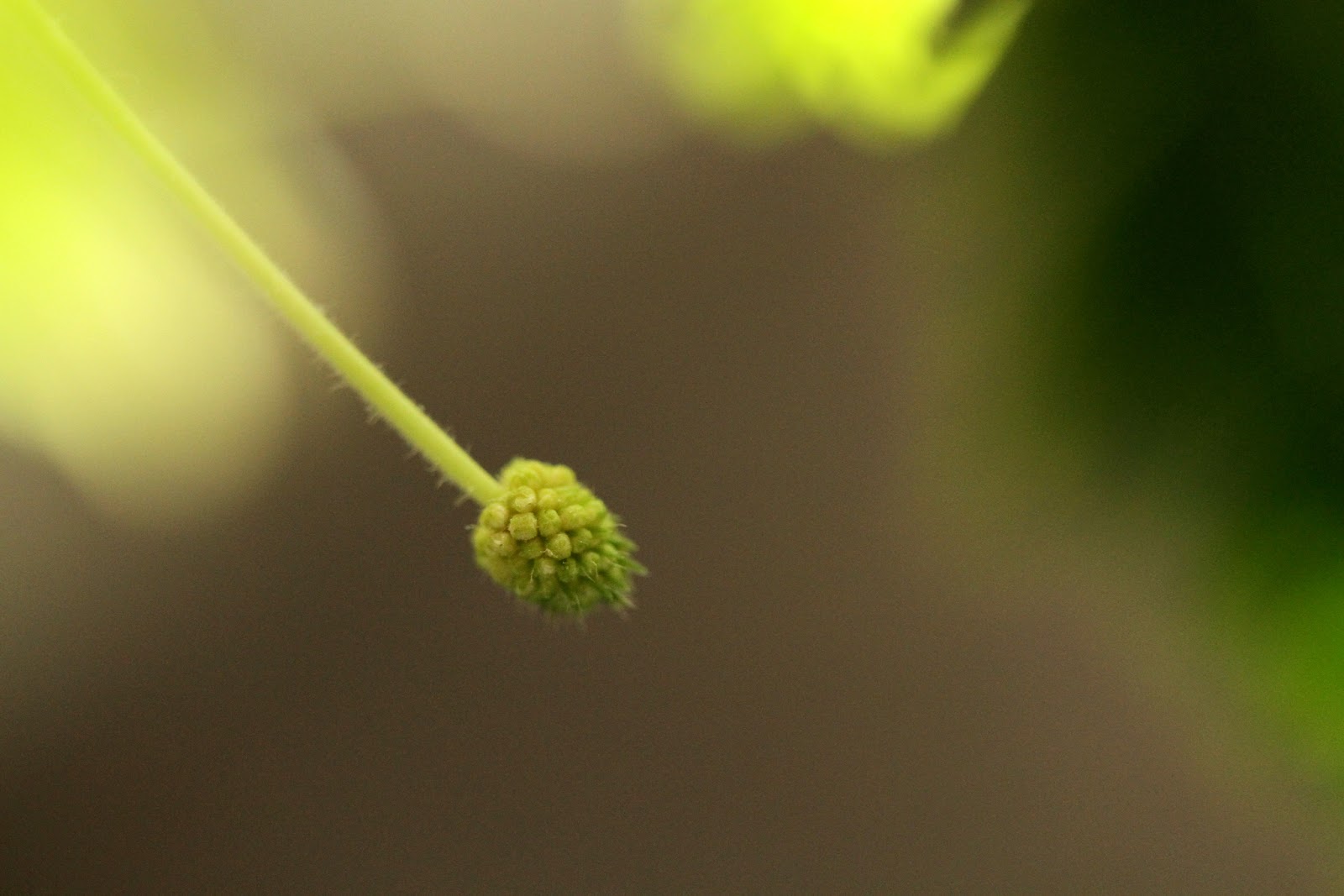 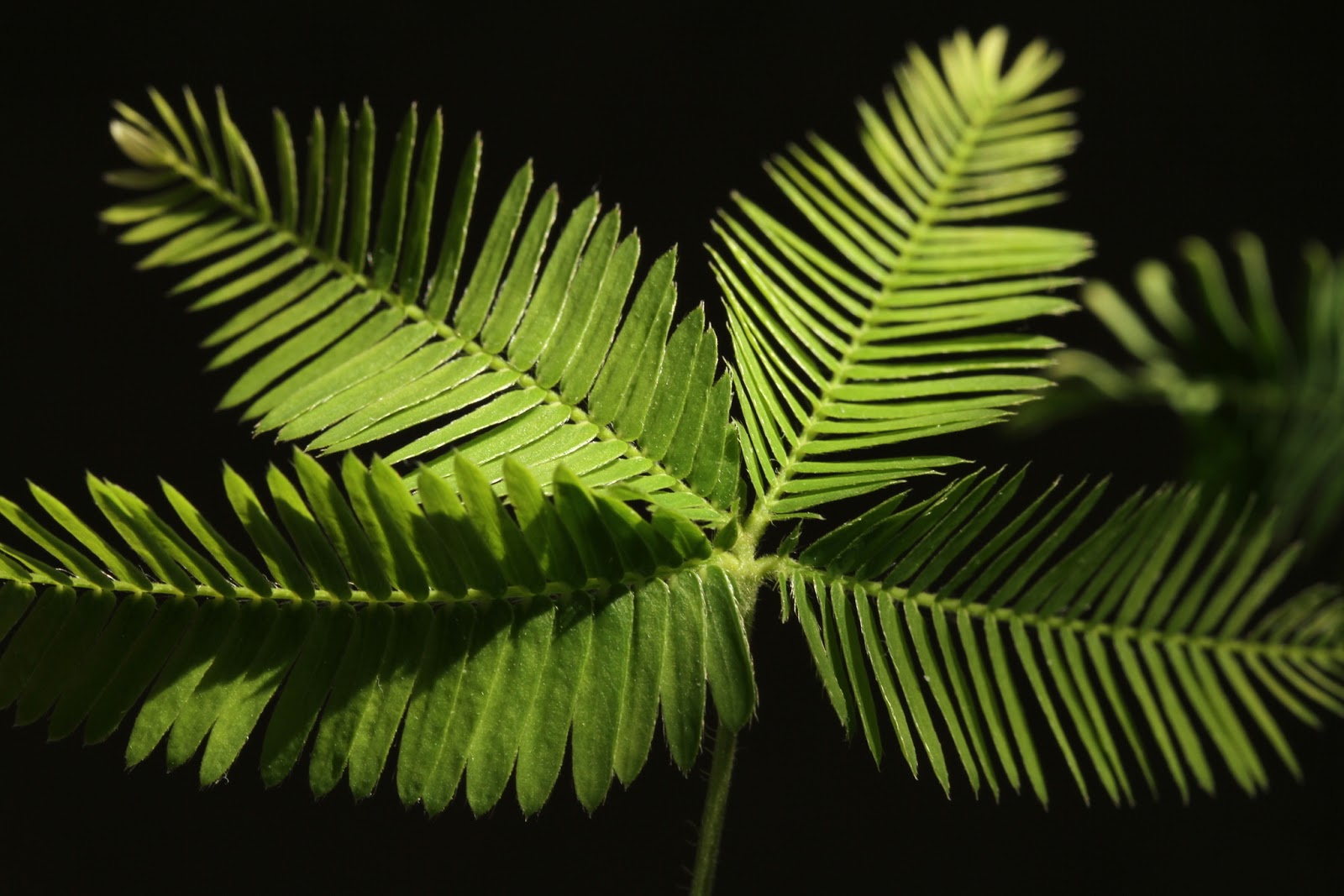 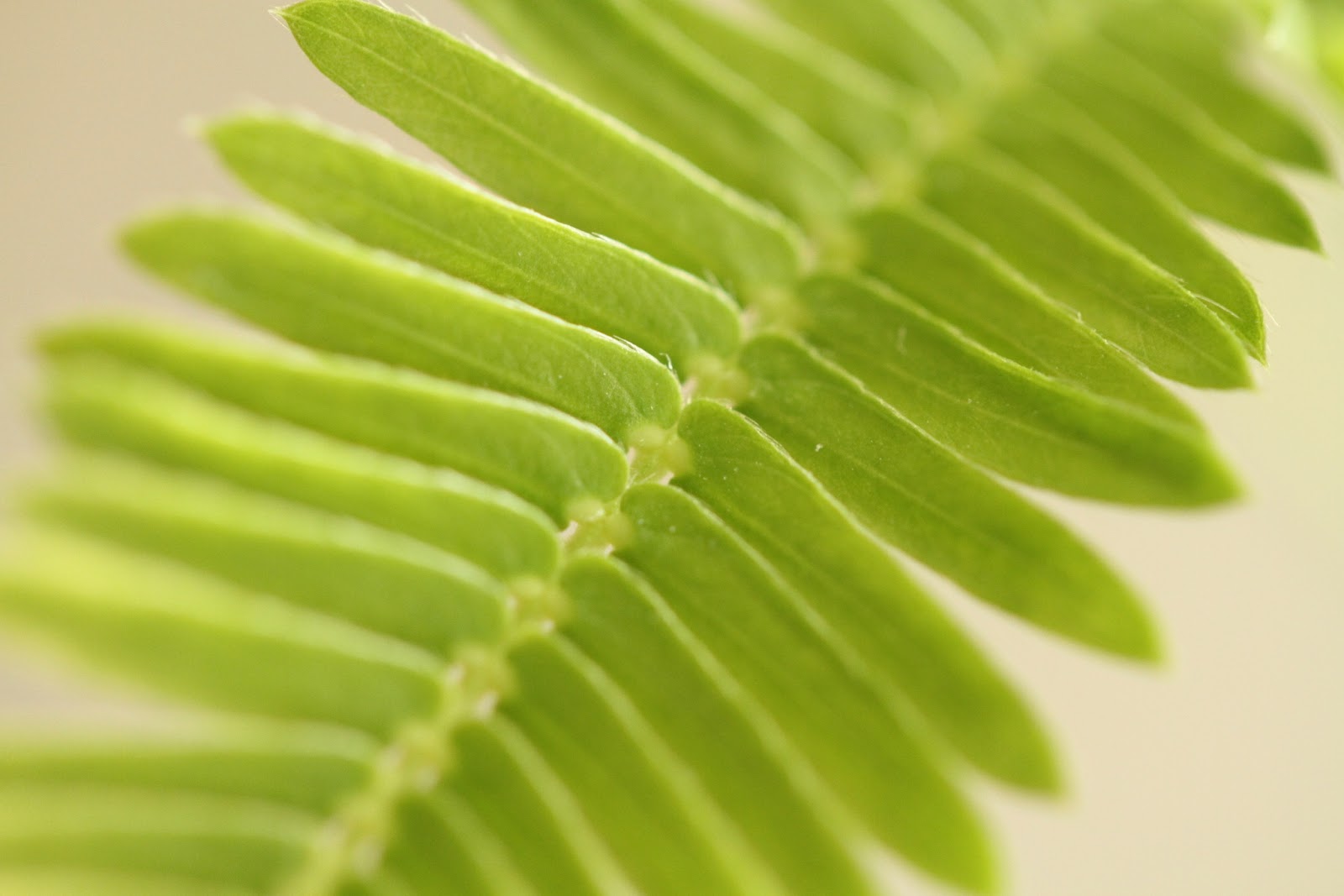 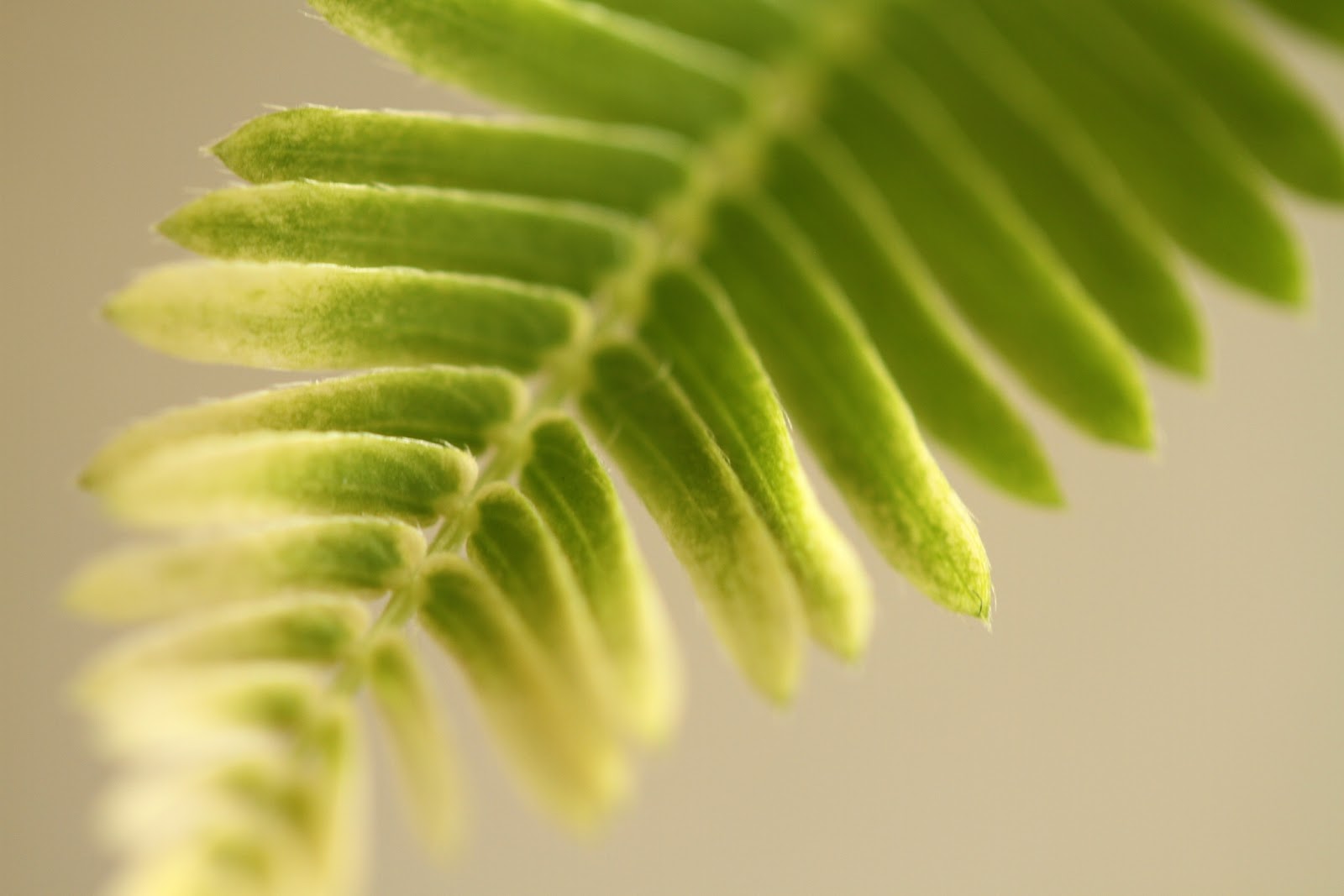 Currently, it's still in the "bud" stage - which should be obvious from how tightly packed and green it looks. But, within a few weeks (or sooner), it'll turn into a dainty, fuzzy pink ball. To be precise, there should be several of these actually, even though currently I've only found one flowerhead.

How do I know? Well, this is actually the second mimosa I've had (technically, it's probably more like the third or fourth, though the other ones never really survived). It's also the first I've grown from seed (these are tiny tiny little things - smaller than sesame, but still larger than the shaving-like "kanuka" (a type of NZ native tree) seeds which are really finicky to deal with. 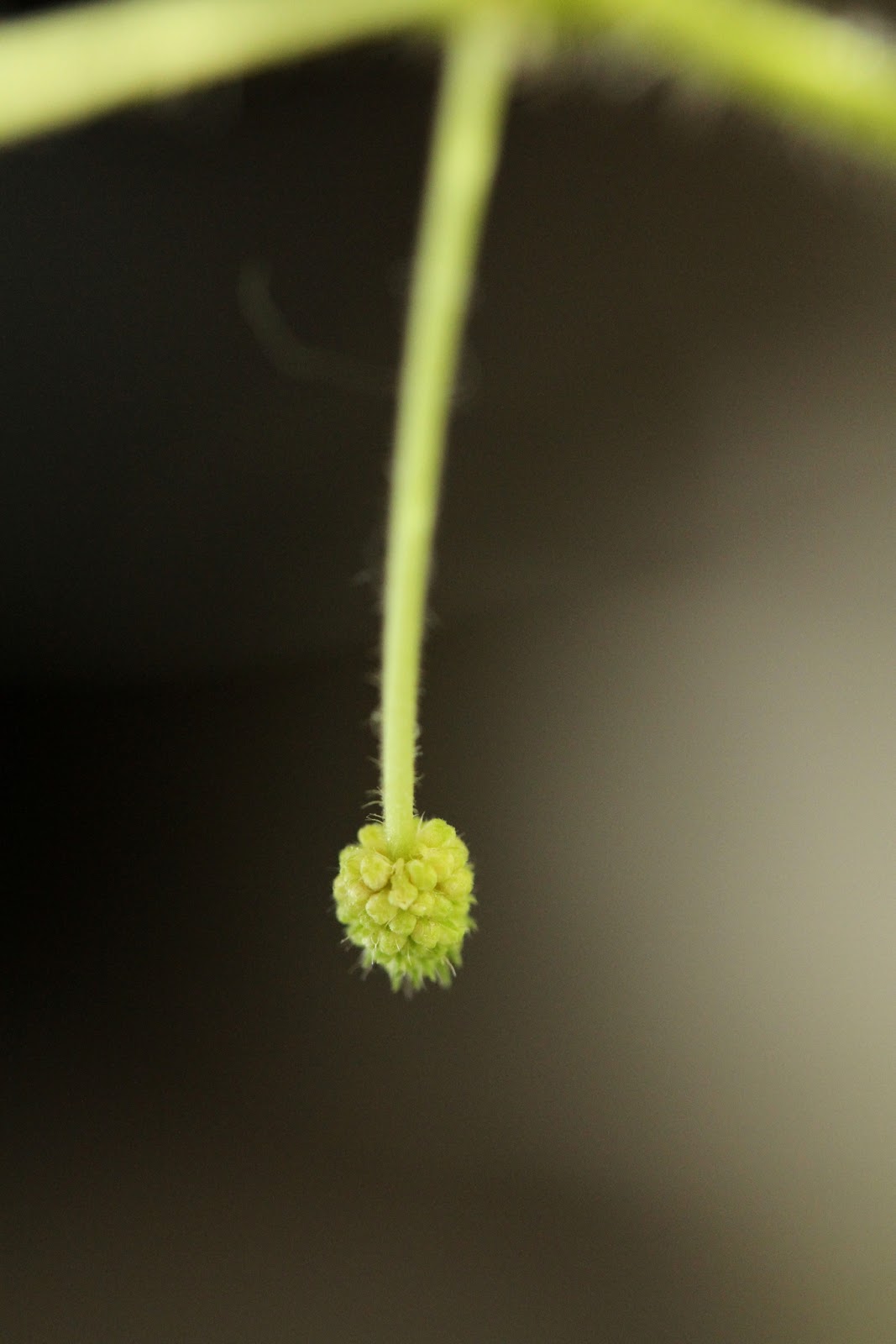 The first mimosa I had was actually one of two we randomly stumbled across in a garden centre one afternoon (and haven't seen ever again anywhere in Christchurch - both before and after that encounter). They came in smallish pots, which turned out to be a bit of an issue going forward - left to their own devices, they tend to grow quite long (i.e. a good 10-15 inches or so for the main branch). However, when they're in small pots, they start running out of space, so they start flopping about limply, and growing ever more scraggly. 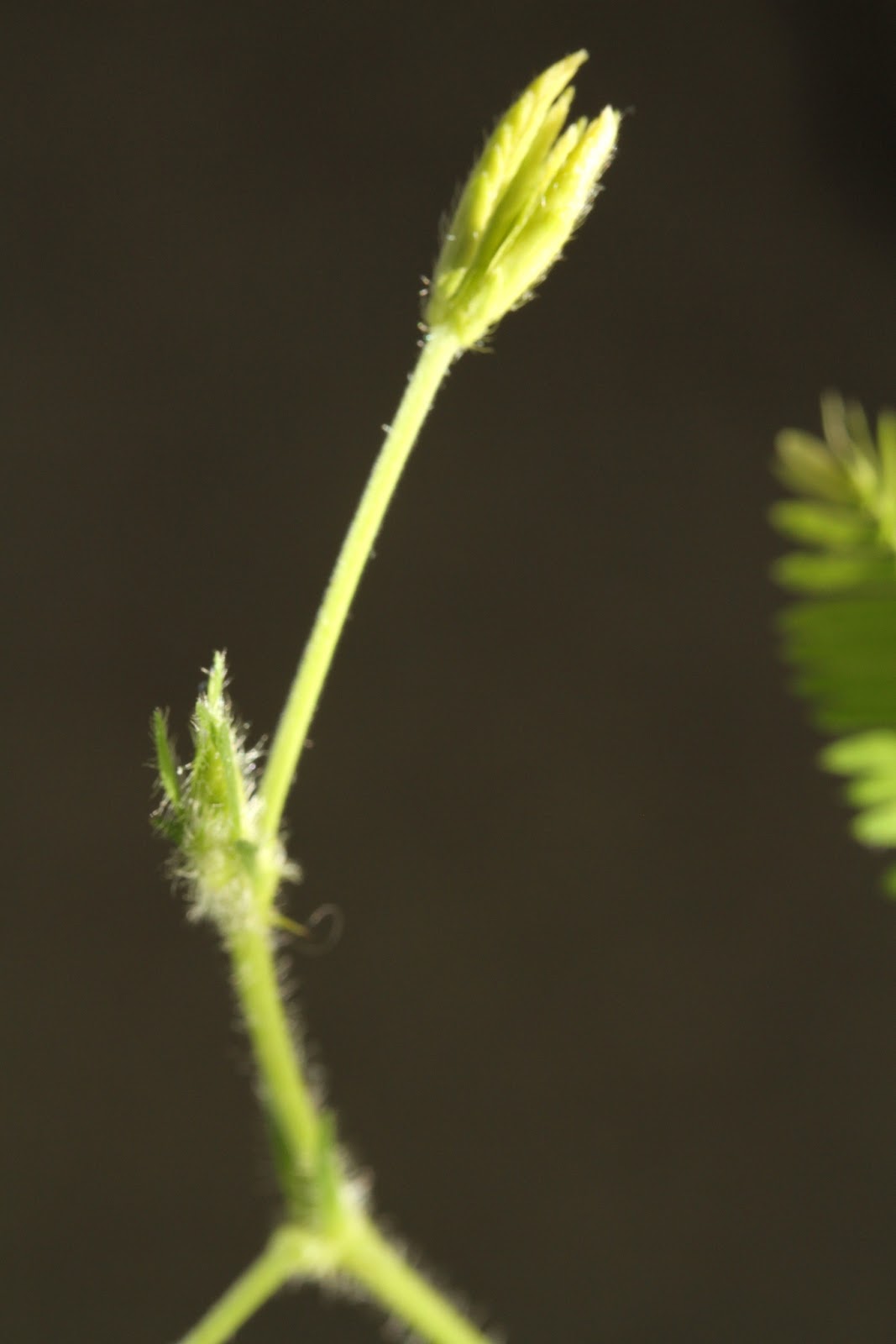 New shoots. Sensitive plants branch out like this - growing about an inch between nodes. At each new bud, they form a cluster of leaves (each leaf consists of a large fan of individual leaflets). Initially, after the initial cotyledons, they start out only have one leaf per branch, but after about 3 rounds of that, they start having 2, then 3, then 4 leaves. It's quite neat to watch this progression taking place, with new shoots every other day. 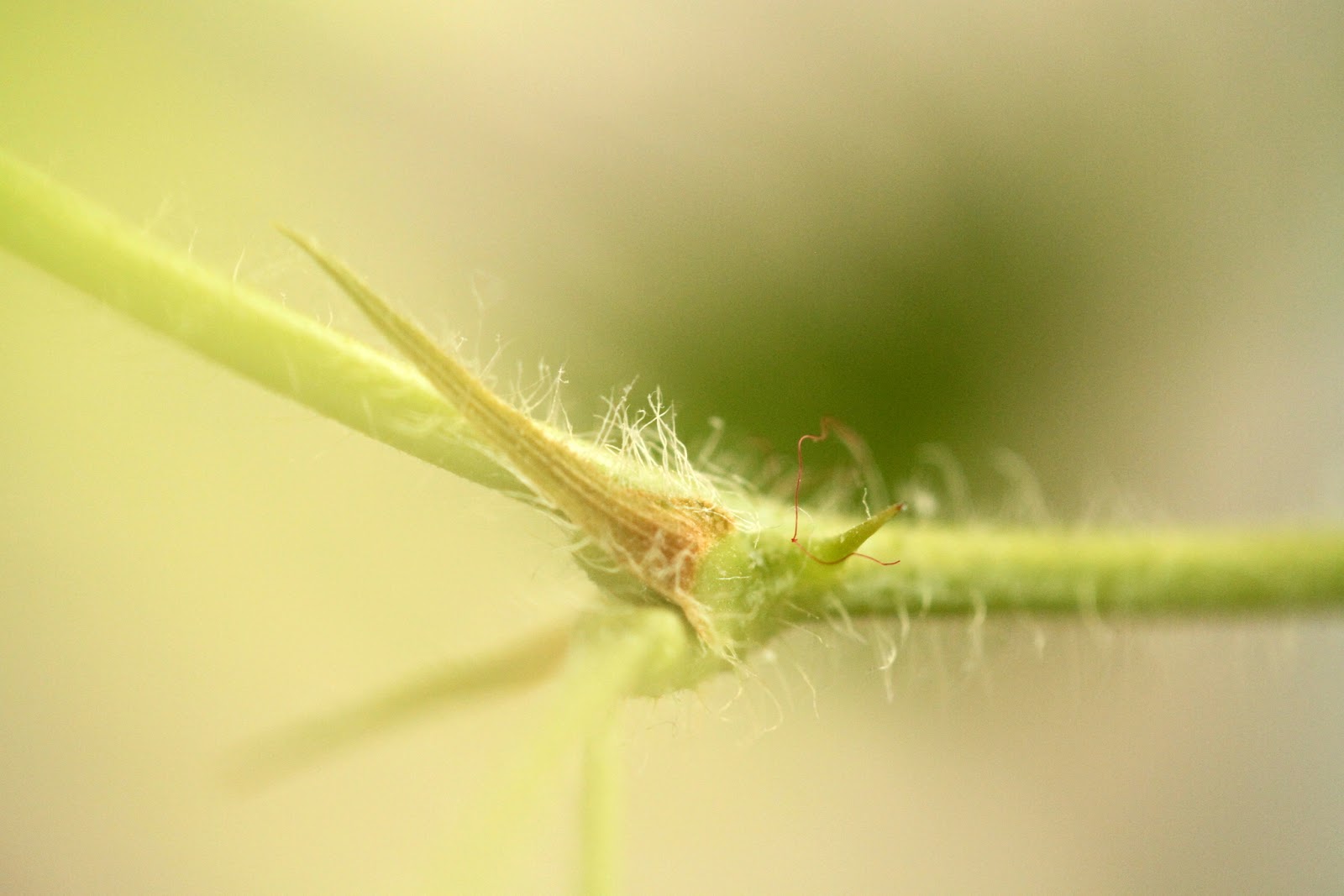 Here is one of the many thorns they have on their stalks. Yes they hurt if you manage to stab yourself on them - that's the whole reason for their existence... to ward off nosy cows and other grazing livestock, by giving them a nasty mouthful of pain. Also note that the stalks are covered in tiny little white hairs.

So, we tried transplanting one of the two original plants to a newer and larger pot. This did not go down very well, as the plant died within days. We later learned that it's something about how sensitive plants are intolerant of nitrogen rich soils or something like that - basically, any soil that another garden plant had been growing in.

Thus, that is how we ended up with only one mimosa plant. It used to live in the living room, on the top corner of the TV cupboard - basically, as close to the window as we could put it. In that spot, it grew, and grew, and grew and grew - a long, floppy, slightly curved branch which flopped down the side of the cabinet towards the light, and a smaller secondary branch when parts of the main branch started dying off later.

Then the Canterbury earthquakes happened. In the September 4th earthquake, Mimosa #1 was one of the casualties, falling off the cabinet (remember, it was on the very edge/corner), and losing half its soil inside my shoe. Although the fall was not lethal, the shock + loss of soil did end up causing some damage, as it became much weaker after that event. 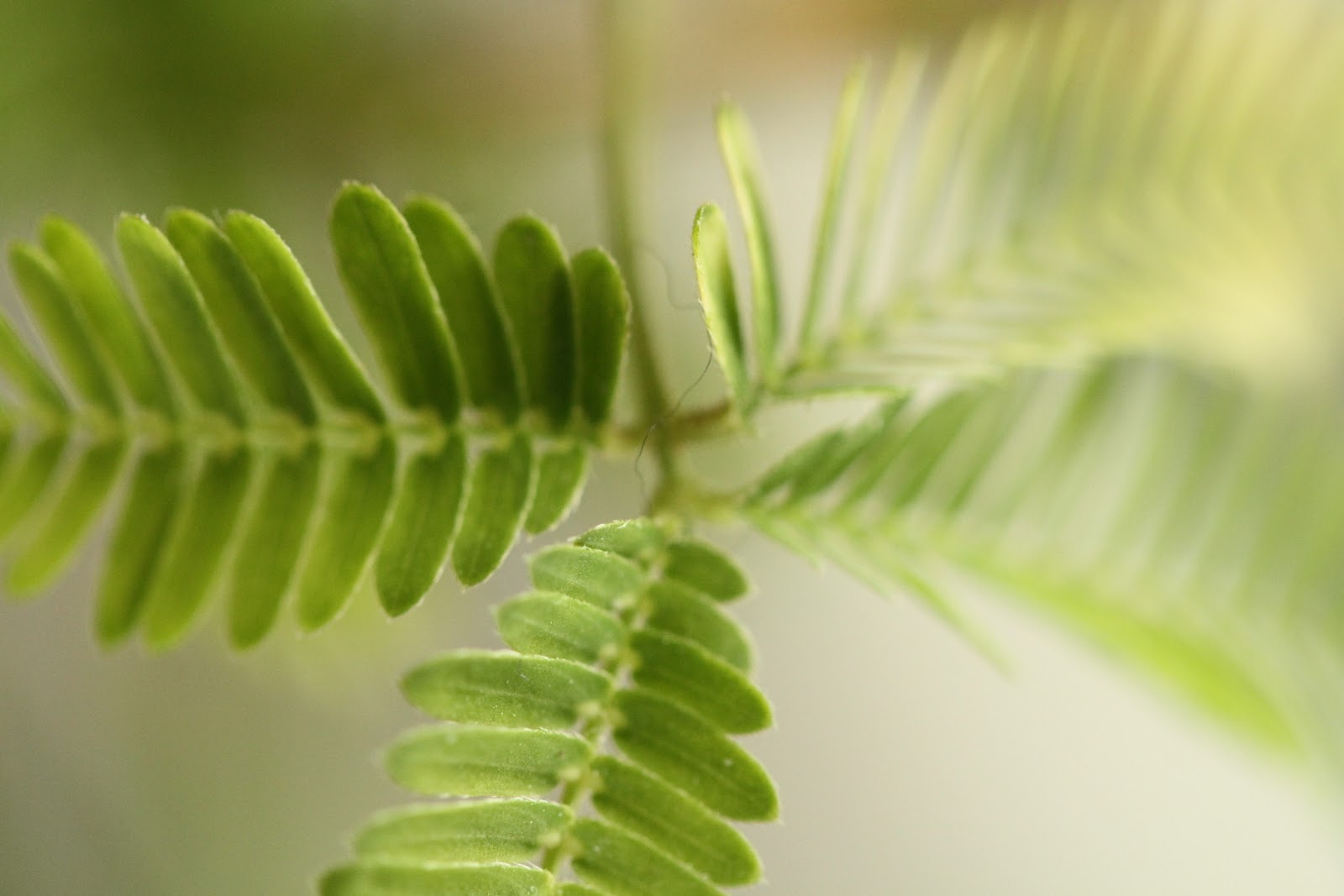 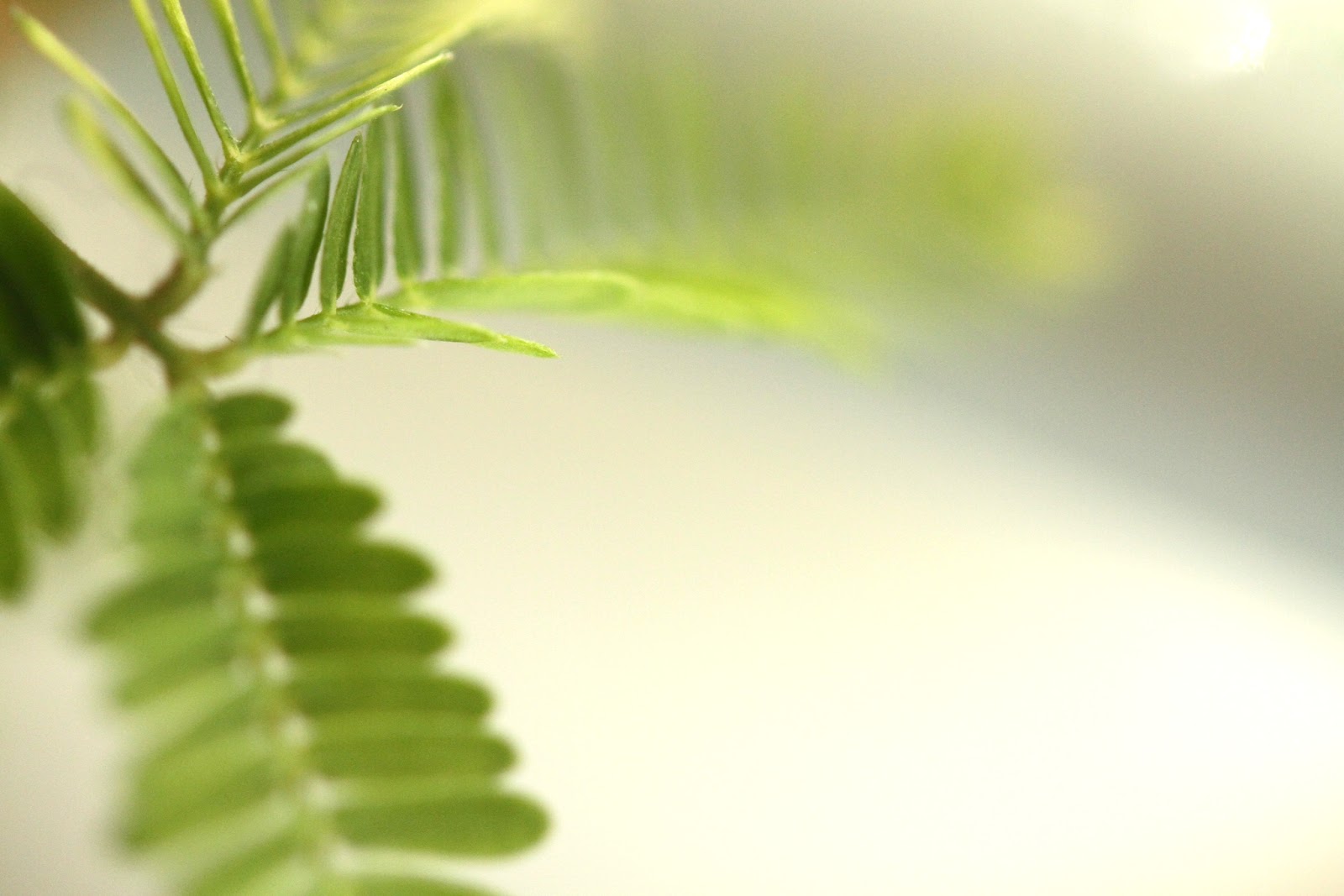 The typical, four-leaf configuration of leaves on each branch. Each leaf has a v-shaped profile, and feather-like shape. When you gently stroke the spine of each leaf, the blades quickly close up like a clam, and only reopen some 5 minutes later. (Well, that's what they're supposed to do. When they start getting a bit old, their responses seem to become a bit dulled)

Fine detail of a leaf. Note how the ends taper off. The lower shot features a leaf whose tip has been developing a variegated/bleached look, possibly from not enough sunlight in its current location (despite being beside a nice warm window).


Some time later, we noticed that mimosa #1 was starting to flower. It was quite a pretty sight, with several small pink balls of cotton-candy fuzz (with a little bit of spunky fizzy strands poking out) on various branches. Each was about the diameter of a fat stylus pen, maybe closer to a key on a standard keyboard. It was quite pretty.

A new flowerbud on Mimosa #2 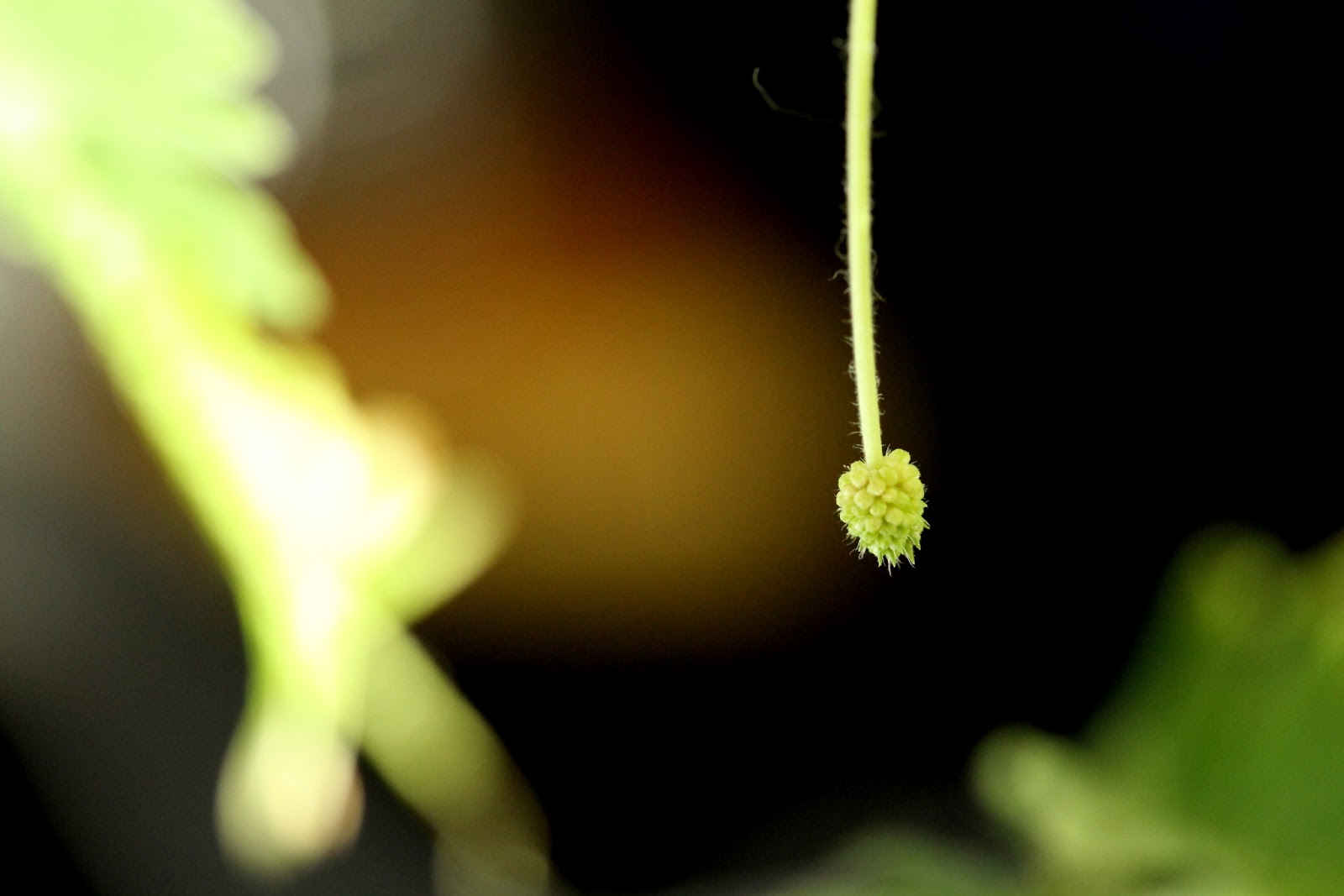 In this shot, it almost looks like a small strawberry/raspberry, or maybe even a bunch of grapes


A few months after it flowered, mimosa #1 slowly started dying off. The leaves started falling off, one by one, blade by blade. The stalk started becoming brown and crusty, before eventually, a whole branch died off, and then the other one did the same. Soon, we had no mimosa, and none to be seen anywhere. 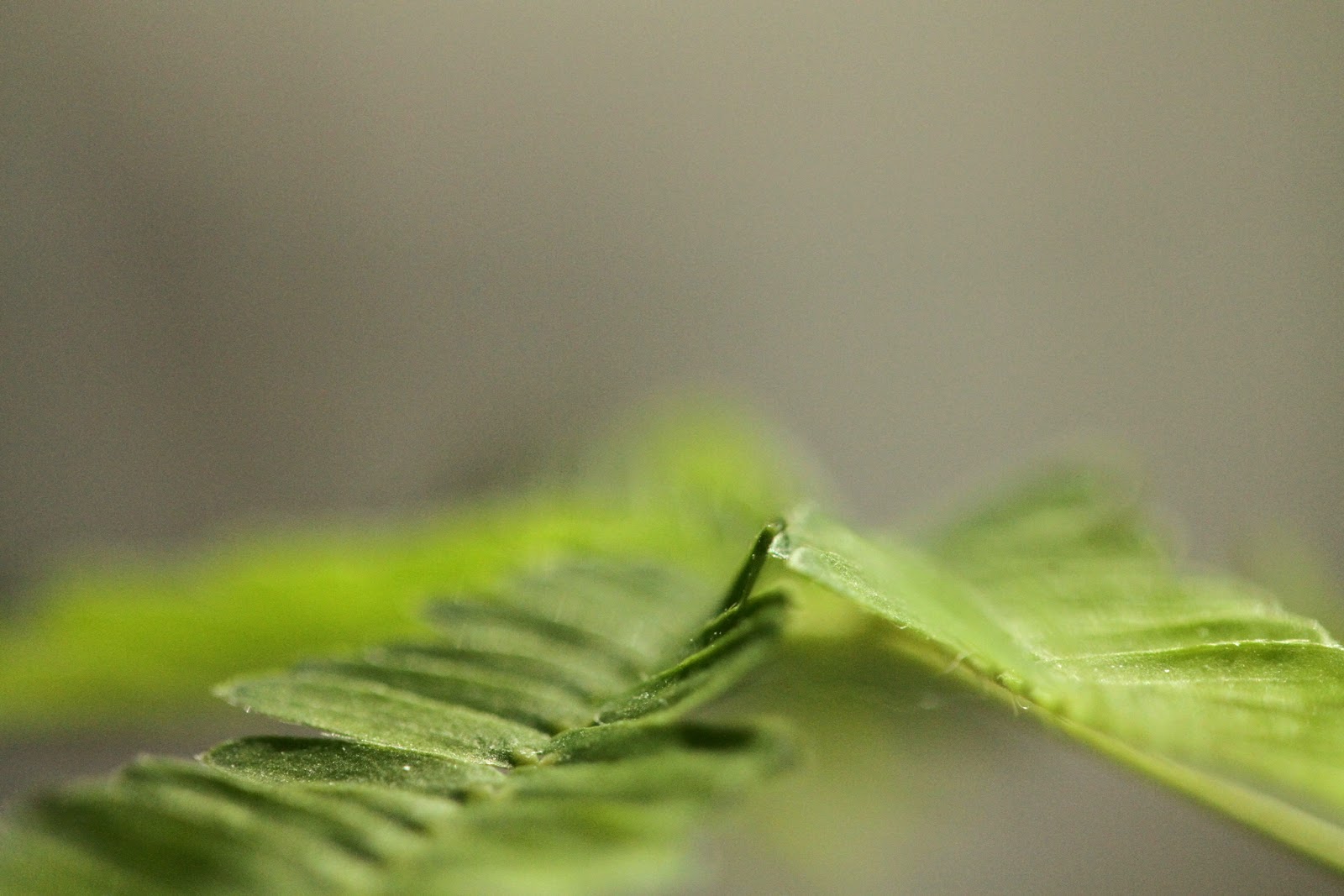 About a year or two ago, I stumbled across a local mail order seed company in NZ selling Mimosa seeds (for the price of a few stamps + a self-addressed envelope to send back the seeds). That's how Mimosa #2 finally came about. It took quite a bit of trying to get the seeds to germinate though (specifically, they only seemed to germinate reliably when kept in a 23 deg C, temperature controlled environment, with constant light; in other conditions, success rates so far have been much more dismal). 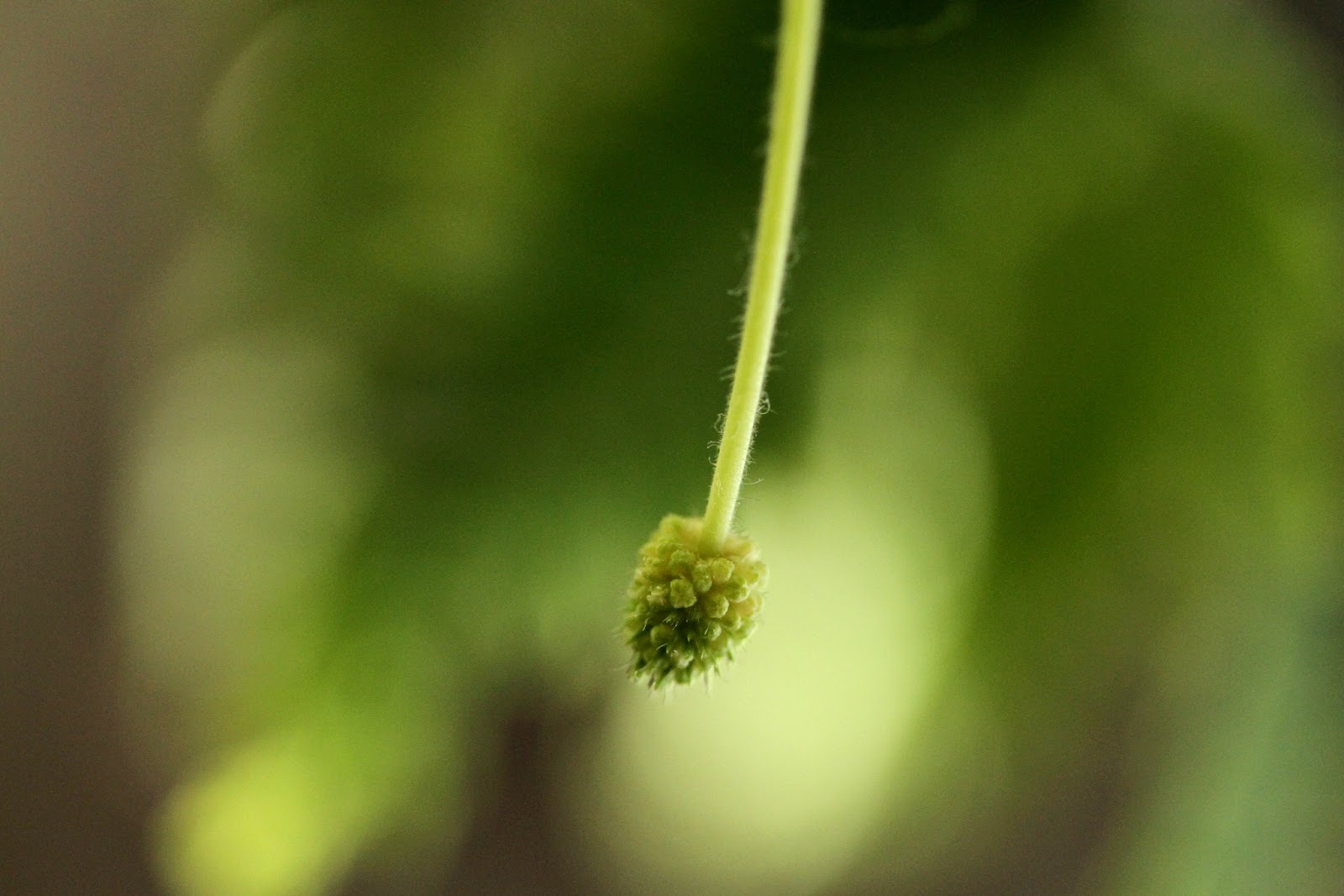 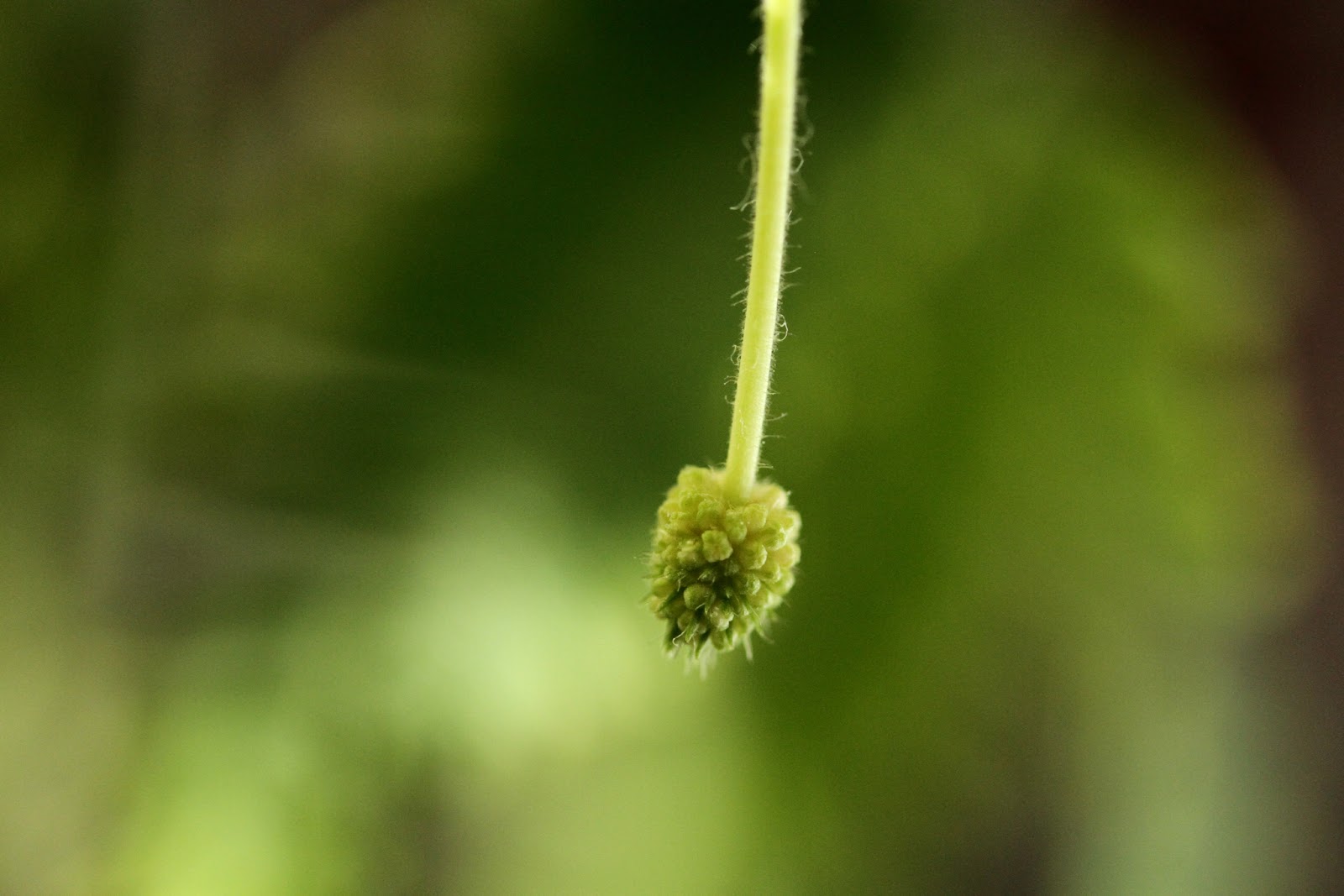 In these two shots, the flower head was in focus (I made it so by zooming in double in live view - keeping things stable at that magnification was another matter), but the backgrounds ended up coming out far too busy and distracting.

One of the better shots from the set, and my 2nd favourite shot. It's close to the composition that I wanted, but the flower head turned out a bit OOF unfortunately. 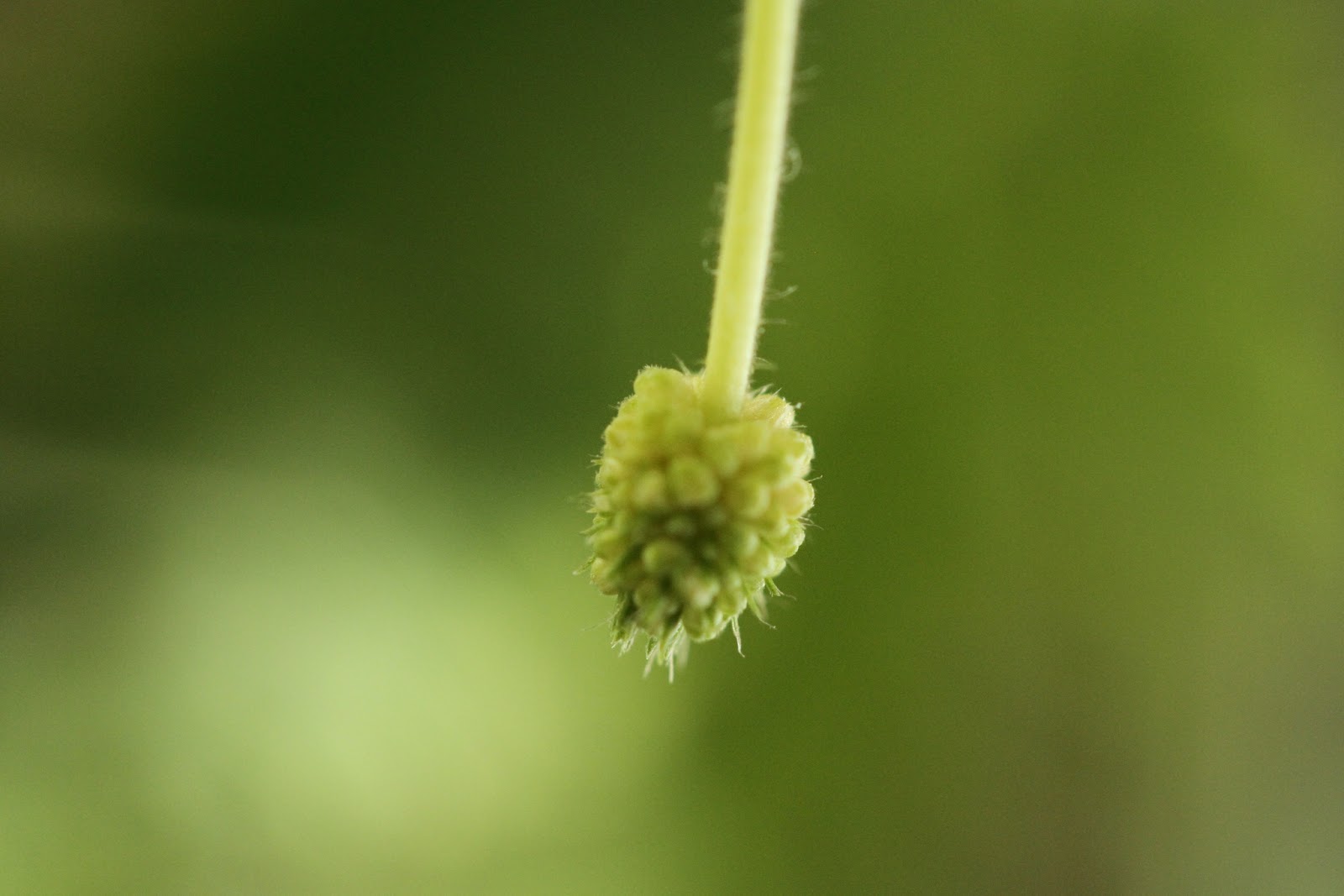 My favourite shot. Composition-wise, this is my favourite of the bunch. Unfortunately, in trying to get things to line up nicely, I've ended up moving slightly too much, causing the front of the flower to get OOF.