After a bit of deliberation, I've decided to release an little teaser for a little side-project I'm working on at the moment. Please be aware that this is still a WIP design, with a few things that I've already tweaked/added since when this screenshot was made. 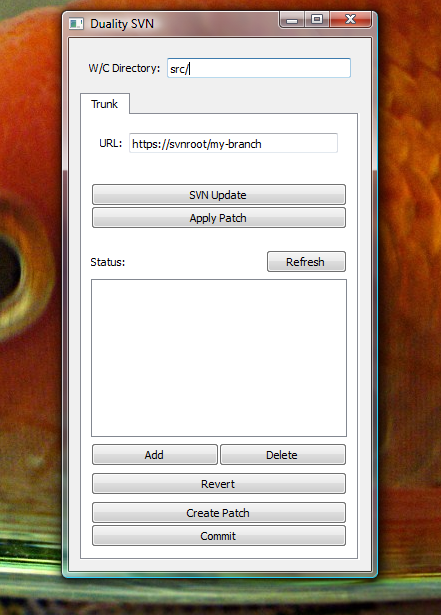 This is the current UI design - version 3 to be precise - of a little SVN client/frontend that I've been working on. It spawned out of my frustration with regard to current SVN tools, especially in terms of branch management, which lead to an idea for trying to (hackily) get the best of both worlds.

Now, I could have done this without coding a GUI for it, but the more I investigated, the more it became apparent that to keep some operations manageable (namely add/delete, and keeping track of which branch I was working on), I'd need to be able to script some of that. Furthermore, I figured it would be a neat little project to try and get my head around the Qt UI toolkit at last.

As a neat upside of this, even if the original purpose of this tool turns out to be a complete and utter failure, at least I'll have a streamlined SVN tool that I can use. Since it is designed to be able to be used normally too, this means that I can replace Tortoise SVN with this for most of my everyday SVN needs (though the status indicators are still handy), and say goodbye to some of the annoyances with some of its tools that has been building up over the years.

Sure, there are other SVN tools out there (not to mention other VCS's, though I'm currently not interested in monkeying around with those yet for this particular project), but with a large SVN repository like Blender's, which is located across the world, some of the things that most of the other clients out there offer are really useless/pointless for me.

Anyways, enough blargh from me, and time for more code! Hopefully next time I post about this, it'll be the for the first official release :)
Posted by Aligorith at 12:28 AM