It's now been over 2 years ago (!) since I first put into place the current way that the channel lists are organised. Having used it a bit, and listening to people using it, it seems that some things aren't quite right.

To keep things manageable, for now I'll just focus on more top level stuff - like how Objects, Materials, Lights, Textures, etc. - are arranged in the list relative to each other, since this does affect how much of the old structure I'll need to port over to the cleaned up filtering code I'm currently working on (main targets for that are splitting up visibility filters, and replacing the "check then do" with "grab to temp then bundle up").

Dealing with F-Curve Groups stuff is NOT a priority/focus/goal at this point, though I will address this LATER. +1 comments hounding about this will be removed.

With that out of the way, let's have a look at what the current list looks like. 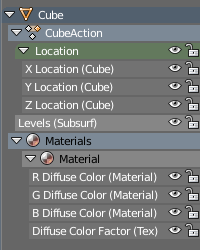 
The focus here is really on looking at how the Bold+Underlined items are grouped relative to each other. That is, how the datablocks are presented in this list.

To understand the current grouping, let's have a look at the ideas+assumptions underlying how this was conceived:
However, this seems to fall a bit short in real usage. It turns out that the "Material list Expander" and the "Particle Settings List Expander" often just get in the way of getting to your materials, and cause them to get quite indented, leaving stuff like textures getting indented quite deeply. Admittedly, this ends up feeling like a bit too much work! 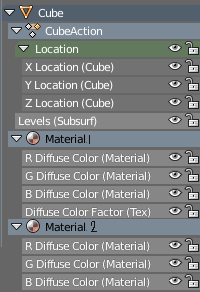 Where we do away with the material/particle-list-expanders, and just dump these inline (or out one level). These would still be the materials that Object "cube" (in this example) would be using.

One factor which I now think I forgot about when doing this earlier was that there are datablock filters, i.e.

these can be used to effectively remove those lists anyway if they cause clutter. And probably with smarter expand/collapse tools, managing the aforementioned problem would not be a problem here.

But what about textures and node trees. No longer are these always to be found linked to object-data datablocks (i.e. Lamp, Material) or World-data, but rather, in increasingly varied places, including brushes. Where do all these come in?

My current thinking is that perhaps generally relinkable Node Groups and Textures should perhaps get their own headings on the same level as Objects and Scenes, though perhaps instead of each Texture or each NodeGroup being one top-level heading, there could be a "Textures" and "Node Groups" entry, with the various texture/nodegroup datablocks being listed under that.

Hmm... describing that sounds a bit weird, so maybe that won't work that well :/

Anyways, as you can see, this is actually quite tricky to get right. More updates when I think of some other ways...
Posted by Aligorith at 5:07 PM