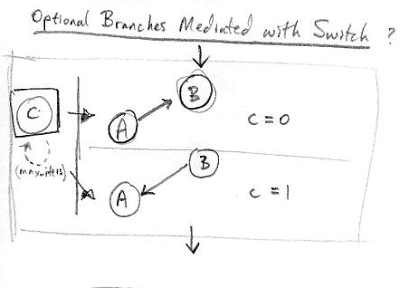 
As a bit of a disclaimer, all things considered, this feature is currently not really that high on the priority list of stuff that really needs to be present. Despite this, I believe that it really shouldn't be too difficult to have as something that we can slot into the system at a later date if/when it really does become a necessity (and we have the capacity to work on properly supporting it), at least based on current design ideas (and/or lack of a solid codebase with particular sets of restrictions).

There are perhaps just 2.5 scenarios in which this type of thing comes up:

Overall, I'm perhaps a bit skeptical whether these are good ways to work or not. Nevertheless, within our architecture, it should be possible to accommodate these...

Much like how we isolate mutual nodes with cyclic dependencies between them and clump them together in “ID Groups” so that we can more effectively tackle their problems in isolation, it should be possible to detect this particular case (since it will once again look like yet another cyclic dependency situation due to the links between the chains, with a key observation being that all of those links are hooked up to a single control property/state).

At worst, it turns out that detecting these cases is quite tricky and error prone, so we end up adding ways for users to explicitly tag (or give hints about) these situations for us (i.e. when in doubt, remember that we always have the option to “ask the user for more info” to clarify the situation for future runs). For example, the drivers used for this purpose could get a flag to indicate that they may be being used for this sort of thing, or (if we ever adopt a node-tree interface for doing this sort of setup work) we could provide explicit nodes to specify this sort of thing.

The proposed solution is to basically have a special node for this purpose – let's call it “BranchNSwitch” – which would live within ID-Groups. This is shown in the diagram below:

It would work as follows:

The specifics of how such scheduling would work out would still need to be worked out in detail later, when we have a clearer picture about that stuff – the main worry here is that we could get a race condition if nodes depending on the result of this switch manage to get run before the selected branch can be scheduled up, OR we'd get a wasteful single-core-sequentially-locked problem where this particular node does the evaluating of its subgraph itself (perhaps at the expense of preventing other nodes dependent on it and hopefully queued up for the same core from starting work).

Another interesting possibility is that this sort of mechanism could be used by cyclic resolvers as a way of dealing with those pesky “declarative constraints” scenarios (e.g. a system of Limit Distance constraints pointed at each other to keep a bunch of objects in close but freely moving relationship), but selectively breaking and mending links at different points which cycling through them.

Posted by Aligorith at 2:51 AM