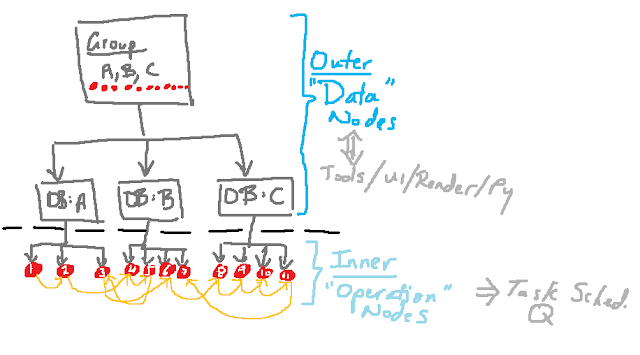 From what I've seen so far, it's quite obvious that the success (or failure) of a depsgraph system lives and dies by what we choose to represent with the nodes in the graph. With the wrong types of nodes, you're going to end up with heaps of problems in the resulting system. For example, you may not have enough detail to solve the certain problems (i.e. a lack of granularity results in unresolvable phantom cycles), or you may have too much fine grained data that you can't figure out where to start from (and find that system performance overall crawls along).

In Brecht's notes about various depsgraph design ideas (http://wiki.blender.org/index.php/User:Brecht/Depsgraph), he mentions that there are two basic types of nodes we can have in such graphs: Data Nodes and Operation Nodes.

Here's my current understanding of what these are:

Which Approach to Use?

After I first saw this, my initial reaction from reading it was something like: “Great. So, data nodes are essentially what we have now, likely complete with all the warts with this approach that we've seen so far. But, if they only represent data and not operations on data, then we're somewhat screwed with regards to trying to break up drivers and constraint stacks and making it possible to interleave them with other dependencies, since evaluating those effectively performs an operation of sorts. And, we can throw the ideas of node-based materials/constraints/yada yada out the window with it too!”. Basically, I had serious doubts whether we could achieve all of our goals (while leaving the door open for future extensions/cool stuff coming in) if we kept this as a purely “data” orientated view of the world.

However, upon re-reading this while writing up this post, I realised that perhaps the more important point here isn't whether we can represent operation-like nodes that we may get if/when splitting up existing data nodes to be more granular, but rather the problem of managing what actually happens with regards to memory management. The data based model is pretty clear about this (i.e. you can fetch the relevant data off the nodes in question once they've been evaluated; and evaluating them is simply a matter of going to a node, evaluating it, and then it is done), though it's not that clear how that'd work out in the end for data nodes which end up getting split into heaps of tiny little pieces (perhaps you could make a point of only fetching from the endpoint ones). The operation model however is murkier, as you have datastreams which mysteriously get created/merged/duplicated/etc. That's perhaps why we have things like Input/Result nodes in the Node Editor as clearly defined endpoints for these results. Another potential problem with such datastreams getting created/deleted all over in the background is that we could be in for a hell of a lot more weird and fiendishly hard to debug errors (much like the threading problems which we're now plagued with in the rendering/compositing areas).

Locality/Isolatability + Duplis
Then again, if we aim to do something about the Locality/Isolatability goals, then we're really going to have to be making multiple copies of data anyway. It's practically required as a matter of good threading hygine to do it, but also since with the way we've got things now, it's simply impossible to locally override settings for particular instances without causing all instances to end up only looking like the way that the last guy who touched that data left it. As a side effect of that, we'll need to be finding a way of extracting out or managing the data for those copies, which isn't really possible representing “data elements” which need evaluation. For instance, consider things like duplis and/or particles using those duplis: do we seriously want nodes representing each of these instances in the graph, even if they may only end up getting created part-way through the scene being evaluated?

Physics Sims
There is also the question of what to do about physics sims: do they realistically represent “data”, or are they purely “operations”? In the case of sims such as fluids, cloth, softbody, and smoke, it could be argued that since they're done as modifiers, that puts them in the category of “operations” (given our prior classification of these, and the fact that they have well defined inputs/outputs working on a datastream - “DerivedMesh” data).

Let's also consider rigidbody sims though. These operate on object level. While the actual mechanics of the simulation process are done inside a bit of a “blackbox”, what happens is that we are effectively evaluating the “RigidBodyOb data” on the objects when we do this. Furthermore, even if we split the evaluation step into two separate simulation runs or groups (as would be needed if we were to support the ability to parent objects to simulation objects, and then perhaps eventually have some of the children of those be part of a second simulation), then those “groups” themselves could perhaps be considered instances of “data” (in this case, several other “RigidBodyOb data” blocks that need evaluating).

RNA Updates and Other Use Cases
We also must not forget the problems we had earlier with RNA Update callbacks. As it stands, when some properties are updated, we must wait to perform a proper flushing step on the block level (instead of in the property set/change callbacks, where we only know about a single property and/or the local struct that this may reside in, which in some cases turns out to be far too restrictive, as sometimes the computations needed in response to property changes need to go up a few levels to access data stored elsewhere). Examples of this include the Mapping/Transform nodes, which currently cannot be animated/driven because we have no way of getting those property update callbacks – which are used to force the transform values set via the properties into the underlying matrix used to actually apply the node's effects – to run, without also inadvertantly causing some of the other RNA callbacks to start tagging other nodes for updates, thus triggering infinite loops in some setups.
Clearly it would be nice to find a way to handle these within the depsgraph structure, but once again, are they more “data” or “operation”?

All along, we've been assuming that these two types of graph design are mutually exclusive. Must it be that way? Can't we have a strong data-core (mainly tailored towards the simple cases with no multi-users/overlaps/tight-coupling), with operation nodes interleaved between these to smooth over some of the trickier aspects which need to take place split up? Or is this all just incoherrent babbling at the end of a long day of thinking and coding after getting a rude awakening in the morning when a bunch of arborists showed up to noisly cut down and mulch a tree that used to stand across the road?

A Hierarchical Composition/Split Model
Perhaps there's a way of having a bit of a split model combining both, using them where appropriate.

On an “outer” level, we have a bunch of predominantly “data”-orientated nodes, whose main purpose is make it easy to find/filter/flag nodes in the graph with changes. These would correspond to actual entities that the rest of Blender deals in (i.e. ID Blocks, RNA Structs/Properties, etc), so broad level changes can get easily filtered down to these. As such, they could also help to define the memory stores for where results ultimately end up, making it easy to fetch the results, and allowing us to pass these downwards to the actual operation snippets.

On an “inner” level, for each datablock, we have a bunch of “atomic operations” as detailed in "The Granularity Problem". These are basically “operation” nodes which perform the actual tasks of performing evaluation steps onto the given contexts (i.e. well defined inputs and outputs from the tightly boxed operations). Ultimately, although these operation nodes are housed within the toplevel groups, and the specific sets of steps/operations present are generated by the datablocks tier, at low-level, these operation nodes are still free to be able to be queued up and linked together to form a dense, interleaved network – that is, within a group, they are free to perform the types of things we described earlier when talking about granularity.

The following diagram tries to summarise the setup mentioned here: 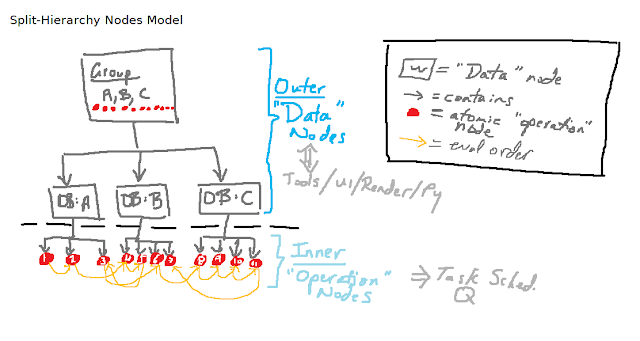 At this stage, this is still just quite a rough concept, but so far, it looks like the right way to go...
Posted by Aligorith at 1:53 AM