Suffice to say, I do a lot of serious work in a lot of "other" (non Microsoft) applications these days for most of my primary work. However, I finally ended up resorting to getting a copy of MsOffice again when faced with a series of recurring dilemmas for the nth time:
Although I didn't really need the 365 subscription (which MS are really ramming down everyone's throats), ultimately that bundle turned out the cheapest (and even cheaper than the student edition by over $100, with the dearer edition actually offering less functionality). It also included Publisher for once - something which would have been quite handy a few years back for school projects, but probably less relevant at the moment. That said, their fine print is quite murky on what exactly happens if your subscription lapses - we'll see in a year's time, as I purposefully put it on a card which will have expired before the renewel date next year, so it won't continuously leech away if there's no reason to justify its continued funding :)

Having known MsOffice since my first encounters with a computer in Dad's office, OneNote was definitely the new kid on the block. Supposedly it only came out some time in the past 3-5 years, since I don't recall seeing it in the last version of Office I installed. Regardless, I'd seen those press releases promoting how it was quite well integrated with the Surface Pro 3 (especially with the pen), so I was getting a bit curious about it.

Specifically, would that particular combo finally be responsive and fluent enough in usage to finally eke out my current practice of drawing diagrams on paper using pen or pencil? As it stands, I currently haven't found ANYTHING which quite beats the responsiveness and level of control that good old pen and paper offer (notably, since these days I can get a good variation of tonal weight out of a ballpoint pen, something many people don't realise is even possible). Personally, I've never liked whiteboards or found them to be much use, as they are generally too slippery, have accidental "erasure" issues (and associated problems with being able to refer back to past notes), tone control limitations, and the fact that they are mounted on ergonomically unsound angles. Heck, I've even been contemplating getting hold of one of those "Cintiq Companion" tablets in recent months - I don't mind splurging on it if it turns out to work well enough for what I need it to do, but I'd have to at least give one a test drive before buying one (given the price point of those devices).


Back to the issue of OneNote.

Seeing as it was already installed, I decided to give it a whirl to see what it had on offer. Having previously tried Evernote on my tablet, I didn't really expect much (Note: That trial didn't really end up going anywhere as it didn't seem to offer much value to the way I do things. Perhaps I just didn't use it for the right test cases... Or perhaps it was something else about the interface - see next points)

I was impressed with what I saw. 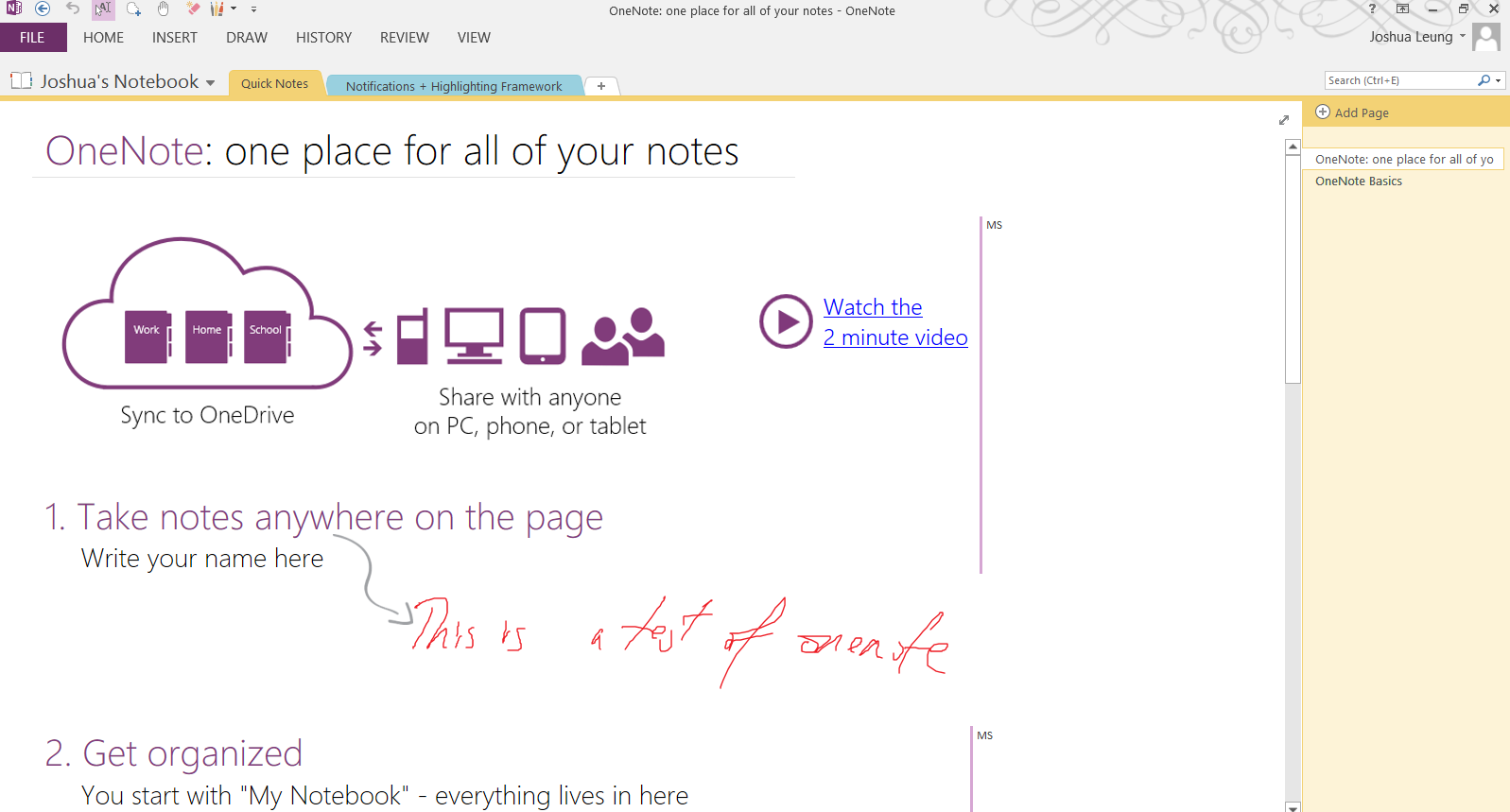 The welcome screen, with a quick test I made using the dodgy old digitizer I have lying around...

They had me sold when I saw the introduction notebook, with its inviting "Take notes anywhere on the page" line. Of course I had to try that, and managed to stumble across a bunch of other neat stuff that you could do in the process of trying to figure out how to do that (e.g. among other things, images, text, tables, shapes, and freehand scribbles can all be added anywhere on the canvas in an unstructured way). As I investigated further, I also found that it also seemed to have the ability to create "infinite canvases" by default - another capability I'd been hunting for for a very long time. Oh, and did I mention that it has built-in handwriting recognition which works somewhat well?

In other words, for once, it seemed that Microsoft had actually built a piece of actually really useful software. Of all vendors, it was Microsoft who had built the "virtual paper replacement" which justifies this title by actually doing all of what paper can but removing the limitations it has as a medium (notably offering an unbounded canvas, the ability to rearrange clusters of stuff as needed after its been created, and finally, search capabilities). This is essentially the piece of productivity software I'd wanted to have for years - and have always had on the backburner as something I'd have to seriously look into doing myself sometime as no-one else was stepping up to the plate to offer it.

But, does it have its warts? Absolutely.

It's software, and software made by Microsoft. To assume otherwise would be naive. But at most, they amount to being "nuisances" rather than dealbreakers. For example, here are my current peeves about the software:
1) Clunkiness switching between click-to-type mode and freehand drawing - Sure, I've already minimised these issues as much as possible by adding quick-switch buttons for that on the "Quick Tools" toolbar. But, that still only goes so far.

2) It'd be neat if there was a "mouse-over the collapsed Ribbon tabs to show the panels" feature, instead of choosing between not showing them at all (and potentially getting stuck on screen when you interact with one) or having the whole lot sitting there taking up screen-space all the time. That might just make these a lot more fluent to use... Either that, or just implement Joey's CommandMaps already for crying out loud!

3) The textboxes default to having a lot of extra empty padding around them. This ends up being hellish when trying to position small isolated floating textboxes near each other without accidentally extending an existing one. Argh! It's nearly as bad as when trying to draw diagrams using Office shapes, which brings up...

4) Overly coarse grid snapping is annoying! I want to be able to position things exactly where I want them, and nothing should get in my way (especially not some kind of grid-snapping algorithm trying to keep things aligned for no good reason). Snapping guides for lining things up horizontally/vertically are nice, but automatic compulsory snapping is not.

5) Yes, it has an infinite canvas, but it sure as hell tries to restrict you to just what you can fit on one screen! The automatic canvas resizing seems a bit dodgy, as it randomly grows larger and smaller. It'd be great if it could just be scrolled off freely, and then make however far you scrolled its new estimate for how large you want the canvas to be (until you need it larger).

6) Text alignment is not in the RMB formatting toolbar. Boo hoo! Almost every other useful option is, but for that one option I'm forced to click on the Ribbon (and risk having it randomly decide that it wants to hang out there for the rest of eternity). Speaking of text alignment, changing this occasionally makes the sizes of the textboxes blow out (especially when selecting right-align), something which kindof sucks!

7) The full screen "File menu" (common in all Office apps) and the overall "flat" look. I can't say I'm a fan, but at least it can be tweaked to be less harmful than the confusing blinding-white desert it looks like out of the box.

Regardless of these warts, the core functionality it provides seems to do a good job of what I need it to do. And that's saying a lot :)

To summarise, what I like about it is:
1) It provides a unstructured, infinite canvas that you can put almost anything on
2) You can scribble all over that canvas, and the automatic handwriting recognition will do a pretty darned awesome job picking up text you put in there
3) It's proving to be quite a great platform for doing "creative" (or "insight building") work, where you need to be able to freely dump anything and everything you need into some space, then be able to rearrange and reorder that stuff around until it makes sense.
Posted by Aligorith at 2:42 AM