So, this evening I ended up watching the film - The Big Year - that was playing on TV tonight. This was a comedy film released in 2011 about the three competitive bird watchers competing to see who can sight the most different species in a year. 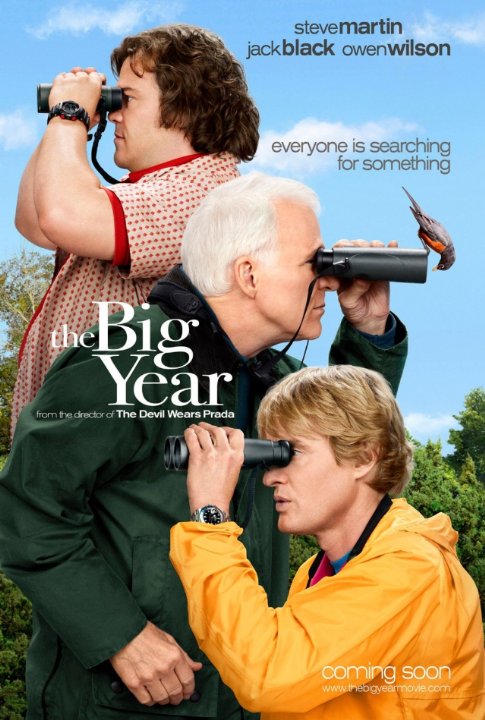 
Although I don't currently consider myself a serious bird watcher (at least as far as being motivated enough to go out on expeditions into the wilderness to specially track down rare species), regular readers of this blog will have noticed that I do like photographing and watching birds. Especially silvereyes, fantails, ducks (ducklings to be specific), and chicken. I've also become quite well versed in identifying these particular types of birds from their calls. Indeed, for successfully getting shots of silvereyes or fantails, I'd say that it's almost mandatory, since they startle easily and quickly change location by darting around.

Apart from planting more fruit and nectar-bearing plants, in the past year, I've also started leaving out bread for them (usually leftover multigrain or Salba bread - in particular, the seed-rich Salba always goes down really well; I dunno if it's the combination of sunflower, poppy, oats, and other grains, or whether it was a baker's heavy-handed mishap with the salt shaker though) having tried and failed to attract any takers with offers of fruit (then again, it's probably a sad reflection of the quality of fruit on sale in the local market vs what we peddle to offshore consumers via our lucrative export market... but I digress).

As such, it was quite entertaining watching a comedy about compulsive/competitive bird watchers. Aside from totally "getting" the underlying compulsions driving these characters, the character humour, and the general absurdity of the whole competitive camaraderie aspect of the "Big Year" competition (which is apparently a very real thing, and the subject of a book which inspired this film) were all particularly interesting factors.

But perhaps the best parts of this were the birds. In particular, there are quite a few shots featuring cute and pretty little fluff balls - red, blue, yellow, orange, bluish with white rings around its eyes, a "moulting American Finch" (from a distance, it almost looks like a bit like a Silvereye in that state) - sitting in trees or hopping around. There were also those of majestic owls, the colourful woodpecker, and a sequence showing the amazing courtship of bald eagles (where they are locked together in a steep dive, tumbling towards earth in freefall, before breaking off just above the ground). What would have been even better would have been to see even more of these as part of the film :)

Another very nice touch was how they labelled the different species that bird watchers were identifying using a handwritten font, with these labels placed in 3D space as if part of the landscape. Coming hot on the heels of working on Grease Pencil tools for integrating this sort of handwritten/freeform sketchy annotations integrated into 3D scenes, this was quite an inspiring effect that I'm eager to try making more use of in some practical scenes sometime.

So, overall, I thoroughly enjoyed this one. What a nice find for a relaxing Sunday evening :)
Posted by Aligorith at 1:46 AM